Northern peatlands are experiencing increased wildfire disturbance, threatening peatland biogeochemical function and ability to remain major stores of carbon (C) and macronutrients (nitrogen—N, and phosphorus—P). The impacts of climate change-driven drying on peatland nutrient dynamics have been explored previously; however, the impacts of wildfire on nutrient dynamics have not been examined when comparing burned and unburned areas in a post-fire fen. This study assessed the impact of wildfire on N and P bioavailability, change in CNP stoichiometric balance and feedback on plant nutrient limitation patterns in a fen peatland, one-year post-wildfire, by comparing Burned and Unburned areas. Water extractable P increased up to 200 times in shallow leachate, 125 times in groundwater and 5 times in peat. Surface ash leachate had increased concentrations in Ammonium (NH4+) and Nitrate (NO3−), and through groundwater mobility, increased extractable N concentrations were observed in peat throughout the entire fen. The net mineralization of N and P were minimal at the Burned areas relative to Unburned areas. Fire affected plant nutrient limitation patterns, switching from dominantly N-limited to NP co-limited and P-limitation in moss and vascular species respectively. The top 20 cm of the Burned area C concentrations was higher relative to the Unburned area, with increased CN and CP ratios also being found in the Burned area. These findings suggest that the long-term effects of elevated C, N, and P concentrations on plant productivity and decomposition must be re-evaluated for fire disturbance to understand the resiliency of peatland biogeochemistry post-wildfire. View Full-Text
Keywords: wildfire; peatland; nitrogen; phosphorus; nutrients wildfire; peatland; nitrogen; phosphorus; nutrients
►▼ Show Figures 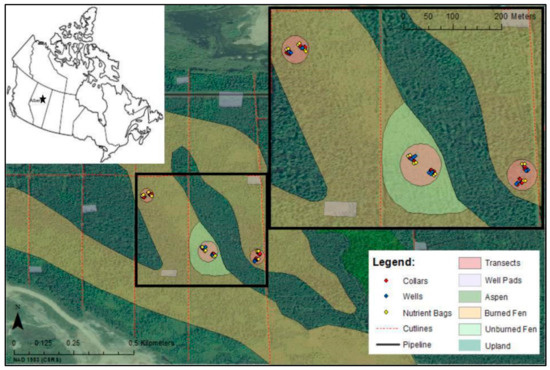