Risks of Mixtures of Oil Sands Contaminants to a Sensitive Mayfly Sentinel, Hexagenia
Next Article in Special Issue

An Introduction to the Study of Gastrotricha, with a Taxonomic Key to Families and Genera of the Group

Gastrotricha is a group of meiofaunal-sized, free-living invertebrates present in all aquatic ecosystems. The phylum includes over 860 species globally, of which 505 nominal species have been recorded in marine sandy sediments; another 355 taxa inhabit the freshwater environments, where they are recurrent members of the periphyton and epibenthos, and, to a lesser degree, of the plankton and interstitial fauna. Gastrotrichs are part of the permanent meiofauna and, in general, they rank among the top five groups for abundance within meiobenthic assemblages. The diversity, abundance, and ubiquity of Gastrotricha allow us to suppose an important role for these animals in aquatic ecosystems; however, ecological studies to prove this idea have been comparatively very few. This is mainly because the small size and transparency of their bodies make gastrotrichs difficult to discover in benthic samples; moreover, their contractility and fragility make their handling and morphological survey of the specimens rather difficult. Here we offer an overview, describe the basic techniques used to study these animals, and provide a key to known genera in an attempt to promote easy identification and to increase the number of researchers who may be interested in conducting studies on this understudied ecological group of microscopic organisms. View Full-Text
Keywords: benthos; biodiversity; key; meiofauna; taxonomy benthos; biodiversity; key; meiofauna; taxonomy
►▼ Show Figures 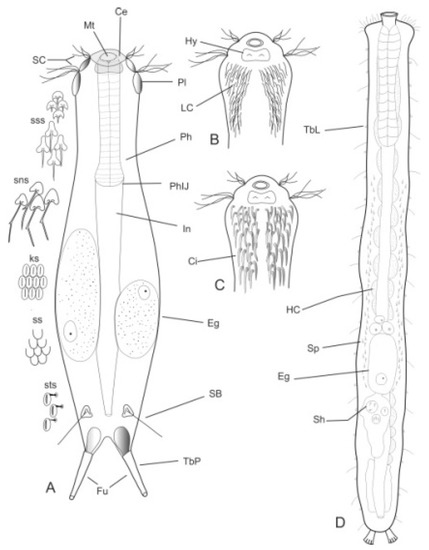 
Todaro, M. A.; Sibaja-Cordero, Jeffrey A.; Segura-Bermúdez, Oscar A.; Coto-Delgado, Génesis; Goebel-Otárola, Nathalie; Barquero, Juan D.; Cullell-Delgado, Mariana; Dal Zotto, Matteo. 2019. "An Introduction to the Study of Gastrotricha, with a Taxonomic Key to Families and Genera of the Group." Diversity 11, no. 7: 117.