By altering the phenotypic properties of their hosts, endolithic parasites can modulate the engineering processes of marine ecosystem engineers. Here, we assessed the biogeographical patterns of species assemblages, prevalence and impact of endolithic parasitism in two mussel species that act as important ecosystem engineers in the southern African intertidal habitat, Perna perna and Mytilus galloprovincialis. We conducted large-scale surveys across three biogeographic regions along the South African coast: the subtropical east coast, dominated by the indigenous mussel, P. perna, the warm temperate south coast, where this species coexists with the invasive Mediterranean mussel, M. galloprovincialis, and the cool temperate west coast dominated by M. galloprovincialis. Infestation increased with mussel size, and in the case of M. galloprovincialis we found a significantly higher infestation in the cool temperate bioregion than the warm temperate region. For P. perna, the prevalence of infestation was higher on the warm temperate than the subtropical region, though the difference was marginally non-significant. On the south coast, there was no significant difference in infestation prevalence between species. Endolith-induced mortality rates through shell collapse mirrored the patterns for prevalence. For P. perna, endolith species assemblages revealed clear grouping by bioregions. Our findings indicate that biogeography affects cyanobacteria species composition, but differences between biogeographic regions in their effects are driven by environmental conditions. View Full-Text
Keywords: Biogeographical region; Mytilus galloprovincialis; Perna perna; rocky shores; parasite Biogeographical region; Mytilus galloprovincialis; Perna perna; rocky shores; parasite
►▼ Show Figures 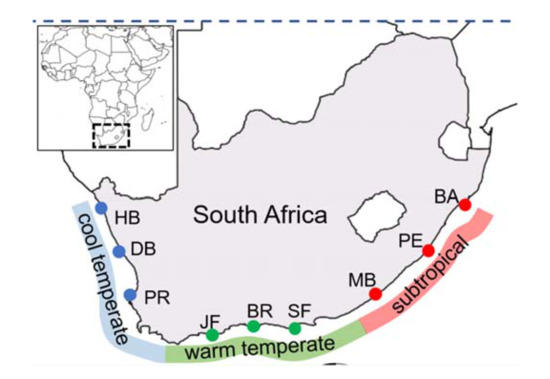