Do Local Environmental Factors and Lunar Cycle Influence Timing and Synchrony of Oviposition of a Turtle with Strict Nocturnal Nesting?
Previous Article in Special Issue

Intertidal fucoid algae can function as ecosystem engineers across temperate marine regions. In this investigation, we assessed the function of the alga dominating rocky reefs in temperate Australia and New Zealand, Hormosira banksii. Invertebrate and algal species assemblages were examined within areas of full H. banksii canopy, areas where it was naturally patchy or absent (within its potential range on the shore) and areas where the intact canopy was experimentally disturbed. Differences in species assemblages were detected between areas with natural variation in H. banksii cover (full, patchy, negligible), with defined species associated with areas of full cover. Differences were also detected between experimentally manipulated and naturally patchy areas of canopy cover. Species assemblages altered in response to canopy manipulations and did not recover even twelve months after initial sampling. Both light intensity and temperature were buffered by full canopies compared to patchy canopies and exposed rock. This study allows us to predict the consequences to the intertidal community due to the loss of canopy cover, which may result from a range of disturbances such as trampling, storm damage, sand burial and prolonged exposure to extreme temperature, and further allow for improved management of this key autogenic ecosystem engineer. View Full-Text
Keywords: macroalgae; facilitation; disturbance; invertebrates; intertidal reef macroalgae; facilitation; disturbance; invertebrates; intertidal reef
►▼ Show Figures 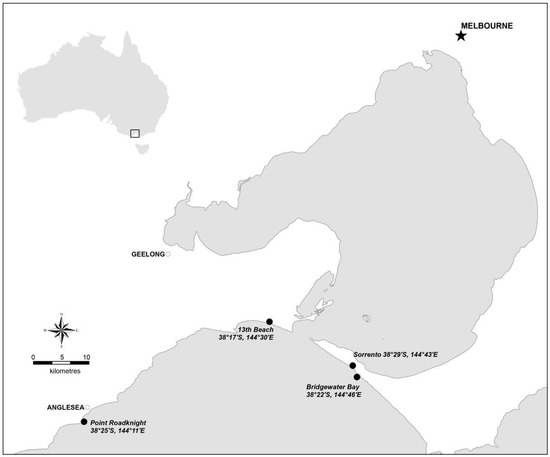