A Surfeit of Studies: What Have We Learned from All the Box Turtle (Terrapene carolina and T. ornata) Home Range Studies?
Next Article in Special Issue

Spatial and Temporal Variation in Fecundity of Acropora spp. in the Northern Great Barrier Reef

Latitudinal and Cross-Shelf Patterns of Size, Age, Growth, and Mortality of a Tropical Damselfish Acanthochromis polyacanthus on the Great Barrier Reef

Patterns of age and growth of a sedentary damsel fish Acanthochromis polyacanthus were tested over a latitudinal range of approximately 10 degrees (1200 km) on the Great Barrier Reef (GBR), Australia. Within latitudes, these patterns were also compared on reefs in distance strata (inner, mid, and outer) across a continental shelf that ranged in width from 52 to 128 km. Although variation in length-max (SLMAX), growth, age-max (AMAX), and the von Bertalanffy metrics of Linf and K were found within and among latitudes, the greatest variation in some demographic characteristics was found among distance strata across the shelf regardless of latitude. Fish were always relatively smaller at inner shelf reefs and grew more slowly when compared to mid and outer shelf reefs; this was true regardless of the color morph of fish. The oldest fish collected was 11 years old, and there was no consistent variation in age-max among distances from shore. On outer reefs, there was a negative linear relationship with age-max and latitude. This “tropical gradient” of age only explained 34% of the variation; furthermore, this was not found when only the oldest group of fish was considered (top 10%). Fish only reached an age-max of six years on the southernmost reefs. There was a trend for a smaller Linf with latitude but it was not significant and Linf did not vary predictably with water temperature. The sampling of marine protected areas (MPAs) and fished zones did not confound the resultant patterns in that fish were not consistently larger or older in MPAs or fished zones. Instantaneous mortality rates were 0.245–0.685; they were highest at inner reefs and also showed no consistent MPA-related patterns. Our study suggested that the mid and outer shelf waters of the GBR appeared best suited for growth of A. polyacanthus. In conclusion, the position on continental shelves dominated other geographical patterns and needs to be considered in spatial models of growth. We suggest that local environmental conditions such as turbidity and the quality and quantity of plankton likely have a strong influence on distance across the shelf-based demographic patterns of planktivores. View Full-Text
Keywords: reef fish; size; age; growth; mortality; Great Barrier Reef; Pomacentridae; cross-shelf; MPA; latitudinal gradients reef fish; size; age; growth; mortality; Great Barrier Reef; Pomacentridae; cross-shelf; MPA; latitudinal gradients
►▼ Show Figures 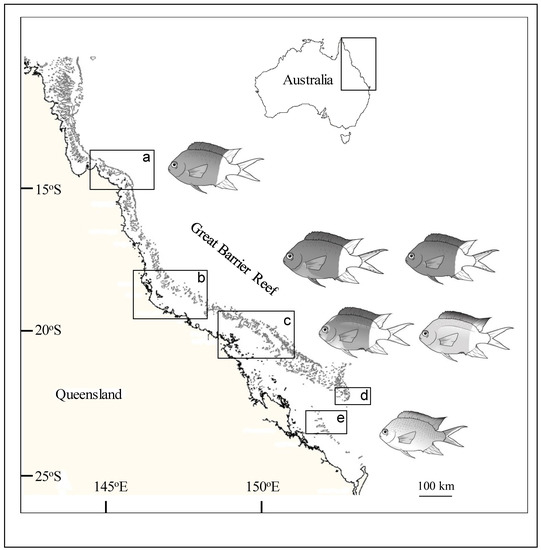