Climate change and the overall increase of seawater temperature are causing a poleward shift in species distribution, which includes a phenomenon described as the tropicalization of temperate regions. This work aims to report the first records of four species off the southwestern Iberian Peninsula, namely, the oceanic puffer Lagocephalus lagocephalus (Linnaeus, 1758), the Madeira rockfish Scorpaena maderensis Valenciennes, 1833, the ornate wrasse Thalassoma pavo (Linnaeus, 1758), and the bearded fireworm Hermodice carunculata (Pallas, 1766). These last three species, along with other occurrences of aquatic fauna and flora along the Portuguese coast, reveal an ongoing process of poleward expansion of several species, which urgently necessitates a comprehensive survey along the entire Iberian Peninsula. The putative origins of these subtropical and tropical species off continental Portugal are discussed, as well as the potential public health problems that two of the four reported species may cause.
Keywords: climate change; tropicalization; species distribution; range expansion; North Atlantic climate change; tropicalization; species distribution; range expansion; North Atlantic

The effects of climate change are becoming evident across oceans, through changes of sea level, ocean primary productivity, ocean acidification, water temperature, and shifts in species distribution ranges [1]. In some temperate regions, the increase in seawater temperature is causing a poleward movement of species—a phenomenon known as the tropicalization of temperate regions [2]. The global trend is that this tropicalization phenomenon is occurring in many marine ecosystems [3]. Along the west and east coasts of Australia, dense kelp forests are disappearing, with records of 100 km range contractions on the west coast which are then followed by increases in the populations of subtropical and tropical herbivorous fish that suppress kelp recovery [4,5,6]. Other important habitat-forming species, such as coral reefs, have been expanding their poleward distribution along the Japanese coast at a rate of up to 14 km/year [7]. Simultaneously, tropical fish species are settling in these regions and being able to withstand the colder winter waters off Japan [8]. In the northern region of the Gulf of Mexico, an increasing number of diverse southern tropical species (e.g., fish, manatees, turtles, warm-water corals, black mangroves) are reshaping the characteristic seagrass meadows [9]. Similar cases have been observed in the northern Mediterranean Sea since the early 1990s, where several southern warmer-water fish species have been recorded [2,10,11].
Along the southwestern and western coasts of the Iberian Peninsula (Europe), the distribution range of several algae species shifted northwards to the order of hundreds and thousands of kilometres [12,13]. There are also examples of new species being reported off southern Portugal, such as the brown mussel Perna perna (Linnaeus, 1758) [14] and the parrotfish Sparisoma cretense (Linnaeus, 1758) [15], which suggests that a wide array of species are shifting their northern distribution limit from northern Africa to the Atlantic coast of the Iberian Peninsula.
In this context, this work aims at reporting four new accounts of subtropical/tropical faunal species observed for the first time off the south coast of Portugal and in the Guadiana estuary (SE Portugal/SW Spain). These new records for the southwestern Iberian Peninsula include three Teleostei, i.e., the Madeira rockfish Scorpaena maderensis Valenciennes, 1833, the ornate wrasse Thalassoma pavo (Linnaeus, 1758), and the oceanic puffer Lagocephalus lagocephalus (Linnaeus, 1758), as well as a polychaete annelid, the bearded fireworm Hermodice carunculata (Pallas, 1766).

In the region off Portimão, observations were made during non-systematic recreational SCUBA dives at the three sites, which occurred between 9 am and 11 am. Specimens were photographed with a Canon G16 digital camera (12 megapixel resolution). The depth at which species were photographed was annotated, as were their size and sex whenever possible. Size was estimated by including an object in the photograph to be used for scale, while sex was determined based on the sexual dimorphism characteristics if the species displayed such traits.
In the Guadiana estuary, a local fisherman collected two specimens with a longline gear deployed overnight, but only one specimen was delivered to us for identification. In the laboratory, this specimen was identified and sexed, its total fresh weight (±1 g) was determined, several morphometric and meristic characteristics were measured and counted, and the stomach content analyzed.
The identification of species was based on the photographs taken and on the collected specimen, following the identification books of Saldanha [16] and Louisy [17].

The presence of the Madeira rockfish, ornate wrasse, and bearded fireworm off the southwestern Iberian Peninsula, and the possible presence of the oceanic puffer in the Guadiana estuary may represent examples of poleward-distribution range expansion of subtropical/tropical species. This hypothesis is supported by multiple lines of evidence from other species, as described in this paper. We advocate for the implementation of systematic surveys along the Atlantic coast of the Iberian Peninsula concomitantly with genetic analyses to test the tropicalization hypothesis. We also propose that these new fish species should be monitored and included in local fisheries management plans if their abundance increases.

J.E. (SFRH/BD/140556/2018) and V.B. (SFRH/BD/104209/2014) have Ph.D. scholarships funded by Foundation for Science and Technology (FCT). P.M. has a scholarship funded by the Delta Stewardship Council and Delta Science Program under Grant No. 1167. The contents of this article do not necessarily reflect the views and policies of the Delta Stewardship Council, nor does mention of trade names or commercial products constitute endorsement or recommendation for use. M.A.T. was funded by FCT, through the project UID/Multi/04326/2013, and by the European Regional Development Fund (COMPETE Program, Operational Competitiveness Program).

We would like to acknowledge the Subnauta diving center for assistance with logistics in Portimão and Mr. Antero Fernandes for reporting to us the capture of another new species in the Guadiana estuary. Two anonymous reviewers made important suggestions to improve the initial version of this paper. 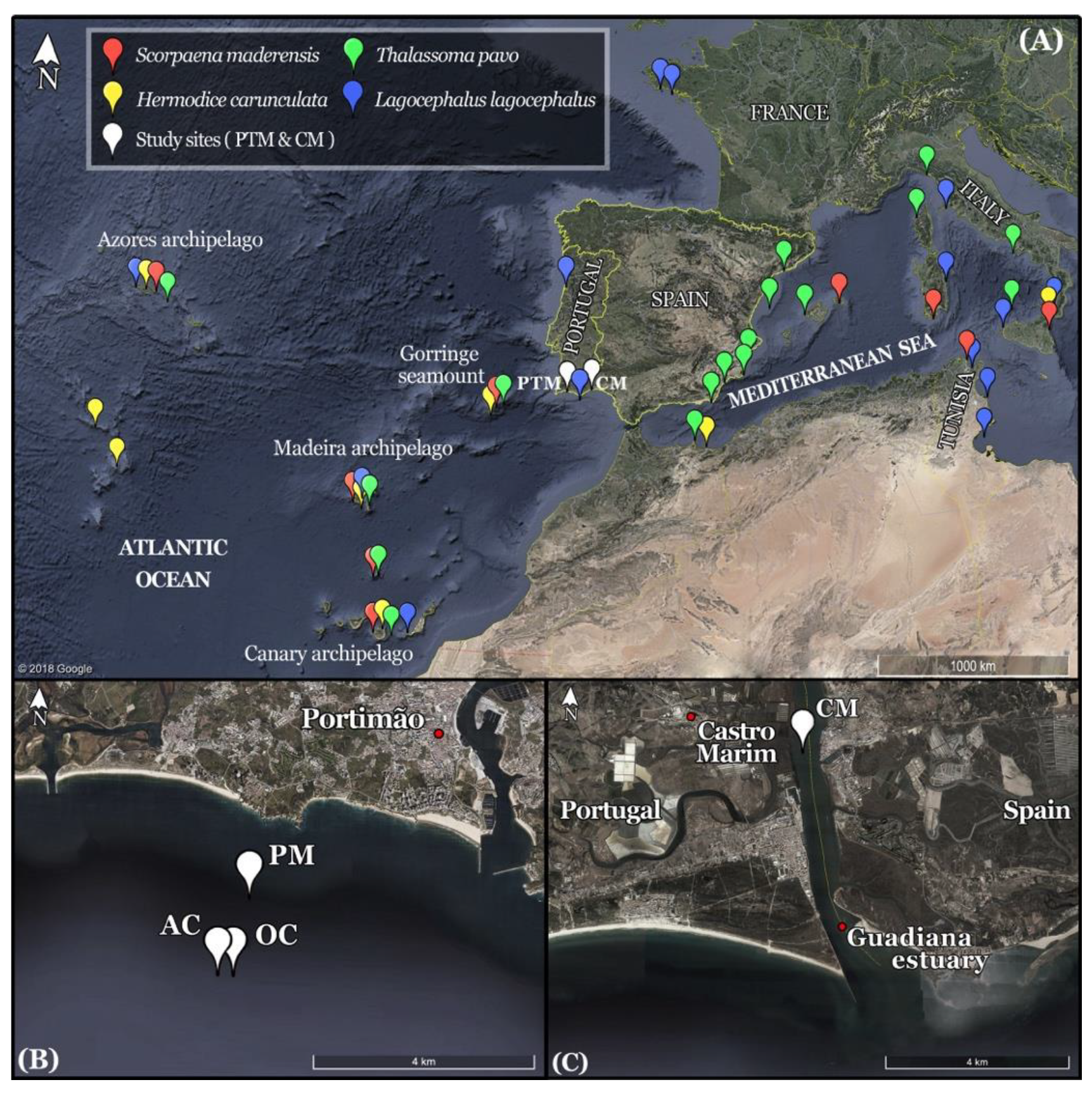 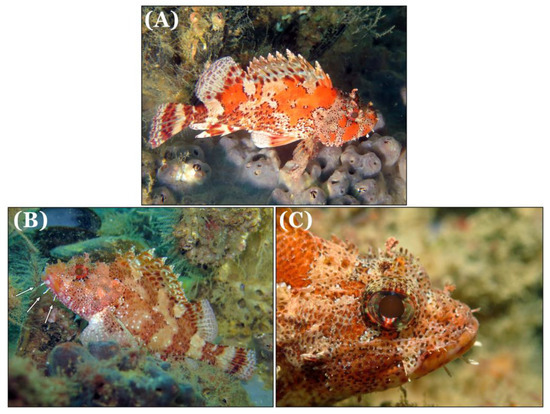 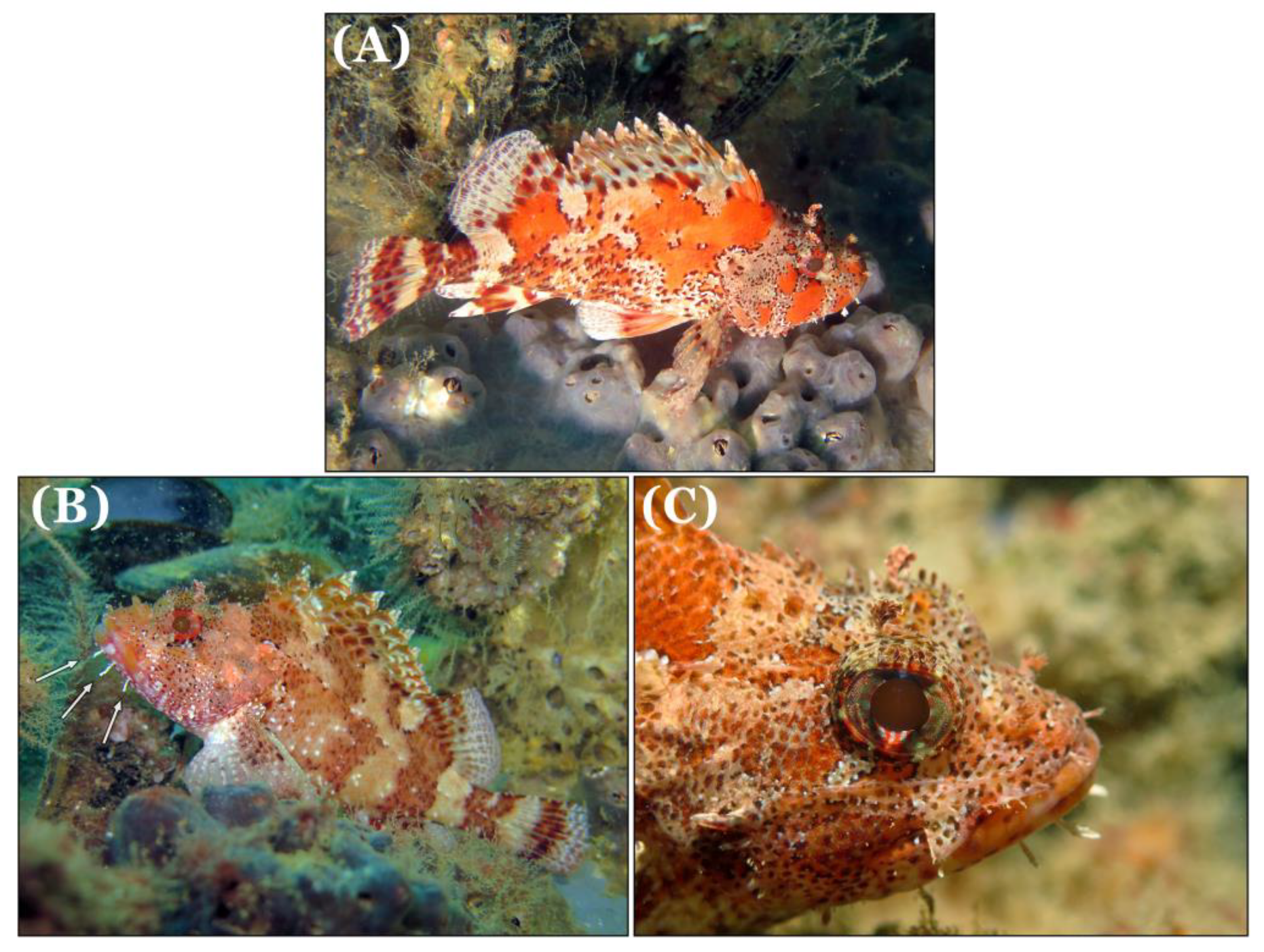 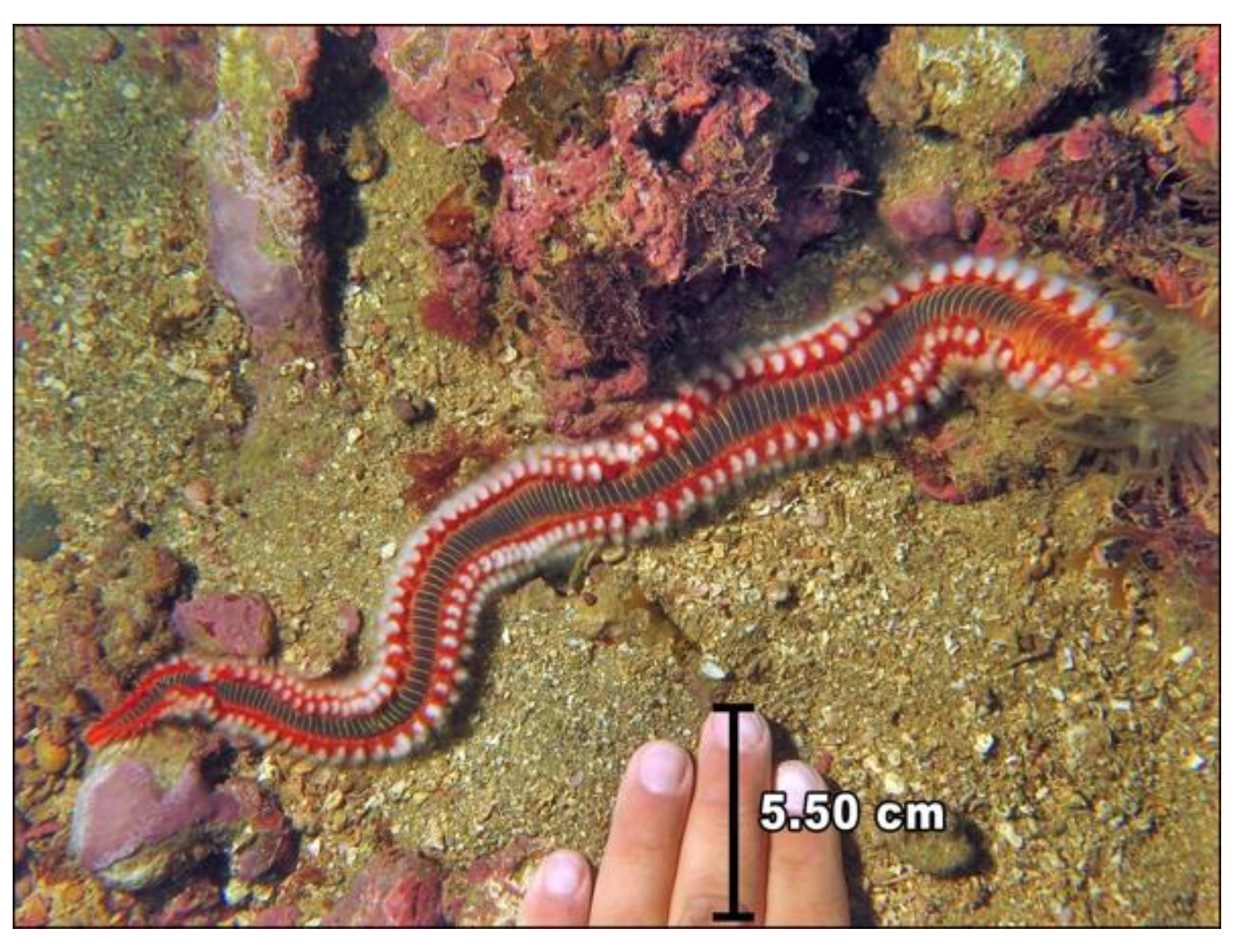