Cryoconservation of Animal Genetic Resources in Europe and Two African Countries: A Gap Analysis
Next Article in Special Issue

Bioindication of the Influence of Oil Production on Sphagnum Bogs in the Khanty-Mansiysk Autonomous Okrug–Yugra, Russia

Ecological Mapping in Assessing the Impact of Environmental Factors on the Aquatic Ecosystem of the Arys River Basin, South Kazakhstan

Assessment of the water quality of the Arys River basin based on the spatial distribution of richness of phytoperiphyton communities and abiotic variables was given for the first time. Altogether, 82 species were revealed in phytoperiphyton, including Bacillariophyta of 51, Cyanobacteria of 20, Chlorophyta of 7, and Charophyta of 4. Cluster analysis revealed the uniqueness of the composition of periphyton communities related to the abiotic conditions. The environmental preferences of the algae indicated fresh organic pollution in the lower reaches of the Arys River and weak or moderate levels of organic pollution in the rest of the basin. The ecological mapping of chemical data generally confirmed this conclusion. According to the maps, the highest water quality was revealed in the upper stream of the basin. The middle part of the river basin had the lowest water quality in terms of transparency, nitrite-nitrogen, and nitrate-nitrogen. The downstream of the Arys was characterized by a secondary deterioration in water quality according to the Aquatic Ecosystem State Index (WESI) index. We revealed the complicated interaction between natural and anthropogenic factors that caused changes in water quality in the Arys River basin. View Full-Text
Keywords: phytoperiphyton; river; bioindication; ecological mapping; water quality phytoperiphyton; river; bioindication; ecological mapping; water quality
►▼ Show Figures 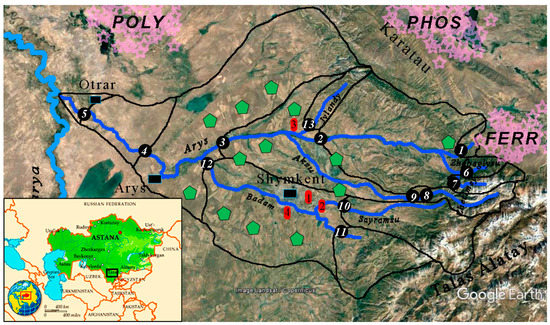