A Review of the Effects of Climate Change on Chelonians

Matrix models and perturbation analyses provide a useful framework for evaluating demographic vital rates crucial to maintaining population growth. Determining which vital rates most influence population growth is necessary for effective management of long-lived organisms facing population declines. In Illinois, the state-endangered Spotted Turtle (Clemmys guttata) occurs in two distinct populations, and management can benefit from an understanding of its demographic behavior. We conducted a mark–recapture study on both populations in 2015 and 2016 and used historical mark–recapture data from 1988 to 2010 to determine female age-specific survival and fecundity rates. Survival increased significantly with age, and age-specific reproductive output and fecundity were >1.0. However, both populations exhibited net reproductive rates below replacement levels, and one population had a negative growth rate. Summed elasticities for all adult age classes indicate adult survival has the highest proportional impact on population growth. We found evidence of demographic divergence between the two populations, and thus the prioritization of vital rates varied somewhat between sites, with a relatively higher emphasis on juvenile and young adult survival for one population. We recommend conservation actions such as habitat management and predator control, which will have positive impacts across stage classes. View Full-Text
Keywords: Clemmys guttata; conservation; demography; ecology; herpetology; matrix; population; spotted turtle Clemmys guttata; conservation; demography; ecology; herpetology; matrix; population; spotted turtle
►▼ Show Figures 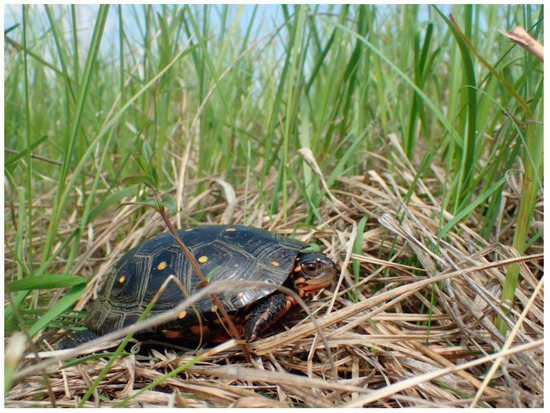