Old Processes, New Movements: The Inclusion of Geodiversity in Biological and Ecological Discourse

Forests are ecosystems that are extremely productive, representing approximately 30% of the whole global land area, and display great spatial heterogeneity because of their multi-layered vegetation [1]. Forests frequently act as carbon sinks with huge quantities of recalcitrant organic matter in their soils [2]. Abundance of trees in forests is a notable feature that distinguishes them from other biomes [3]. The composition of soil microbial communities plays pivotal roles in the productivity of forests and in soil functioning [4,5,6]. Soil microbial communities perform important roles in the biogeochemical cycles, thereby contributing to the fertility and functioning of soil ecosystems. The loss of diversity in soil ecosystems has functional consequences [7,8]. Bacterial activities in forest soils are extremely important because they facilitate majority of the biogeochemical processes and eventually regulate the accessibility of mineral nutrients in the soils [9]. The composition of bacterial communities can be influenced by the modification of the physical, biological and chemical properties of soils by land management practices [10,11]. Crucial ecosystem functions such as carbon sequestration, the control of climate and water purification are closely associated to microbial activities and influenced by the conversion of land-use [12]. Intensive anthropogenic perturbations like the transformation of natural lands into managed lands have been reported to intensely alter soil microbiota. Approximately 40% of lands worldwide have been transformed into controlled systems and about 85% of them are affected by anthropogenic activities in one way or the other [13,14,15]. Humans have increased the immensity of land-use and land-use change is the most direct indication of the influences of human actions on the natural environment. [16]. A considerable fraction of forests has been used up for timber mining and agricultural development as a result of the growing demand for human security [17,18,19].
The diversity of terrestrial biomes is diminished by the substitution of native vegetation with a few crops and this causes the degradation of land, loss of biodiversity and depletion of nutrient in the soil, among other concerns. Through the provision of functional diversity and redundancy, a high microbial diversity is thought to be essential for the maintenance of ecosystem stability [20]. Even though soil bacteria have been investigated for a long time, most of its diversity is still not explained because this domain is among the most copious and diverse set of organisms on Earth [21]. Forest soil bacterial communities perform significant functions; however, most studies have focused on fungal communities in this environment. While the knowledge of forest soil bacterial ecology has progressed considerably in recent years, it is still partial [1]. A thorough ecological comprehension of soil bacterial species will enhance the capacity to actively control these microbes for the advancement of their functional proficiencies [21].
The role of soil bacteria in ecosystem functioning can be affected by the same factors that influence their community composition [11]. An understanding of the response of soil bacteria to land-use change would therefore enable predictions of their influence on the soil ecosystem functioning. Thus, we investigated the influence of land-use change in forest ecosystems on bacterial diversity using the high-throughput 16S rRNA amplicon sequencing approach. Culture-independent 16S ribosomal RNA sequencing has been extensively used in recent times to examine bacterial diversity from numerous environments since sequencing of PCR-amplified 16S rRNA overcomes the drawbacks of culture-based bacterial detection [22]. We hypothesized that the different vegetation types and the environmental conditions of the sampling sites would affect the diversity of the bacterial communities inhabiting the soils. We also proposed that the indigenous forests that are natural would have more diverse bacterial communities relative to the managed pine forests.

Using a 2 mm mesh, the samples were sieved to remove debris. The soil pH was measured by mixing 2 g of fresh soil in 10 mL deionized water using a Jenway 3520 pH-meter (Cole-Parmer Instruments, Staffordshire, UK). The size of the soil particles was classified according to the method used by Enagbonma, et al. [23]. Total carbon and nitrogen were measured using the dry combustion method as described by Santi, et al. [24]. Soil nitrate was determined by KCl extraction method. Organic carbon in the soil was determined by the Walkley Black method [25]. Soil calcium, sodium, magnesium and potassium were examined after extraction using 1 M ammonium acetate at pH 7.0. Thereafter, magnesium, sodium and calcium in the extracts were measured using an atomic absorption spectrophotometer while potassium was measured through a flame photometer [26]. Phosphorus was measured with a spectrophotometer [27].

Total genomic DNA was extracted from 0.25 g of soil using the PowerSoil® DNA isolation kit (MoBio Laboratory, Carlsbad, CA, USA) according to the manufacturer’s instructions. The examination of the bacterial community was carried out using 16S amplicon sequencing. The 16S rRNA gene variable region V4 was sequenced using an Illumina MiSeq sequencer by the Next Generation Sequencing Service at Molecular Research LP (MR DNA, Shallowater, TX, USA). Employing the PCR primers 515F (5′-AATGATACGGCGACCACCGAGATCTACAC TATGGTAATT GT GTGCCAGCMGCCGCGGTAA-3′) and 806R (5′-CAAGCAGAAGACGGCATACGAGAT TCCCTTGTCTCC AGTCAGTCAG CC GGACTACHVGGGTWTCTAAT-3′), paired-ends reads of 312 bp were obtained [28]. Data analysis was carried out using the MR DNA analysis pipeline and MG-RAST. The paired ends were joined; barcodes, sequences < 150 bp and sequences with ambiguous base calls were removed. The sequences were then denoised and screened for the presence of chimeras. Analogous sequences were binned into operational taxonomic units (OTUs). OTUs were defined by clustering at 3% divergence (97% similarity). Final OTUs were taxonomically classified using BLASTn against a curated database derived from RDPII and NCBI [29]. Rarefaction was used to estimate species richness while Shannon and evenness indices were used to depict the alpha diversity. The diversity indices were evaluated across sites using the Kruskal–Wallis test and all the analyses were carried out using PAST version 3.20 [30]. Taxonomic richness was expressed as an OTU number. Sequences used in this study have been deposited in the Sequence Read Archive (SRA) of the National Center for Biotechnology Information (NCBI) under the bioproject numbers SRR8136388 (WC), SRR8136221 (WI), SRR8135323 (TC) and SRR8134476 (TI).

The Shinyheatmap [31] was used to plot a graph of the relative abundance of bacterial communities at phylum level. The bacterial community composition (abundance data of relative OTU) was analyzed using principal coordinates analysis (PCoA) [32] based on a Bray-Curtis distance matrix using CANOCO 5 (Microcomputer Power, Ithacha, NY, USA). Permutational multivariate analysis of variance (PerMANOVA) was performed to evaluate the significance of land-use types [33] using the software R 3.3.3 (R Core Development Team 2017) [34]. The correlations between physicochemical parameters were determined by one-way ANOVA with Tukey’s HSD test using the SPSS package (v25.0). P < 0.05 were considered statistically significant. CANOCO 5 was also used to carry out the canonical correspondence analysis (CCA), which was used to evaluate the likely connections between microbial communities and the measured physicochemical parameters. To find the environmental variables that best explained bacterial composition, the forward selection of environmental properties and the Monte Carlo permutation test was employed. For the significance test, 999 random permutations were used. The environmental variables enumerated in Table 1 were used as explanatory variables in the CCA analysis.

3.1. Soil Properties (Physical and Chemical) of the Forest Soil Samples

The richness of the bacterial diversity in the forest soil samples was assessed by rarefaction analysis (Figure 2). The results revealed that the rarefaction curves for indigenous forests (WI and TI) were higher than the commercial forests (WC and TC).

RDP classifier was employed for the assignment of sequence reads of the indigenous and commercial forest soils into OTUs with 3% nucleotide cut-off values. The Shannon and evenness indices are also estimated in Table 2.

The PCoA plot showed no sample-type-specific clustering and resolution of individual sample datasets, which depicts significant difference (PerMANOVA, P = 0.001) in the bacterial composition between the indigenous and commercial forest soils (Figure 3). These data suggest that there are differences in the features of the individual datasets when compared to each other.

3.5. Phylum and Genus Level Distributions of the Bacterial Communities

The metagenomic rapid annotations using subsystems technology (MG-RAST) at http://www.mg-rast.org [35] was used to assign sequence tags of indigenous and commercial forest samples into different taxa. Figure 4 sums up the relative abundance of bacterial phyla for each sample. The indigenous forests were predominated by the phyla Proteobacteria, Bacteroidetes, Acidobacteria, Spirochaetes, Cyanobacteria, Dictyoglomi and Tenericutes, whereas the commercial forests were predominated by Planctomycetes and Nitrospirae (Figure 4). Figure 5 shows the relative abundance of the bacterial genera for each site. In the indigenous forests, Chthoniobacter, Candidatus Koribacter, Candidatus Solibacter and Ktedonobacter were the predominant genera while the commercial forests were dominated by Chthoniobacter, Candidatus Solibacter, Bradyrhizobium and Ktedonobacter.

The relationship between the measured soil physicochemical parameters and the relative abundances within bacterial phyla was investigated using the canonical correspondence analysis. Three parameters, including total C, pH, and P, were selected for CCA based on the significant test (Figure 6) and, as shown in Table 3, they are the environmental factors that best explained variation in bacterial composition.

The examination of belowground communities in temperate forests presented evidence that environmental variables are crucial drivers of soil bacterial diversity, abundance and community composition. This has explicit consequences for the functioning of the soil ecosystem. These results provide further evidence that the patterns of distribution of soil bacteria and their structure undergo spatial heterogeneity. The characterization of abiotic properties of soils provides perception on the factors that influence the diversity of soil bacterial communities and how these communities are altered. Additional evidence from manipulative and extensive experiments is essential.
The structure of soil microbial communities is mainly affected by land-use change. Even though forest plantations are being recommended as avenues for the sequestration of the increased atmospheric CO2, they can alter soil microbial community structure as substantiated by this study. The replacement of indigenous forests with plantations should therefore be prevented completely, if possible. This is necessary for ecosystem sustainability.

A.E.A. and O.O.B. designed the study; A.E.A. conducted the field and laboratory components; A.E.A. and O.O.B. made substantial contributions to the analysis and interpretation of data. A.E.A. wrote the first draft of the manuscript and both authors contributed critically to drafts. Both authors approved the article for publication.

A.E.A. would like to thank the North-West University for postdoctoral bursary and research support. Work in O.O.B. lab is based on support by the National Research Foundation of South Africa (Grants Ref: UID81192, UID105248, UID95111; O.O.B.). The authors are also grateful to Philip Hongwane of South African Forestry Company Limited (SAFCOL) for help with sample collection. 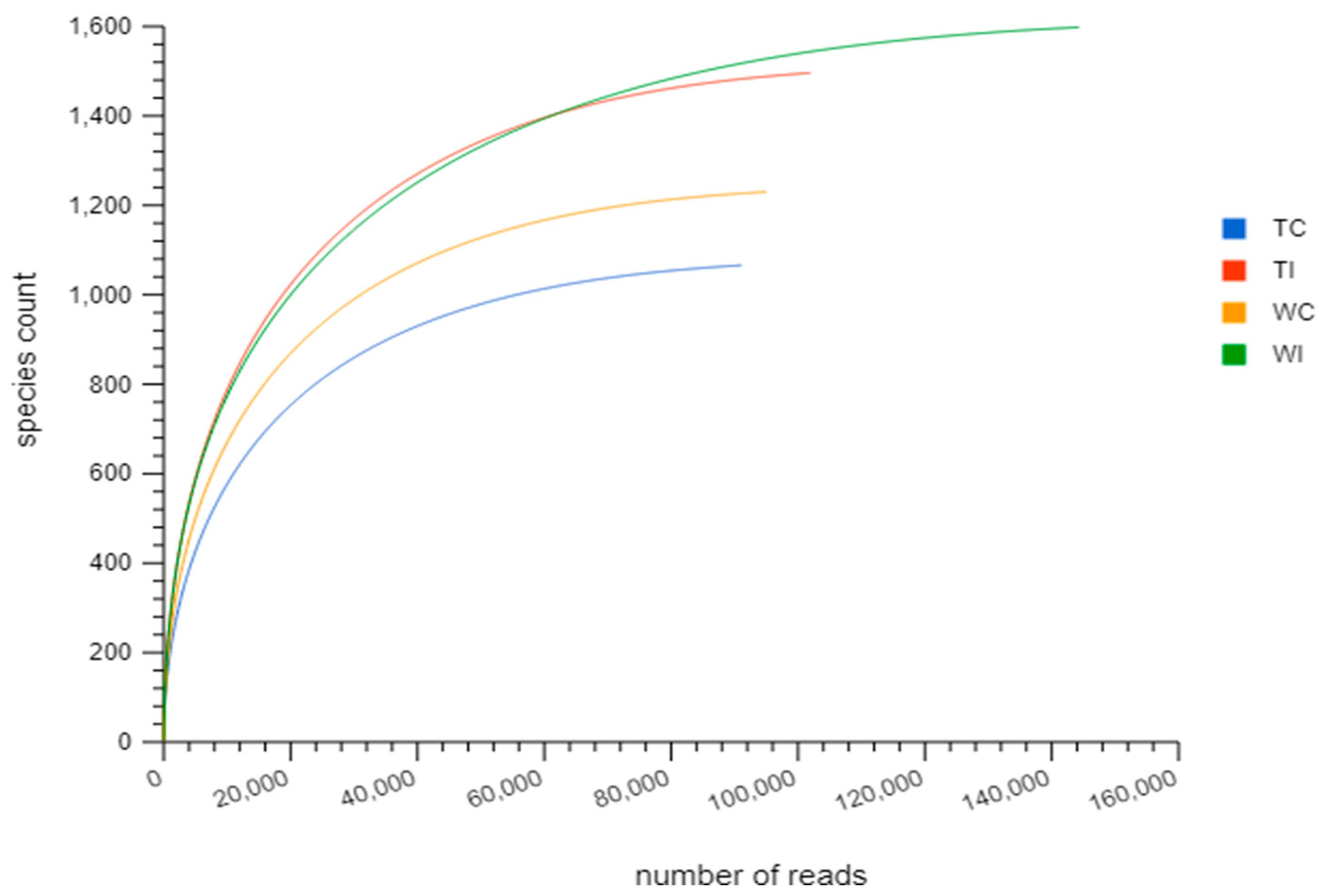 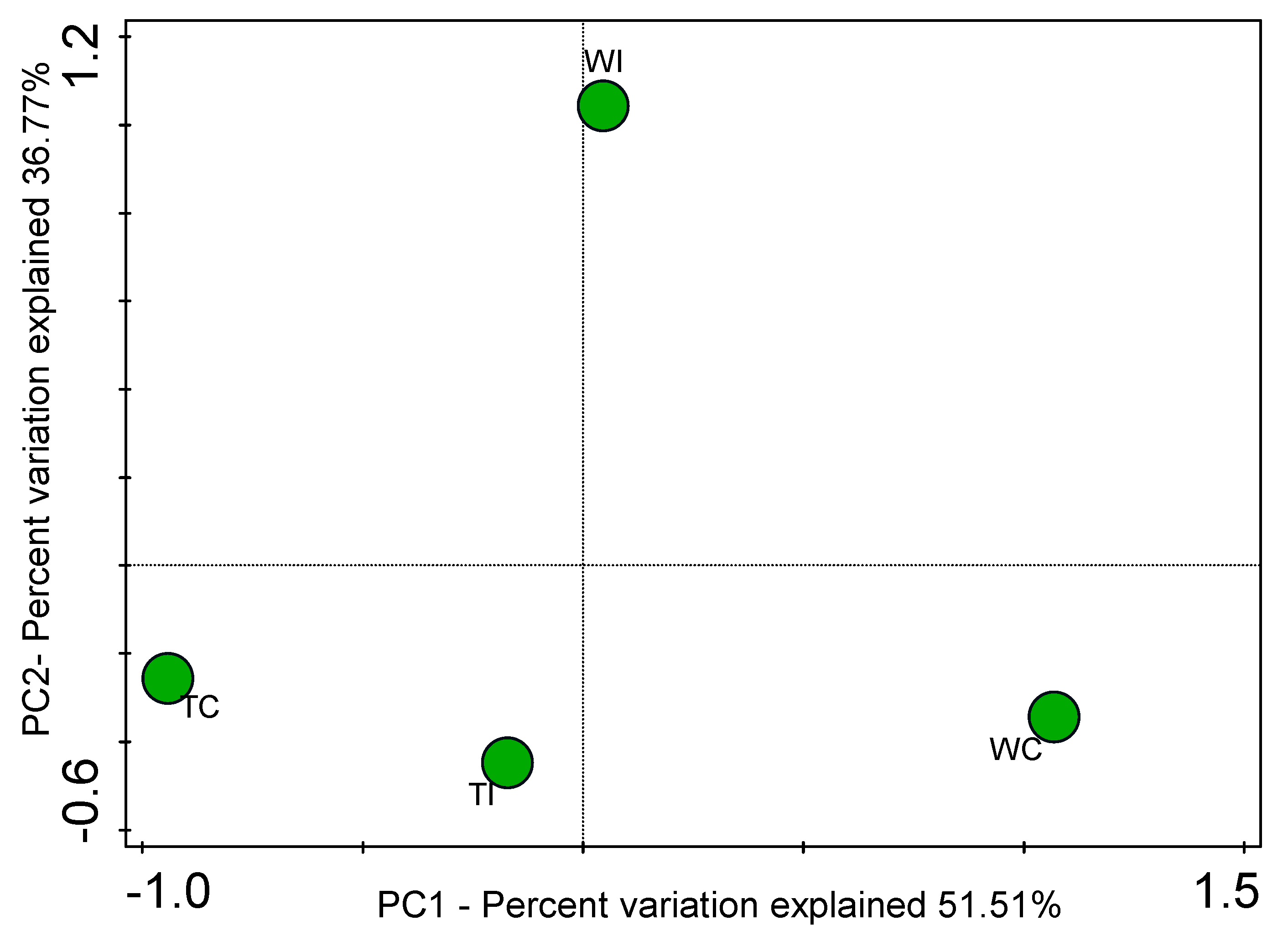