Old Processes, New Movements: The Inclusion of Geodiversity in Biological and Ecological Discourse

There exists substantial variation in the qualitative and quantitative interpretations of the concept of geodiversity and its embedded elements and values. The resulting divergence and ambiguity in applications of the term constrain its present use as an operationalized concept in nature conservation research and discourse, unlike its seemingly analogous biotic term, ‘biodiversity’. This paper presents findings from a critical literature review of 299 academic journal articles and texts that define geodiversity values, or otherwise incorporate geodiversity or its derived elements and values as components of conservation. Contrary to previous suggestions, we have found that most geoscientists have united behind a single definition of geodiversity and applied it frequently in their primary and applied, geotouristic, research. Qualitative elements of geodiversity, including system support values and aesthetic appeals within nature conservation, have been largely confined to geoconservation and geoscientific literature and are nearly absent from biological discourse. Encouragingly, however, we have observed a more recent increase in research pertaining to quantitative interpretations of abiotic geodiversity elements and their relationship with the spatial distribution and abundance of species. Although the inclusion of geodiversity elements (quantitative and qualitative) in conservation assessment and biodiversity research has been and remains far less universal than for biodiversity elements, there is strong potential for further unification of these two concepts, especially though collaborative quantitative research. The more that geodiversity is discussed outside of geographic and geoscientific disciplines, broader recognition and validated use of the concept of geodiversity will be used in the understanding, interpretation, and protection of patterns and processes at the landscape scale. View Full-Text
Keywords: geoheritage; geoconservation; GIS; geoparks; soils; rocks; minerals; landforms geoheritage; geoconservation; GIS; geoparks; soils; rocks; minerals; landforms
►▼ Show Figures 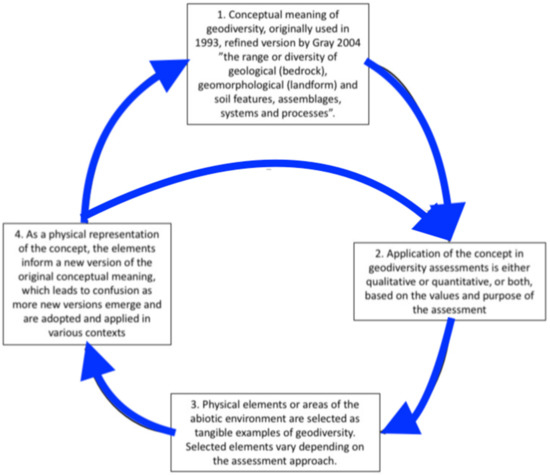