Egestion Versus Excretion: A Meta-Analysis Examining Nutrient Release Rates and Ratios across Freshwater Fauna
Next Article in Special Issue

Potential Invasion Risk of Pet Traded Lizards, Snakes, Crocodiles, and Tuatara in the EU on the Basis of a Risk Assessment Model (RAM) and Aquatic Species Invasiveness Screening Kit (AS-ISK)

The need for improved aquaculture productivity has led to widespread pressure to introduce the Genetically Improved Farmed Tilapia (GIFT) strains of Nile tilapia (Oreochromis niloticus) into Africa. However, the physical and regulatory infrastructures for preventing the escape of farmed stocks into wild populations and ecosystems are generally lacking. This study characterized the genetic background of O. niloticus being farmed in Ghana and assessed the genetic effects of aquaculture on wild populations. We characterized O. niloticus collected in 2017 using mitochondrial and microsatellite DNA markers from 140 farmed individuals sampled from five major aquaculture facilities on the Volta Lake, and from 72 individuals sampled from the wild in the Lower Volta River downstream of the lake and the Black Volta tributary upstream of the lake. Our results revealed that two farms were culturing non-native O. niloticus stocks, which were distinct from the native Akosombo strain. The non-native tilapia stocks were identical to several GIFT strains, some of which showed introgression of mitochondrial DNA from non-native Oreochromis mossambicus. We also found that the non-native cultured tilapias have escaped into the wild and interbred with local populations, and also observed potentially admixed individuals on some farms. Our results highlight aquaculture as a vector in the spread of invasive non-native species and strains, and underscore the importance of genetic baseline studies to guide conservation planning for wild populations. View Full-Text
Keywords: mitochondrial DNA; microsatellites; phylogenetic analysis; Oreochromis niloticus; Oreochromis mossambicus; D-loop; COI; hybridization mitochondrial DNA; microsatellites; phylogenetic analysis; Oreochromis niloticus; Oreochromis mossambicus; D-loop; COI; hybridization
►▼ Show Figures 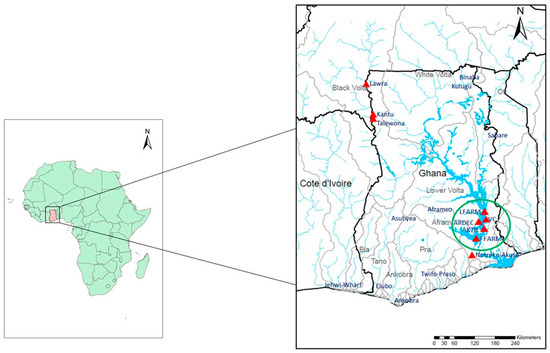