Soil nitrogen abundance, as well as nitrogen use efficiency (NUE), significantly affect the crop yield and grain protein content (GPC). Depending on the genotype, a negative correlation between the yield and GPC can occur. The aim of the study was to assess the agronomic performance, and to explore physiological pathways for the efficient use of N fertilizer for two durum wheat cultivars, “Aureo” and “Vespucci”. After fertilization, the nitrogen content and values of some of the agronomic parameters and yield-related traits increased in both cultivars; nevertheless, a simultaneous rise in both the yield and GPC occurred only in Aureo. The biochemical parameters, analyzed at tillering, confirm the genotypic specificity of nitrogen use. In Vespucci’s roots, the nitrogen supply did not affect the nitrate reductase (NR), but greatly increased the amino acids and proteins, suggesting that ammonium is preferentially assimilated. In Aureo, nitrate is in part assimilated by the roots, as suggested by the ammonium increase and NR enhancement. In the leaves of both cultivars, organic nitrogen significantly increased after fertilization; however, the rise in amino acids, as well as in NR activity, was higher in Aureo than in Vespucci. These results indicate that the different nitrogen use, and in particular the diverse NR behavior, at tillering, are in part responsible of the cultivar differences in grain yield and GPC. View Full-Text
Keywords: durum wheat; grain protein content; grain yield; nitrogen metabolism; nitrogen use efficiency durum wheat; grain protein content; grain yield; nitrogen metabolism; nitrogen use efficiency
►▼ Show Figures 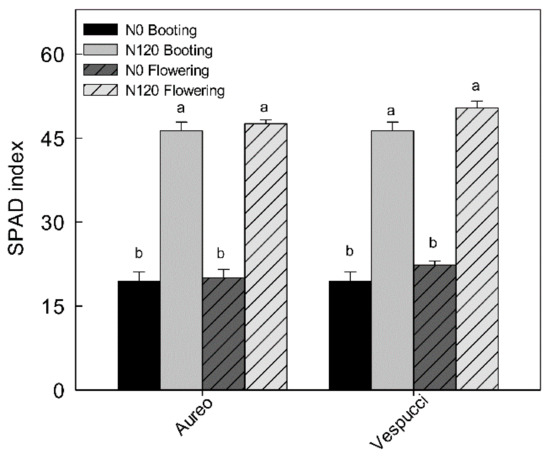