North American Speyeria butterflies are a group of conservation concern and a challenge to butterfly systematists. Establishing species delimitation and evolutionary relationships among Speyeria has proven difficult due to the polytypic nature of many species, coupled with the similarity of wing patterns of sympatric species. Recent molecular work has found not all Speyeria species to be monophyletic, which could be explained by improper species definitions, incomplete lineage sorting, or ongoing hybridization and introgression. However, these studies involved broad geographic sampling where molecular markers such as the DNA barcode may be especially subject to incomplete lineage sorting. Here we focus on a more local scale, analyzing the mitochondrial gene cytochrome oxidase subunit I (CoI) to test whether this marker recovers four sympatric Speyeria species: adiaste (W. H. Edwards, 1864), callippe (Boisduval, 1852), coronis (Behr, 1864), and zerene (Boisduval, 1852), in the greater San Francisco Bay Area. We found that CoI works well to separate all four species. Subspecies were less well-defined, with the S. adiaste subspecies clustering separately, but more mixed for the S. zerene and S. callippe subspecies. Overall, our analyses illustrate the utility of the DNA barcode for separating the Speyeria species and suggest further studies to investigate different geographic scales in order to elucidate genetic diversity patterns in this genus in North America. View Full-Text
Keywords: Argynnis; cytochrome oxidase subunit I; mitochondrial DNA Argynnis; cytochrome oxidase subunit I; mitochondrial DNA
►▼ Show Figures 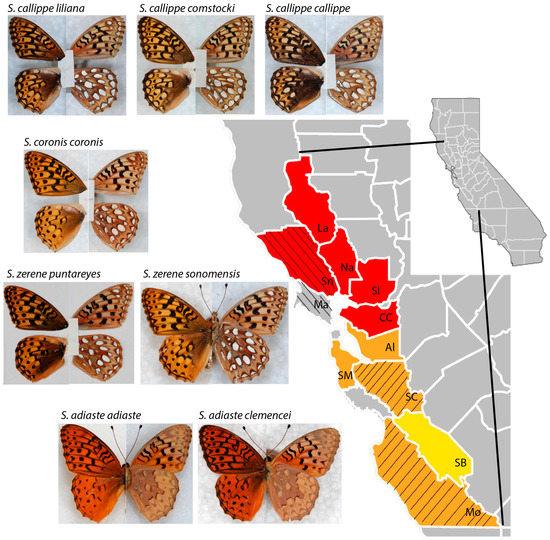