Species of the Cochlospermaceae, a small mostly pantropical plant family, were evaluated at a continental scale for medicinal uses in traditional medicine. This ethnobotanical information was placed in a phylogenetic framework to make informed predictions in the search for new medicines and bioactive compounds. Medicinal plant-use data were mapped onto a molecular phylogeny based on DNA sequences of nuclear and chloroplast markers. Associations of medicinal uses among closely related species occurring in different geographic regions and among diverse cultures were evaluated. The most common medicinal uses for these species are those used to treat skin ailments, gastro-intestinal problems, malaria, and liver issues. The plant species with the most numerous uses is Cochlospermum tinctorium, which occurs primarily in West Africa. Closely related species being used by cultural groups in different geographic regions to treat the same illnesses suggests the presence of bioactive compounds with potential biomedical value, since they may represent independent discoveries of similar medicinally-active compounds. This leads to the speculation that those closely related species not currently being used to treat these ailments may also contain identical or similar medicinally-active compounds and are worthy of laboratory investigations. View Full-Text
Keywords: Cochlospermaceae; Cochlospermum; Amoreuxia; medicinal plants; comparative ethnobotany; phylogenetics; molecular systematics; biogeography; culture; pharmacology Cochlospermaceae; Cochlospermum; Amoreuxia; medicinal plants; comparative ethnobotany; phylogenetics; molecular systematics; biogeography; culture; pharmacology
►▼ Show Figures 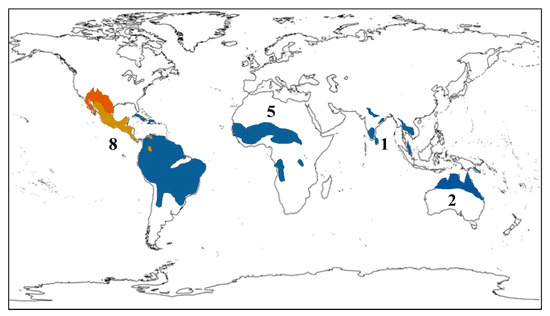 
Johnson-Fulton, Susannah B.; Watson, Linda E. 2018. "Comparing Medicinal Uses of Cochlospermaceae throughout Its Geographic Range with Insights from Molecular Phylogenetics." Diversity 10, no. 4: 123.