Plant-derived compounds have successfully inspired the drug discovery process which has exploited the entire structure of such natural products or part of that to develop new medicinal drugs [1,2].
Polyphenols and related compounds are secondary metabolites which occur naturally in plants and which have been reported to display protective effects in plant-based diet [3].
Indeed, food containing polyphenols are known to exert beneficial effects after long term consumption offering protection against the development of cancers, cardiovascular diseases, diabetes, osteoporosis, and neurodegenerative diseases [4,5,6]. In particular, for some substances such as flavan-3-ols, the beneficial effects are not due to the compounds present in planta but rather to the related enteric metabolites. As recently reported in the literature by our group, 5-(3′,4′-dihydroxyphenyl)-γ-valerolactone (1), which was identified as a metabolite in human urine after consumption of standardized and rich polyphenols dietary supplement [7], displays inhibition of Candida albicans adhesion.
The synthetic precursor of the 5-(3′,4′-dihydroxyphenyl)-γ-valerolactone (1) is the γ-alkylidenebutenolide (2) featured by a α,β-unsaturated γ-lactone core which bears a substituent at the gamma position (Figure 1).
This structural moiety characterizes in turn a large class of bioactive natural products endowed by a wide range of biological activities, such as inhibition of cholesterol biosynthesis−xerulin (3a), xerulinic acid (3b) and diihydroxerulin (4)—[8], cytotoxicity−goniobutenolides A (5a) and B (5b) and nostoclides (6)—[9], antimicrobial activity−rubrolide (7)—[10]. Some of these representative γ-alkylidenebutenolide are reported (Figure 2).
For these reasons stereoselective preparation of γ-alkylidenebutenolide continues to be an important issue for organic chemists.
A considerable amount of naturally occurring γ-alkylidenebutenolide have the Z configuration and most of them lack a β-substituent as demonstrated by compounds 3a, 3b, 4, 5a, and 5b.
Although the E-isomers are less stable than the Z-counterparts, in the absence of a β-substituent the formation of Z-isomers remains small [11]. Therefore, traditional synthetic strategies including alkylidenation of preformed oxacycles as butanolides and 2-silyloxyfurans, to the best of our knowledge, are nonstereoselective [12]. Alternative methods offer stereochemical predictability and high level of selectivity but need stereodefined precursors, chiral ligands, or removable stereocontrol elements [13,14,15]. Since the biological activity of compounds featuring a γ-alkylidenebutenolide is due to this core, we focus our attention on preparing the 5-(3′,4′-bis(benzyloxy)benzylidene)furan-2(5H)-one via a stereocontrolled reaction (2a Z-isomer, 2b E-isomer; Scheme 1).

(Z)-5-(3′,4′-Bis(benzyloxy)benzylidene)furan-2(5H)-one 2a was synthesized via vinylogous Mukayama aldol reaction (Scheme 1). The reaction was performed one-pot by adding diisopropylethylamine (DIPEA) under nitrogen atmosphere to a solution of 2(5H)-furanone in dry tetrahydrofuran (THF). The mixture was stirred for 30 min at room temperature, and after cooling down to −10 °C, tert-butyldimethylsilyltrifluoromethanesulfonate and 3,4-bis(benzyloxy)benzaldehyde were added dropwise. The mixture was stirred 2 h and subsequently 1,8-diazabicyclo[5.4.0]undec-7-ene (DBU) was added. The reaction mixture was stirred overnight at room temperature, then the solvent was removed under vacuum. Optimization of work-up and purification methods gave the title compound as an orange oil (Z)-isomer (52% yield).

The vinylogous Mukayama aldol reaction [16] is the critical step since it drives the stereoselectivity of the γ-alkylidenebutenolide of our interest that is the 5-(3′,4′-bis(benzyloxy)benzylidene)furan-2(5H)-one.
We decided to use tert-butyldimethylsilyltrifluoromethanesulfonate (TBDMSOTf) which serves as both silylating agent and Lewis acid catalyst. We began our investigation treating the commercially available 2(5H)-furanone with DBU either to form the intermediate 2-tert-butyldimethylsiloxyfuran (11) or to dehydrate it. After several unsatisfactory attempts in which we obtained the mixture of the E- and Z-isomers we started an insightful theoretical investigation of the possible transition states.
Encounter between the C1 and C5 atoms of the aldehyde and furan respectively could occur through the si faces or the si and re faces. Accordingly to what was reported by Jefford et al. [17], the resultant two pairs of staggered arrangements A, B and, C, D will produce the threo (12), while the other two pairs A’, B’ and, C’, D’ will lead to the formation of the erythro (13) aldols (Scheme 2). Moreover, in accordance with the vinylogous Mukayama reaction mechanism the Lewis acid TBDMSOTf coordinates the aldehyde with syn orientation. Thus, the prevalence of one arrangement over the other depends only on steric and electronic factors. The least hindered arrangements should be A and B’. Since the arrangement A is Diels–Alder like it is favored and it pushes for the threo selectivity.
The anion equivalent 10 would avoid the arrangements C and C’ because the charge would be better dispersed in D and D’ as confirmed by the density-functional theory (DFT) calculations (D’ = 0.00 kcal/mol; D = +2.11 kcal/mol; C’ = +6.99 kcal/mol; C = +4.44 kcal/mol).
We also applied the DFT quantum mechanical calculations to further investigate the Diels–Alder-like arrangements. To simplify the calculation and to focus attention on the simulated vinylogous Mukayama aldol reaction, the tert-butyldimethylsilyl group was replaced by a methoxy group, while the benzyloxy substituents were removed.
As shown in Figure 3, the DFT quantum mechanical calculations allow to reach five main considerations:

5.
Moreover, a weak non-classical intramolecular hydrogen bond involving C’6-H’6-O1 shown in Figure 4 plays an important role in the stabilization of the Z-isomer.

Considering these assumptions, we used DIPEA for the formation of the 2-tert-butyldimethylsiloxyfuran to enhance a diastereoselectivity coming from the Diels–Alder transition state since the use of the DBU alone allows the formation of anion 10 which would adopt D and D’ arrangements giving reason to the E/Z mixture formation thus a partial threo diastereoselectivity. As supposed and well explained by the Diels–Alder-like orientation of the reactants and by the quantum mechanics calculations, the use of DIPEA for the formation of 12 and DBU to eliminate the TMDMOH gave only the Z-isomer.
The obtained compound exhibited the expected spectroscopic signals (1H-NMR, 13C-NMR, ESI-MS and HRMS in the Supplementary Materials) confirming the successful synthesis of Z-γ-alkylidenebutenolide 2a. Using Figure 4 as reference, the 1H-NMR (CDCl3) spectrum shows confirmatory assignments accordingly to Chang et al. [18] such as the doublet and the singlet integrating as one hydrogen each for H3 and H6 (6.15 d, J = 5.3 Hz and 5.91 s, 1H).

This research received no external funding. The APC was funded by MDPI.

The data presented in this study are available in Supplementary Materials. 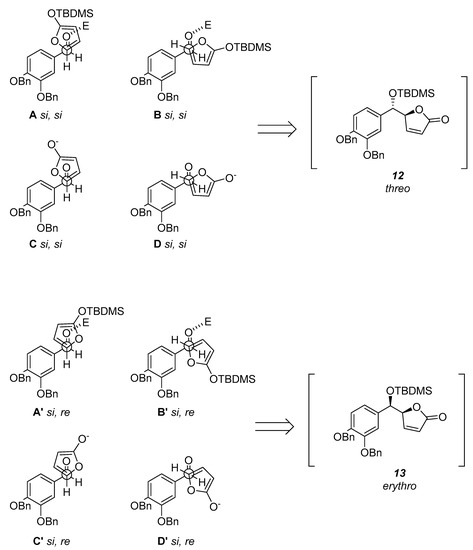