Chitosan (Chit) and its composite films are widely used in biomedical, cosmetic, and packaging applications. In addition, their properties can be improved and modified using various techniques. In this study, the effect of the type of clay in Chit composites on the structure, morphology, and physical properties of Chit solution and films was tested. The liquid flow properties of Chit solution with and without clay were carried out using the steady shear test. Chit films containing clay were obtained using the solution-casting method. The morphology, structure, and physical properties of the films were characterized by scanning electron microscopy, atomic force microscopy, infrared spectroscopy, swelling behavior, and tensile tests. The results reveal that for the Chit solution with clay (C1) containing 35 wt.% dimethyl dialkyl (C14–C18) amine, the apparent viscosity is the highest, whereas Chit solutions with other clays show reduced apparent viscosity. Rheological parameters of Chit composites were determined by the power law and Cross models, indicating shear-thinning behavior. Analytical data were compared, and show that the addition of clay is favorable to the formation of intermolecular interactions between Chit and clay, which improves in the properties of the studied composites. View Full-Text
Keywords: chitosan; clay; rheological properties; surface properties chitosan; clay; rheological properties; surface properties
►▼ Show Figures 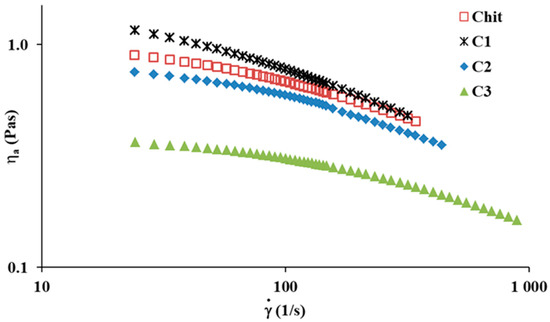