The complete molecular mechanisms underlying the pathophysiology of Alzheimer’s disease (AD) remain to be elucidated. Recently, microRNA-455-3p has been identified as a circulating biomarker of early AD, with increased expression in post-mortem brain tissue of AD patients. MicroRNA-455-3p also directly targets and down-regulates APP, with the overexpression of miR-455-3p suppressing its toxic effects. Here, we show that miR-455-3p expression decreases with age in the brains of wild-type mice. We generated a miR-455 null mouse utilising CRISPR-Cas9 to explore its function further. Loss of miR-455 resulted in increased weight gain, potentially indicative of metabolic disturbances. Furthermore, performance on the novel object recognition task diminished significantly in miR-455 null mice (p = 0.004), indicating deficits in recognition memory. A slight increase in anxiety was also captured on the open field test. BACE1 and TAU were identified as new direct targets for miR-455-3p, with overexpression of miR-455-3p leading to a reduction in the expression of APP, BACE1 and TAU in neuroblastoma cells. In the hippocampus of miR-455 null mice at 14 months of age, the levels of protein for APP, BACE1 and TAU were all increased. Such findings reinforce the involvement of miR-455 in AD progression and demonstrate its action on cognitive performance. View Full-Text
Keywords: Alzheimer’s disease; microRNA; miR-455; knockout; APP; TAU; BACE1; novel object recognition; memory; anxiety Alzheimer’s disease; microRNA; miR-455; knockout; APP; TAU; BACE1; novel object recognition; memory; anxiety
►▼ Show Figures 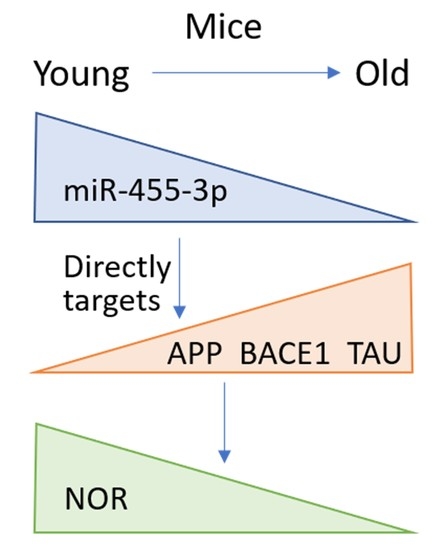