The effect of perinatal asphyxia (PA) on oligodendrocyte (OL), neuroinflammation, and cell viability was evaluated in telencephalon of rats at postnatal day (P)1, 7, and 14, a period characterized by a spur of neuronal networking, evaluating the effect of mesenchymal stem cell (MSCs)-treatment. The issue was investigated with a rat model of global PA, mimicking a clinical risk occurring under labor. PA was induced by immersing fetus-containing uterine horns into a water bath for 21 min (AS), using sibling-caesarean-delivered fetuses (CS) as controls. Two hours after delivery, AS and CS neonates were injected with either 5 μL of vehicle (10% plasma) or 5 × 104 MSCs into the lateral ventricle. Samples were assayed for myelin-basic protein (MBP) levels; Olig-1/Olig-2 transcriptional factors; Gglial phenotype; neuroinflammation, and delayed cell death. The main effects were observed at P7, including: (i) A decrease of MBP-immunoreactivity in external capsule, corpus callosum, cingulum, but not in fimbriae of hippocampus; (ii) an increase of Olig-1-mRNA levels; (iii) an increase of IL-6-mRNA, but not in protein levels; (iv) an increase in cell death, including OLs; and (v) MSCs treatment prevented the effect of PA on myelination, OLs number, and cell death. The present findings show that PA induces regional- and developmental-dependent changes on myelination and OLs maturation. Neonatal MSCs treatment improves survival of mature OLs and myelination in telencephalic white matter. View Full-Text
Keywords: hypomyelination; oligodendrocyte; myelination; neonatal asphyxia/ischemia; apoptosis; mesenchymal stem cells; telencephalon; rat brain; neuroinflammation; periventricular leukomalacia hypomyelination; oligodendrocyte; myelination; neonatal asphyxia/ischemia; apoptosis; mesenchymal stem cells; telencephalon; rat brain; neuroinflammation; periventricular leukomalacia
►▼ Show Figures 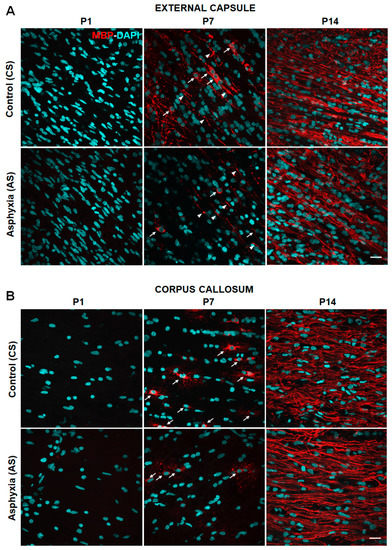