A Tryptophan ‘Gate’ in the CRISPR-Cas3 Nuclease Controls ssDNA Entry into the Nuclease Site, That When Removed Results in Nuclease Hyperactivity
Previous Article in Special Issue

Bone modeling initially occurs during development, where there are two modes of bone development: intramembranous ossification and endochondral ossification [1]. In intramembranous ossification, mesenchymal tissues are directly converted to bone, while in endochondral ossification, mesenchymal tissues are differentiated into cartilage before being replaced by bone [1]. Bone remodeling is a life-long process in which the volume of bone resorbed by osteoclasts (OCs) is restored by bone-forming osteoblasts (OBs) [2]. A balance between OC and OB activity is crucial in maintaining physiological bone turnover rates, and a flaw in this balance can lead to debilitating bone diseases, such as rheumatoid arthritis (RA), periodontal diseases, and osteoporosis [3]. Thus, maintaining the biomechanical integrity of bone by either modeling or remodeling is a complex process regulated by numerous cell lineages, transcription regulation, a network of cytokines, and growth factors [2,4]. Adequate understanding of the regulation of OC and OB activity in bone tissue is crucial for the development of novel therapeutics to manage bone-related diseases. We have previously reviewed the role played by cytokines in regulating OC differentiation, also known as osteoclastogenesis, under physiological and pathophysiological conditions [2,3]. In this article, we review the current knowledge of the impact of cytokines in OB differentiation, also known as osteoblastogenesis.

This research was supported by the research fund of Chungnam National University. 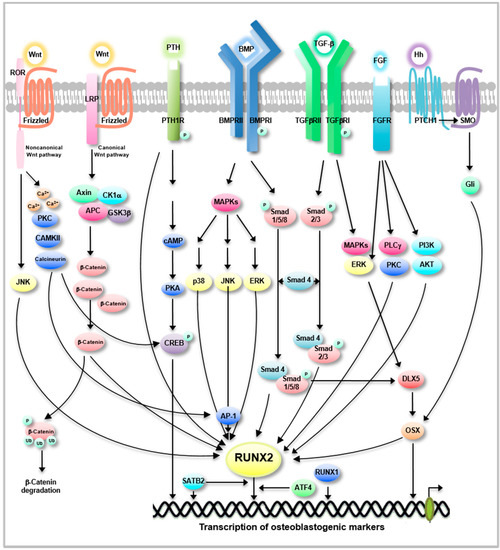