MicroRNA156 (miR156) and miR529 have high sequence similarity and recognize overlapping sites in the same target genes, SQUAMOSA promoter binding protein-like (SPL or SBP box) genes, making it difficult to accurately distinguish their roles in regulatory networks that affect numerous biological functions. Here, we collected data about miR156 and miR529 family members from representative land plants and performed sequence comparisons, phylogenetic analysis, small RNA sequencing, and parallel analysis of RNA ends (PARE) analysis to dissect their evolutionary and functional differences. Although miR156 and miR529 are highly similar, there are differences in their mismatch-sensitive regions, which are essential for target recognition. In land plants, miR156 precursors are conserved mainly within the hairpin region, whereas miR529 precursors are conserved outside the hairpin region, including both the 5’ and 3’ arms. Phylogenetic analysis showed that MIR156 and MIR529 evolved independently, through divergent evolutionary patterns. The two genes also exhibit different expression patterns, with MIR529 preferentially expressed in reproductive tissues and MIR156 in other tissues. PARE analysis revealed that miR156 and miR529 possess specific targets in addition to common targets in maize, pointing to functional differences between them. Based on our findings, we developed a method for the rapid identification of miR529 and miR156 family members and uncovered the evolutionary divergence of these families, providing insights into their different regulatory roles in plant growth and development. View Full-Text
Keywords: miR156; miR529; SQUAMOSA promoter binding protein-like genes; evolution; land plants miR156; miR529; SQUAMOSA promoter binding protein-like genes; evolution; land plants
►▼ Show Figures 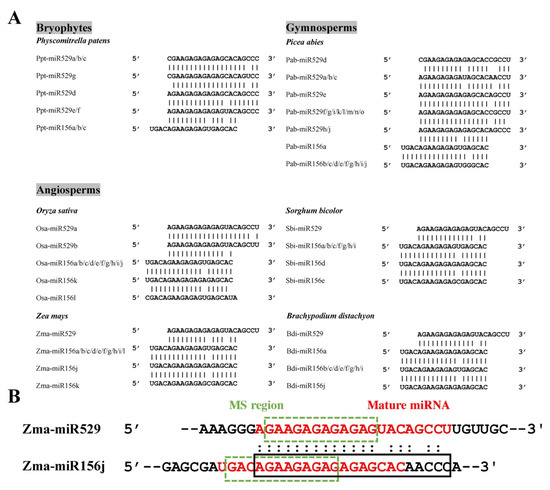