Nucleic acids, ribonucleic acid (RNA) and deoxyribonucleic acid (DNA), are hereditary macromolecule biopolymers composed of nucleotide subunits. Each nucleotide contains a five-carbon sugar coordinated with a 5′ phosphate group, a 3′ hydroxyl group, and a 1′ pyrimidine or purine nitrogenous base. Strands of nucleotides have a 5′ phosphate group at one end and a 3′ hydroxyl group at the other, to which new nucleotides are added, resulting in 5′ to 3′ sense or 3′ to 5′ antisense directionality. DNA consists of two antiparallel nucleotide strands in a double helix structure joined together by hydrogen bonds that link complementary nitrogenous bases: guanine with cytosine and adenine with thymine [1,2]. This complementary DNA base pairing is highly specific and utilised in molecular diagnostics for infectious disease pathogen detection [3]. Nucleic acid amplification diagnostics, such as polymerase chain reaction (PCR), are used to target pathogen specific genomic nucleotide sequences and amplify these biomarkers to detectable levels [4]. Although PCR was first conceived in the 1980s [5,6,7,8], it remains the most commonly used nucleic acid amplification technology and has been the primary diagnostic tool of choice during the global COVID-19 pandemic [9,10,11].
PCR is a temperature-mediated technology that mimics aspects of DNA replication by rapidly cycling high-temperature DNA denaturing phases with specific lower-temperature annealing phases. This process causes separation of the target DNA to be amplified, enabling sense and antisense, or forward and reverse, single-stranded oligonucleotide primers to complement bind at opposing ends of a short nucleotide sequence located in the biomarker target. The free 3′ hydroxyl group of each hybridised primer is targeted by a thermostable DNA polymerase leading to the addition of nucleotide subunits, generating new DNA strands. Each denaturation and annealing temperature cycle doubles the biomarker target, leading to exponential amplification that can be monitored in real-time, typically using thermocycling fluorometers in combination with hydrolysis probes or DNA-binding dyes. Hydrolysis probes are single-stranded oligonucleotides, with a 5′ fluorophore and 3′ quencher, located between PCR primers and designed with higher melting temperatures to ensure earlier target hybridisation. The 3′ quencher absorbs fluorophore fluorescence and acts as an extension blocker preventing non-specific signal generation. Extension from the flanking primers during each PCR cycle dissociates the hydrolysis probe fluorophore and quencher producing fluorescence which is relative to the amplified product, enabling both target detection and quantification [6,12]. Real-time PCR monitoring using the two-oligonucleotide system of a forward and reverse primer with nucleic acid dyes facilitates simpler assay design and lower cost compared to the three-oligonucleotide hydrolysis probe system [13]. However, the dye-binding two-oligonucleotide system is less specific and more prone to primer-dimer formation or non-target amplification, leading to false-positive results [14].
Various PCR applications or performance properties such as multiplex target detection and single-base specificity are essential for effective infectious disease diagnostics. Multiplex PCR involves the simultaneous detection of multiple targets in a single reaction, enabling reduced analysis time and reagent cost, conservation of clinical specimen, and incorporation of assay validating internal controls [15,16]. Typically, multiplex PCR is achieved using the three-oligonucleotide hydrolysis probe system with differentially coloured fluorophores and multichannel thermocycling fluorometers. The dye-binding two-oligonucleotide PCR system also enables multiplex detection; however, this approach requires post-amplification melt analysis and is more prone to assay cross-reactivity [12,17]. Single-base specificity in PCR is an important performance property as it can enable effective differentiation between closely related targets as well as the identification of specific single-nucleotide polymorphisms (SNPs). SNPs are genomic point mutations or single nucleotide differences found in at least 1% of a population. Particular SNPs can be associated with various diseases, pathogenic microorganisms, or antimicrobial resistance, and as a result are commonly targeted in molecular diagnostics. SNP variations at a particular genome location are referred to as alleles, with the most commonly found variation in a population known as the wild-type allele and alterations from this referred to as mutant alleles [18,19,20,21]. SNP detection using single-base-specific PCR has been demonstrated with both allele-biased amplification [22,23] and allele-biased signal generation methods [24,25]. Allele-biased amplification, such as allele-specific PCR, biases amplification of a particular allele by locating SNP mismatches at primer 3′-ends to inhibit polymerisation and enable differentiation between variant alleles. This approach, however, produces variable results and generally requires extensive optimisation to successfully differentiate targets [26]. Another major limitation to this method is that once a non-specific priming event of the SNP template occurs, incorporating primers into the amplicon, no further target discrimination can be achieved. Allele-biased signal generation methods, such as the three-oligonucleotide hydrolysis probe system, differentiate between unbiased allele amplification by designing probes to coordinate with a particular allele SNP. For effective SNP differentiation using this method, shorter hydrolysis probes are used, requiring the incorporation of modified bases such as locked nucleic acids (LNAs) to maintain appropriate probe melting temperature values [27,28].
This article introduces 3′ Tth endonuclease cleavage PCR (3TEC-PCR) technology, a novel two-oligonucleotide PCR system that enables real-time multiplex target detection with single-base specificity. The 3TEC-PCR method uses standard PCR conditions with a modified primer/probe and a thermostable endonuclease, Tth endonuclease IV. The modified primer/probe incorporates a 5′ fluorophore, an internal abasic site and a 3′ quencher (Figure 1). In single-stranded form, the modified primer/probe is quenched and blocked from polymerase extension by the 3′ quencher. In target-bound duplex form, the modified primer/probe abasic site is cleaved by the Tth endonuclease IV enzyme, enabling extension and fluorescence production via dissociation of the fluorophore and quencher. The presence of an SNP immediately 3′ of the abasic site causes cleavage inhibition, which facilitates the 3TEC-PCR single-base specificity. In this study, we have demonstrated 3TEC-PCR real-time detection, analytical specificity and sensitivity, SNP differentiation, and multiplex detection using bacterial meningitis pathogens Haemophilus influenzae, Neisseria meningitidis, and Streptococcus pneumoniae as model target organisms.

The H. influenzae 3TEC-PCR wild-type assay successfully detected each duplicate of the 10-fold serially diluted type strain H. influenzae DNA concentrations tested at 104, 103, 102, and 101 genome copies per reaction, and detected one of the duplicates tested at 100 genome copies (Figure 2). The resulting amplification curves produced approximate average Ct values of 23.5, 27, 30.5, and 34 for the 104, 103, 102, and 101 genome copy number concentrations, respectively, and produced a Ct value of 38 for one of the 100 genome copy duplicates. The negative control reaction performed appropriately as no fluorescence signal was observed.

The H. influenzae, N. meningitidis, and S. pneumoniae 3TEC-PCR multiplex assay accurately identified all three bacterial targets tested at 104 genome copies, in separate reactions and in one combined reaction (Figure 4). All bacterial targets were detected in appropriate corresponding fluorescence-detection channels: H. influenzae in Cy5, N. meningitidis in FAM, and S. pneumoniae in HEX, with no non-specific target detection or channel-to-channel fluorescence cross-talk observed. Each bacterial target produced the same approximate Ct value when tested separately or when tested in combination with the other two bacterial targets in the same reaction: 26 for H. influenzae, 28 for N. meningitidis, and 29 for S. pneumoniae. There was no amplification fluorescence signal observed in the negative control reaction performed in parallel, indicating no non-specific detection or unwanted interaction between the 3TEC-PCR oligonucleotide sets.

An inclusivity panel of 10 H. influenzae references strains and an exclusivity panel of 30 closely related Haemophilus reference strains, with N. meningitidis and S. pneumoniae type strains, were used to demonstrate the analytical specificity of the H. influenzae 3TEC-PCR wild-type assay. Purified genomic DNA from each of the specificity panel bacterial strains was tested at 104 genome copy concentrations (Table S1).
Replicates of serially diluted type strain H. influenzae DSM 4690 purified DNA were used to establish the analytical sensitivity of the H. influenzae 3TEC-PCR wild-type assay. Genomic DNA template concentrations of 32, 16, 8, 4, 2, and 1 genome copies were tested in replicates of 12. Probit analysis was performed on the resulting data to determine the assay limit of detection (LOD) with 95% confidence (Table S3). Negative control reactions were performed in parallel to the above specificity and sensitivity testing.

For a demonstration of 3TEC-PCR single-base specificity and SNP differentiation, the H. influenzae 3TEC-PCR wild-type assay and the H. influenzae 3TEC-PCR mutant allele assay were used. The mutant allele assay was performed as per the wild-type assay with the H. influenzae mutant allele forward primer/probe replacing the wild-type forward primer/probe. Both assays were challenged with the SNP0 and SNP1 synthetic DNA templates (Table S2) at 104 copies per reaction, with negative control reactions performed in parallel. The resulting fluorescent signal was recorded with the LightCycler 480 Instrument II using the Cy5 (646 to 662 nm) and FAM (495 to 520 nm) fluorescence-detection channels (Figure 3).

The 3TEC-PCR real-time simultaneous detection of multiple bacterial targets was exemplified using the H. influenzae, N. meningitidis, and S. pneumoniae 3TEC-PCR multiplex assay. This reaction was performed as per the H. influenzae 3TEC-PCR wild-type assay with the addition of N. meningitidis and S. pneumoniae 3TEC-PCR oligonucleotides (Table 1). Bacterial target DNA templates were each added at 1 µL volumes, with molecular-grade water used to give a final reaction volume of 20 µL. For a demonstration of single-target detection, the multiplex assay was challenged in separate reactions with H. influenzae DSM 4690, N. meningitidis NCTC 10025, and S. pneumoniae DSM 20566 purified DNA, each at a concentration of 104 genome copies per reaction. In parallel, to demonstrate simultaneous multiple target detection, the multiplex assay was challenged with all three bacterial targets in a single reaction at 104 genome copy concentrations. A negative control reaction without any bacterial template was carried out in parallel. The resulting fluorescent signal was recorded with the LightCycler 480 Instrument II using the Cy5 (646 to 662 nm), FAM (495 to 520 nm) and HEX (535 to 565 nm) fluorescence-detection channels. For correction of any possible channel-to-channel fluorescence cross-talk, a colour compensation file was generated and applied as per the LightCycler 480 Instrument II operator manual.

The authors of this manuscript declare no conflict of interest. 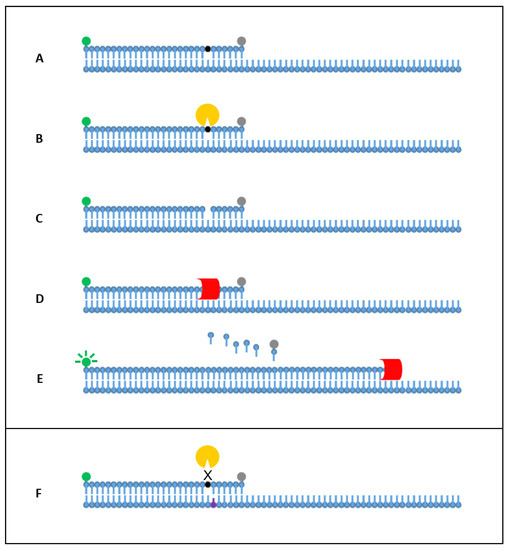 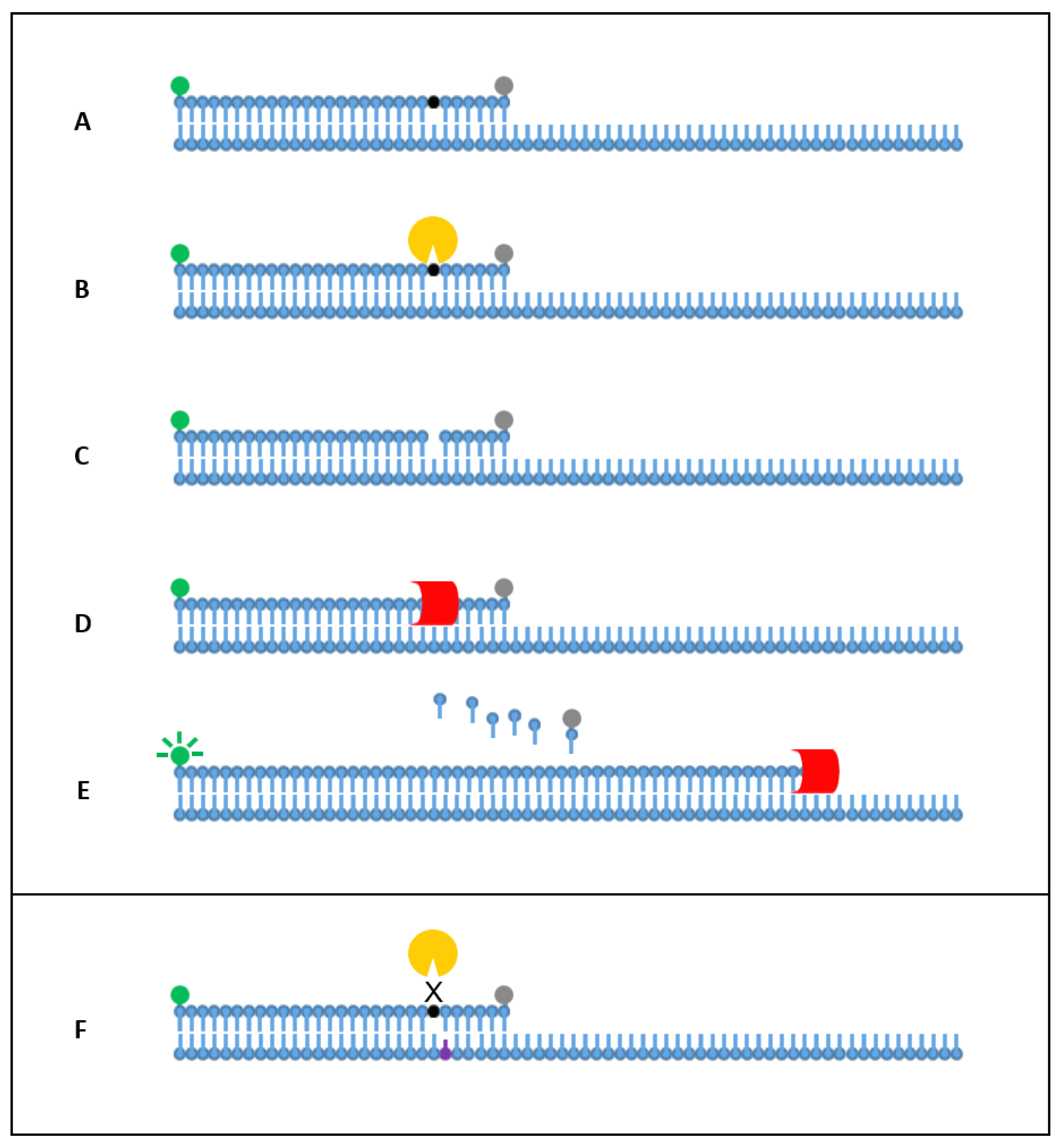 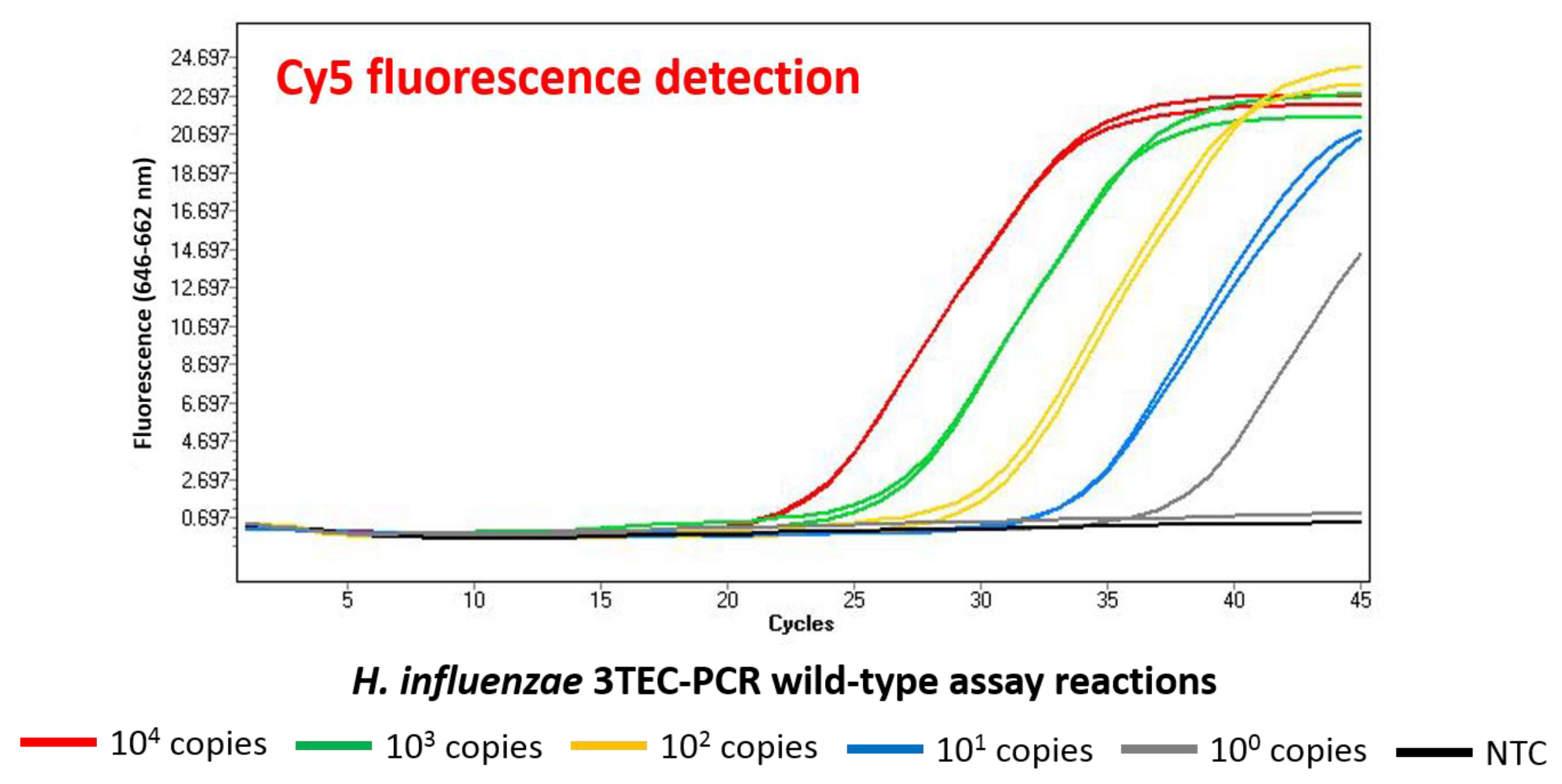 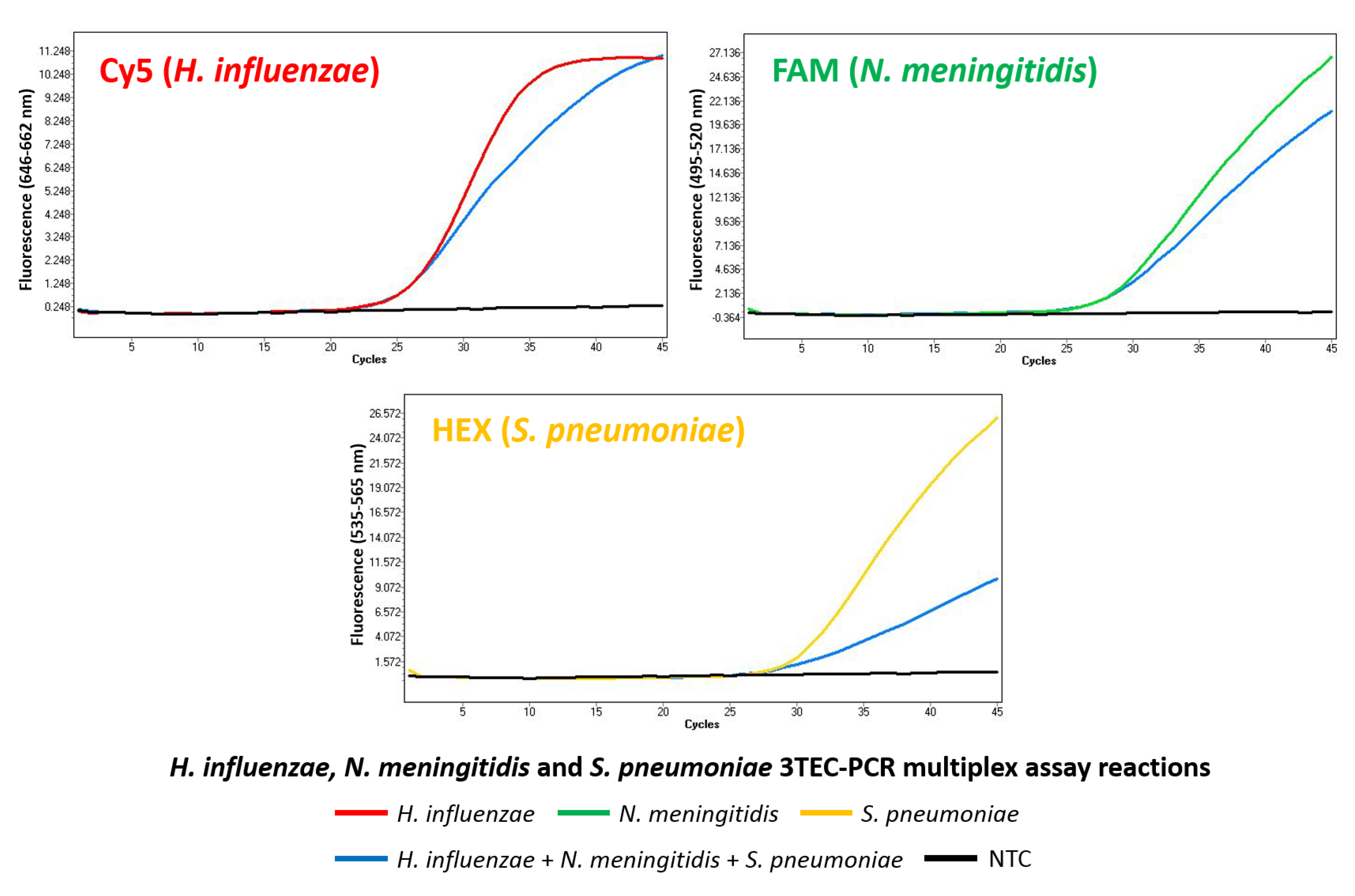