Radiation therapy is one of the main methods of treating patients with non-small cell lung cancer (NSCLC). However, the resistance of tumor cells to exposure remains the main factor that limits successful therapeutic outcome. To study the molecular/cellular mechanisms of increased resistance of NSCLC to ionizing radiation (IR) exposure, we compared A549 (p53 wild-type) and H1299 (p53-deficient) cells, the two NSCLC cell lines. Using fractionated X-ray irradiation of these cells at a total dose of 60 Gy, we obtained the survived populations and named them A549IR and H1299IR, respectively. Further characterization of these cells showed multiple alterations compared to parental NSCLC cells. The additional 2 Gy exposure led to significant changes in the kinetics of γH2AX and phosphorylated ataxia telangiectasia mutated (pATM) foci numbers in A549IR and H1299IR compared to parental NSCLC cells. Whereas A549, A549IR, and H1299 cells demonstrated clear two-component kinetics of DNA double-strand break (DSB) repair, H1299IR showed slower kinetics of γH2AX foci disappearance with the presence of around 50% of the foci 8 h post-IR. The character of H2AX phosphorylation in these cells was pATM-independent. A decrease of residual γH2AX/53BP1 foci number was observed in both A549IR and H1299IR compared to parental cells post-IR at extra doses of 2, 4, and 6 Gy. This process was accompanied with the changes in the proliferation, cell cycle, apoptosis, and the expression of ATP-binding cassette sub-family G member 2 (ABCG2, also designated as CDw338 and the breast cancer resistance protein (BCRP)) protein. Our study provides strong evidence that different DNA repair mechanisms are activated by multifraction radiotherapy (MFR), as well as single-dose IR, and that the enhanced cellular survival after MFR is reliant on both p53 and 53BP1 signaling along with non-homologous end-joining (NHEJ). Our results are of clinical significance as they can guide the choice of the most effective IR regimen by analyzing the expression status of the p53–53BP1 pathway in tumors and thereby maximize therapeutic benefits for the patients while minimizing collateral damage to normal tissue. View Full-Text
Keywords: non-small cell lung cancer; ionizing radiation; radioresistance; DNA repair; p53 non-small cell lung cancer; ionizing radiation; radioresistance; DNA repair; p53
►▼ Show Figures 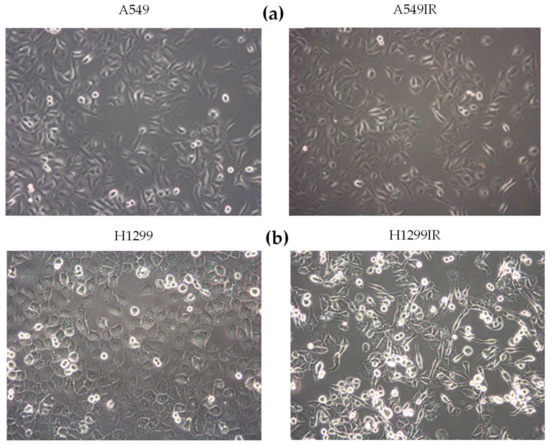