A PIANO (Proper, Insufficient, Aberrant, and NO Reprogramming) Response to the Yamanaka Factors in the Initial Stages of Human iPSC Reprogramming
Next Article in Special Issue

Functional Role of Dietary Intervention to Improve the Outcome of COVID-19: A Hypothesis of Work

The distribution of serum adiponectin in our VLCKD participants was analyzed by western blotting ting analysis (Figure 4). Three bands corresponding to HMW (≥250 kDa), MMW (180 kDa), and LMW (70 kDa) oligomers were evident in the serum from our participants; Figure 2A shows a representative blot of the different oligomers (HMW, MMW, and LMW) present in the serum of two VLCKD participants at baseline (T0) and after eight weeks of VLCKD (T1). The densitometric evaluation of the adiponectin oligomers in serum from all participants compared before and after eight weeks of nutritional intervention confirmed that HMW, MMW, and LMW oligomers increased after the dietary intervention (Figure 2B) (p < 0.05). In particular, HMW adiponectin oligomers, which are the most biologically active, were statistically increased in VLCKD participants after the period of diet intervention.

Twenty obese subjects (10 females, 10 males), aged between 20 and 60 years (mean 48 ± 10 years), were enrolled. The study took place at the Laboratory of Physiology, Department of Clinical and Experimental Medicine, University of Foggia. This study was performed in accordance with the Declaration of Helsinki and approved by the local ethics committee on 22 May 2018, n°440/DS. According to the current legislation in Italy, informed consent was signed by all participants, who were free to leave the study at any moment. Exclusion criteria were as follows: medical history positive for renal insufficiency, hyperuricemia, severe hepatic insufficiency, type 1–2 diabetes mellitus treated with insulin, atrioventricular block, heart failure, cardiovascular and cerebrovascular diseases, unbalanced hypokalemia, hypo-hyperthyroidism, chronic treatment with corticosteroid drugs, severe mental disorders, neoplasms, pregnancy, and lactation. All participants were highly motivated and none of them had any previous experience with low-carbohydrate or ketogenic diets.

As previously reported, all participants underwent a general medical examination. We recorded age, height, weight, blood pressure, and laboratory tests, at baseline and after eight weeks [46,47].
During the study, dietary adherence was measured daily, between 2:00 and 4:00 p.m., by capillary blood ketone assessment, (GD40 Delta test strips, TaiDoc Technology Co., Taiwan). Nutritional ketosis was defined as a blood ketone (b-hydroxybutyrate) level >0.5 mmol/L. Body weight was recorded at the same time of the day, to the nearest 0.1 kg (SECA 711, Hamburg, Germany) with the participants wearing light clothing, and height was recorded to the nearest 0.1 cm (SECA 213, Hamburg, Germany). Fasting (12 h) blood samples were collected at 8:00 a.m., and blood samples were centrifuged with the resultant serum stored at −80 °C until use [47].

Height, weight, BMI, and waist circumference of the 20 obese participants were recorded. Body weight was measured in a fasting state in the morning with a mechanical balance (±0.1 kg, SECA 700, Hamburg, Germany). BMI was calculated as body weight divided by height squared (kg/m2) with categories in accordance with the World Health Organization guidelines. To define participants with alterations in BMI and circumferences, the reference intervals normalized to the age of each participant were applied [47]. Body composition was estimated by DXA (Lunar Prodigy DXA, GE Healthcare, USA), via whole-body scan. VAT was quantified by subtracting subcutaneous fat from total abdominal fat, reported in grams, using the CoreScan software (GE Healthcare, Madison, WI, USA) [48].

Blood human samples were taken after obtaining the informed consent from the patients or control subjects in accordance with the tenets of the Declaration of Helsinki. The samples were collected after an overnight fast (12 h), and serum samples were collected. Serum albumin, insulin, C-reactive protein, glucose, total cholesterol, HDL and LDL cholesterol, and triglycerides were measured. Concentrations of total adiponectin in serum were measured via an enzyme-linked immunosorbent assay (ELISA) using a commercial kit (Elabscience, Houston, Texas, USA). Furthermore, we analyzed TNF-α, IL-10, and IL-6 serum levels via enzyme-linked immunosorbent assay (ELISA) using a commercial kit (BD Opt EIA for human TNF-α, IL-10, IL-6). All ELISA tests were performed in triplicate, and the protocols followed were according to the manufacturers’ instructions.

Serum samples from all participants were quantified for total proteins by the Bradford assay (Bio-Rad, Hercules, CA, USA), and 10 μg of total protein was heated in 1× Laemmli buffer at 95 °C for 10 min and loaded onto 10% SDS-PAGE gels as previously described [49]. The immunoblots were developed by ECL (Amersham Biosciences, Piscataway, NJ, USA) with the use of Kodak BioMax Light film, digitalized with a scanner (1200 dpi), and analyzed by densitometry with ImageJ software (https://imagej.nih.gov/ij/). Each sample was tested three times in duplicate.

The participants followed the VLCKD according to a commercial weight loss program (Lignaform, Therascience, 3, rue de l’Industrie, 98000 Principato di Monaco), previously reported in our published paper [47]. The characteristics of this diet are reported in Table 3.

Statistical analyses were performed using the StatView software 5.0.1.0 (SAS Institute, Cary, NC, USA). All data are presented as means ± SD. A p-value ≤0.05 was used for statistical significance. Adiponectin, VAT, and CRP serum concentrations were correlated by Pearson’s or Spearman’s rho tests, according to data distribution. A p-value < 0.05 was considered statistically significant. Multiple comparisons on Western blotting ting experiments were performed.

This research was funded by Therascience (Monaco), free of charge to the participants. The funding source had no involvement in the study design, recruitment of participants, study interventions, data collection, or interpretation of the results. 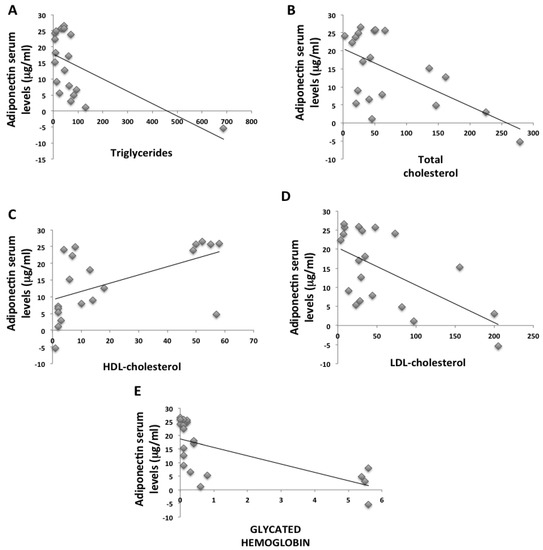 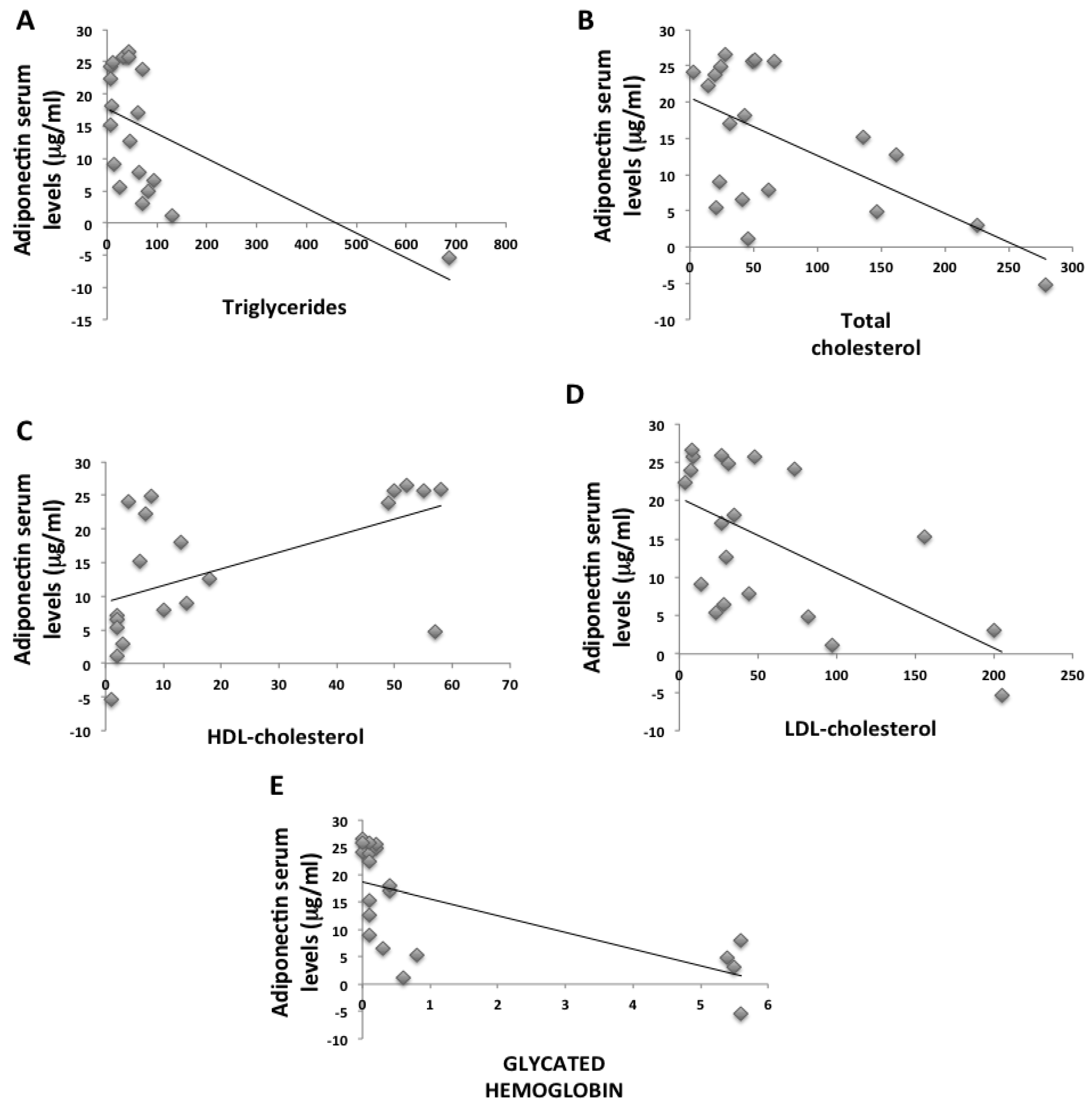 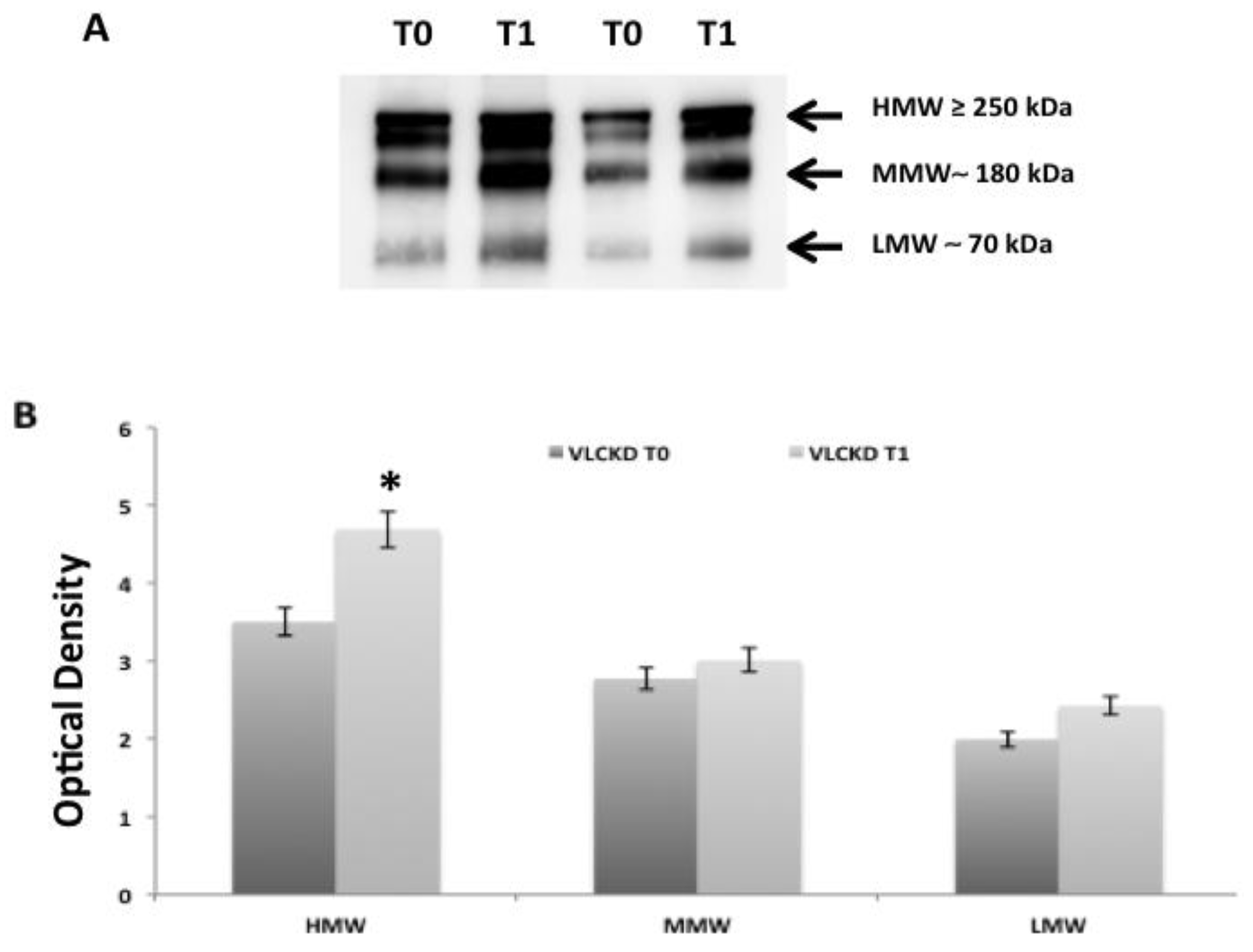 Table 3. VLCKD characteristics.
Table 3. VLCKD characteristics.
© 2020 by the authors. Licensee MDPI, Basel, Switzerland. This article is an open access article distributed under the terms and conditions of the Creative Commons Attribution (CC BY) license (http://creativecommons.org/licenses/by/4.0/).
We use cookies on our website to ensure you get the best experience. Read more about our cookies here.
Accept
We have just recently launched a new version of our website. Help us to further improve by taking part in this short 5 minute survey here. here.
Never show this again