According to the National Cancer Institute, among all types of cancer, lung cancer is the second common cancer type with the highest mortality rate in the United States [1]. It is also considered the leading cause of death in Taiwan [2]. Of the two major types, non-small-cell lung cancer (NSCLC) is the most common, which is estimated to be 80% of lung cancer, whereas another major type is called small-cell lung cancer (SCLC), which is approximated to be 20%. Furthermore, the NSCLCs are sub-divided into adenocarcinoma (30–40%), squamous cell carcinoma (30–40%), and large-cell carcinoma (<10%) [3]. Notably, lung cancer has high risk of relapse after the surgery, as many cases fail to achieve a sufficient cure following surgery [4], and 30%–55% of patients with NSCLC die of the recurrence of lung cancer, despite curative resection [5,6]. Therefore, to eliminate lung cancer, an attempt was made to combine chemo- and radiotherapy, which might decrease the risk of relapse. However, some researches showed the inadequacy of this combined therapy [7,8,9]. Hence, developing a comprehensive treatment of lung cancer is still an important issue worldwide.
Genetic alterations induce high or low transcriptional programs, which lead to cancer pathogenesis. These programs may render cancer cells to become highly dependent on regulators of gene expression. Therefore, with reference to forkhead box F1 (FOXF1), a protein implicated in cancer progression, we aimed to understand outcomes of transcriptional dependencies and whether this protein involved in transcriptional control could be an attractive target of a new generation of drugs, thereby imparting opportunities for novel therapeutic interventions in cancer.
In recent years, FOXF1 proteins were implicated in cancer progression. These proteins are highly expressed in fetal and adult lung tissues [10], and they were identified to regulate angiogenesis during embryonic development [11]. Furthermore, FOXF1 also plays a vital role in the development of pulmonary alveoli and vasculature, whereas any deletions or mutations in the FOXF1 gene are believed to cause alveolar capillary dysplasia with misalignment of pulmonary veins [12,13,14]. In a few previous studies, FOXF1 was demonstrated as a tumor suppressor [15,16], and it was found downregulated in certain types of cancers, including prostate and breast cancer tissues, when compared to normal [17,18]. In our previous study, FOXF1 was identified as a reprogramming mediator that leads to stemness, when mesenchymal stem cells (MSCs) fuse with lung cancer cell, and its restoration leads to p21-regulated growth suppression in fusion progeny [19]. This implies that FOXF1 and its downstream molecules might act as molecular targets for the development of diagnostic and therapeutic tools against lung cancer. In this study, we initially examined FOXF1 expression in lung cancer tissues and cell lines compared to those with normal tissues. Furthermore, we created a highly expressing FOXF1 lung cancer cell line (FOXF1H) through lentiviral transduction of lowly expressed FOXF1 parental cell lines (FOXF1L) and comparatively characterized their cell proliferation and migration ability. We also attempted to determine mechanistic insight into FOXF1-mediated regulation of the cell cycle via flow cytometric analysis. Later, the transformation ability of these cell lines was tested in in vitro and in vivo models.

2.1. FOXF1 is Downregulated in Lung Cancer Tissue and Cell Lines

The cell-cycle checkpoints are signal transduction pathways to track the successful completion of events in a phase of the cell cycle [26]. Therefore, using flow cytometry, we further investigated the impact of FOXF1 expression on the cell cycle. The representative cell-cycle histograms showed the population shift to the G1 phase of H441-FOXF1H and H1299-FOXF1H cell lines (Figure 3A). The bar graph and the respective table are presented with the cellular percentage of each phases, which clearly show a higher population of cells in G1 phase of highly expressing FOXF1 cell lines compared to their counterparts (Figure 3B). This indicates that FOXF1 may promote pronounced cell-cycle arrest in the G1 phase of lung cancer.

The cell cycle is known to be regulated by tumor suppressors and cellular cyclins [27]. Hence, to gain mechanistic insight into FOXF1-mediated regulation of the cell cycle, we determined the protein expression of cell-cycle-related proteins, including p21, cyclin A2, cyclin B1, and cyclin E2. The Western blot demonstrated upregulated p21 level, a well-known promoter of cell-cycle arrest, in the H441-FOXF1H and H1299-FOXF1H cell lines. On the contrary, the levels of cyclin A2, B1, and E2 in these cell lines were inhibited (Figure 4A). The above-mentioned data were further confirmed through their quantification (Figure 4B).

The ability of anchorage-independent cell growth and the ability of transformation are the identified signatures of tumors with metastatic potential [28]. Therefore, we also evaluated the other cancerous characteristics of highly expressing FOXF1 lung cancer cell lines, H441-FOXF1H and H1299-FOXF1H. Specifically, we conducted the soft agar assay to observe the effect on ability of anchorage-independent growth and transformation of these cell lines, which showed significantly reduced colony number (Figure 5A,B), implying inhibited transformation ability.

To evaluate the effect of high expression of FOXF1 on lung cancer cell metastatic potential, we performed the wound healing assay, which shows the migration ability of cell lines. Here, 24 h after wound creation, an inhibited migration ability was observed in H441-FOXF1H (Figure 6A) and H1299-FOXF1H (Figure 6B), which was also confirmed through quantification, compared to their respective controls.

In order to determine the in vivo effect of FOXF1 on the tumorigenic ability of lung cancer cells, the highly expressing FOXF1 cells (H441-FOXF1H and H1299-FOXF1H) were subcutaneously injected into non-obese diabetic/severe combined immunodeficiency (NOD-SCID) mice to observe the size of tumor formed. The results showed a significantly reduced tumor volume in the H441-FOXF1H and H1299-FOXF1H group compared to control (H441-FOXF1L and H1299-FOXF1L) (Figure 7A,B), indicating that FOXF1 could inhibit tumorigenesis.

All the animal studies were approved by The Institutional Animal Care and Use Committee (IUCAC) of Taipei Medical University (Approval no. LAC-2016-0526; 1 August 2017). Six-week-old non-obese diabetic/severe combined immunodeficiency (NOD/SCID) mice were purchased from the BioLAS Co., Taiwan. The mice were housed under pathogen-free conditions and fed autoclaved food and water.

Control and highly expressing FOXF1 cell lines of H1299 and H441 were seeded at 5 × 104 cells per well in a six-well plate and incubated for one, three, and five days. Cells were stained with 0.4% trypan blue (Invitrogen, Eugene, OR, USA) and counted with a hemocytometer after incubating for the indicated time course.

For cell-cycle analysis by flow cytometry, the cells were trypsinized and washed with PBS and fixed with 75% ethanol. Then, 500 μL of RNase A (0.2 mg/mL, Sigma-Aldrich, 10109142001) and 500 μL of propidium iodide (0.02 mg/mL, Sigma-Aldrich, 11348639001) were added to the cell suspensions, and the mixtures were incubated for 30 min in the dark. A flow cytometer (BD FACS Calibur) was used for cell-cycle analysis, and 10,000 events for each sample were recorded. Data acquisition and analysis were done using BD FACSDiva software version 4.1 (BD Biosciences, San Jose, CA, USA), and the percentages of cells present in the G1, S, and G2/M (mitosis) phases were determined.

Firstly, 1 mL of 0.5% agar in complete growth medium was added to each well of a six-well plate as a base agar. The top agar was prepared using 1 mL of 0.3% agar in complete growth medium containing 3 × 105 cells of H441-FOXF1L and H441-FOXF1H, and 1 × 104 cells of H1299-FOXF1L and H1299-FOXF1H, and it was overlaid on the base agar. Growth medium (2 mL) was added on top of the second layer and changed twice a week. After incubation for three weeks, the colonies formed were stained with 0.005% crystal violet in methanol (Fisher Scientific, Hampton, NH, USA) and then enumerated.

To evaluate the wound healing, 1.5 × 105 cells of H441-FOXF1L and H441-FOXF1H, and 1 × 105 cells of H1299-FOXF1L and H1299-FOXF1H cells were seeded in a 24-well plate to obtain a confluent monolayer. The wounds were created through scraping the monolayer in a straight line with a 200-μL pipette tip, and debris was removed by washing with sterile PBS. Thereafter, the migration ability of these cells was assessed through measuring the recovered area of wound by cell migration.

To examine the tumorigenicity in vivo, 5 × 105 cells of H441-FOXF1L and H441-FOXF1H, and 1 × 106 cells of H1299-FOXF1L and H1299-FOXF1H were subcutaneously injected into six-week-old non-obese diabetic/severe combined immunodeficiency (NOD/SCID) mice (n = 5). The tumor size was measured with a digital caliper twice a week. The tumor size was calculated using the following formula:

Based on our results, it could be inferred that highly expressing FOXF1 inhibits non-small-cell lung cancer growth via activating tumor suppressor p21, leading to cell-cycle arrest at the G1 phase. Thus, FOXF1 could be a potential therapeutic candidate for lung cancer. 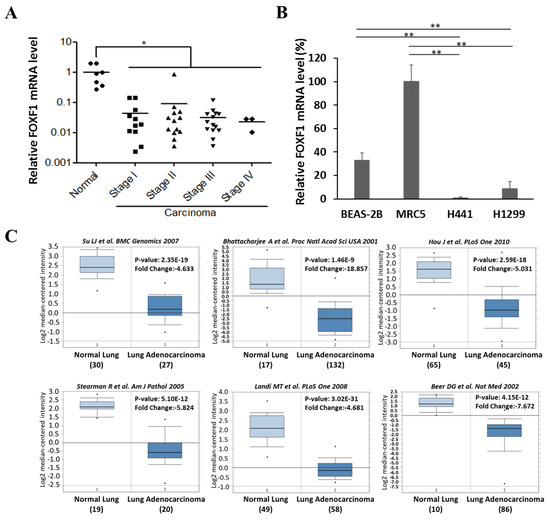 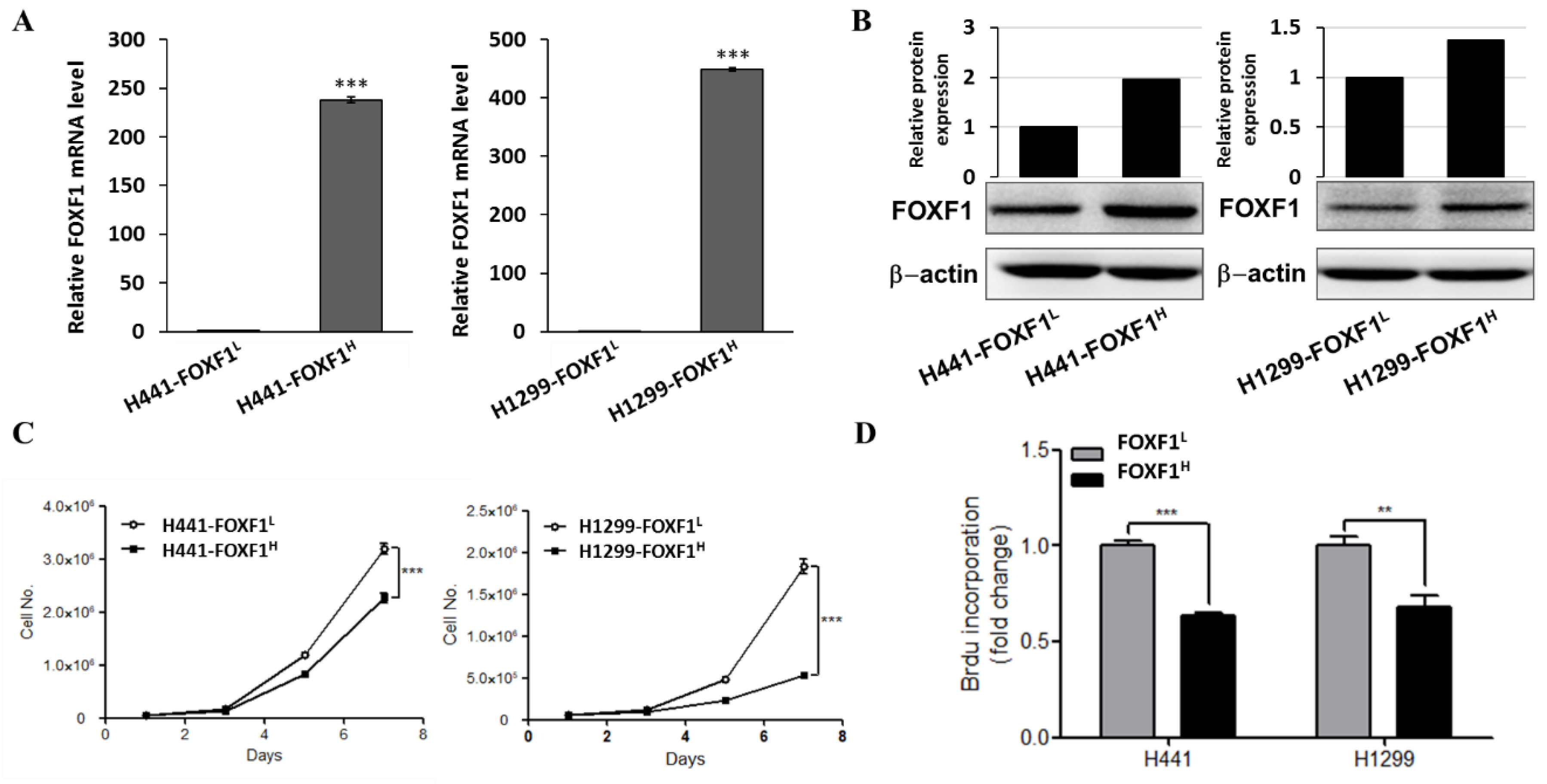 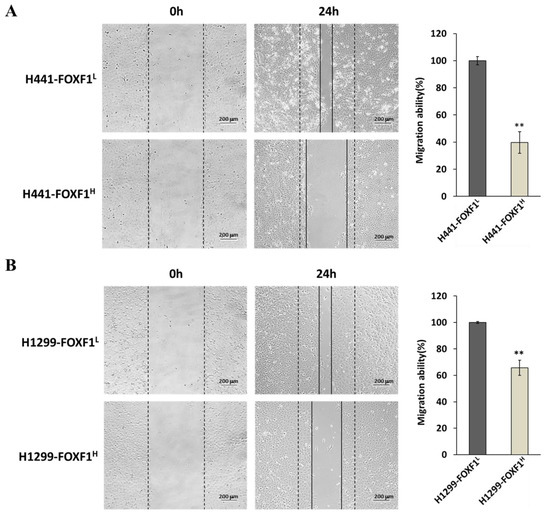 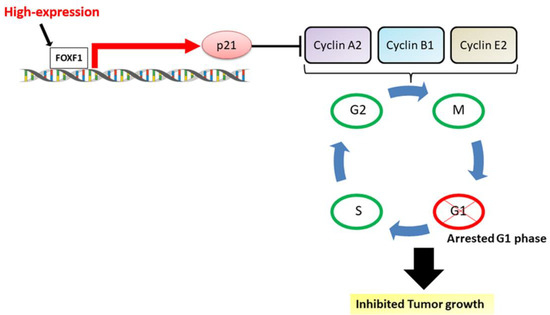