Induction of CEMIP in Chondrocytes by Inflammatory Cytokines: Underlying Mechanisms and Potential Involvement in Osteoarthritis
Previous Article in Journal

The Dark Side of Orchid Symbiosis: Can Tulasnella calospora Decompose Host Tissues?

The disruption of the cellular pathways of protein biosynthesis through the mechanism of RNA interference has been recognized as a tool of great diagnostic and therapeutic significance. However, in order to fully exploit the potential of this phenomenon, efficient and safe carriers capable of overcoming extra- and intracellular barriers and delivering siRNA to the target cells are needed. Recently, attention has focused on the possibility of the application of multifunctional nanoparticles, dendrimers, as potential delivery devices for siRNA. The aim of the present work was to evaluate the formation of dendriplexes using novel poly(lysine) dendrimers (containing lysine and arginine or histidine residues in their structure), and to verify the hypothesis that the use of these polymers may allow an efficient method of siRNA transfer into the cells in vitro to be obtained. The fluorescence polarization studies, as well as zeta potential and hydrodynamic diameter measurements were used to characterize the dendrimer:siRNA complexes. The cytotoxicity of dendrimers and dendriplexes was evaluated with the resazurin-based assay. Using the flow cytometry technique, the efficiency of siRNA transport to the myeloid cells was determined. This approach allowed us to determine the properties and optimal molar ratios of dendrimer:siRNA complexes, as well as to demonstrate that poly(lysine) dendrimers may serve as efficient carriers of genetic material, being much more effective than the commercially available transfection agent Lipofectamine 2000. This outcome provides the basis for further research on the application of poly(lysine) dendrimers as carriers for nucleic acids in the field of gene therapy.
Keywords: poly(lysine) dendrimers; siRNA; gene delivery; gene therapy; transfection poly(lysine) dendrimers; siRNA; gene delivery; gene therapy; transfection

RNA interference (RNAi) is a biological process in which RNA molecules induce specific inhibition of target gene expression. Its discovery provoked great enthusiasm in the scientific community, and subsequent studies on RNAi resulted in the transition from experimental technology to a powerful therapeutic tool. In 2010, the first case of systemic targeted delivery of short interfering RNA (siRNA) was reported, which gave a solid foundation for the clinical use of this type of genetic material [1]. In recent years, siRNA has become the basis for drug development due to the high level of specificity, limited side effects, and the ease of synthesis of therapeutic molecules [2].
However, before siRNA molecules reach their site of action in the cell cytoplasm, they have to conquer several obstacles, the number of which depends largely on the way of administration, the target tissue, as well as the physicochemical properties of the siRNA itself. The latter involve low stability, negative charge, and high structural stiffness, hampering the transport in body fluids, across cellular membranes, and between intracellular compartments [3]. What is more, siRNA upon entering the bloodstream easily undergoes enzymatic degradation by nucleases or rapid renal clearance [4].
In order to overcome the barriers limiting the transport of genetic material and exploit the therapeutic potential offered by the RNAi mechanism, effective delivery systems for siRNA molecules to their site of action are necessary. These systems, in addition to specific transport and transfection efficiency, should be able to protect siRNA against degradation by nucleolytic enzymes, prolong its blood circulation time, and release genetic material intracellularly, making it easily accessible for RNAi machinery, thus enabling effective silencing of the target gene [5].
In general, the carriers used to introduce nucleic acids into the cells can be divided into viral and non-viral systems. Vectors using genetically modified viruses are capable RNA delivery devices, offering, among others, long-term silencing of gene expression even after a single administration, efficient transfection, or expression of multiple copies of siRNA molecules. However, expensive production and side effects associated with random integration into the host genome (which can lead to the damage of important genes or activation of oncogenes), significant immunogenicity, and the possibility of the virus returning to its wild pathogenic type may limit the use of this group of carriers. Therefore, efforts have been made to obtain synthetic non-viral siRNA carriers, useful for both in vitro and in vivo applications [6,7].
Currently, the most commonly used non-viral siRNA carrier systems are based on nanomaterials. For this purpose, natural and synthetic cationic polymers are often applied [8], including highly branched dendrimers of a well-defined structure. These compounds enable electrostatic interactions with negatively charged siRNA molecules, providing the formation of stable complexes (dendriplexes) that are capable of intracellular delivery of nucleic acids and their protection against the activity of nucleases. What is more, surface groups of dendrimers may be subjected to modifications by functional moieties targeting them to specific locations. Numerous experiments have shown that dendrimers can be successfully used as carriers of various types of genetic material, including plasmids, single strands of DNA, oligonucleotides, and finally RNA molecules, ensuring their improved stability and prolonged blood half-life [9,10].
Most studies on the potential use of dendrimers as carriers for siRNA concern poly(amidoamine) (PAMAM), poly(propyleneimine) (PPI), and poly(lysine) dendrimers (PLL) belonging to the group of peptide dendrimers [10]. The latter are branched polymeric structures in which both the core and dendrons are composed mainly of amino acids connected by peptide bonds [11]. Peptide dendrimers are most often based on lysine, an amino acid that enables the generation of several branching points [12]. PLL dendrimers, due to their flexible structure and protein-like characteristics, such as good biocompatibility and water solubility, as well as high resistance to proteolytic digestion could be used in several biomedical applications. Their properties have been studied over the last few years both experimentally [13,14,15] and in computer simulation [16,17,18,19,20,21]. In particular, they have aroused the interest of several research teams aiming at their use as carriers of nucleic acids [22,23,24,25].
The primary goal of this study was to investigate the formation of complexes of three types of PLL dendrimers (containing additional lysine, arginine, or histidine residues within their structure) with siRNA molecules, to assess the cytotoxicity of dendrimers themselves and the obtained dendriplexes, and finally to evaluate the efficacy of transfection in in vitro-cultured myeloid cell lines.

Phosphate-buffered saline (PBS, 10 mM, pH 7.4) solutions containing control siRNA with a scrambled sequence, labeled with fluorescein (FITC) (sc-36869, Santa Cruz Biotechnology, Inc., Heidelberg, Germany) at constant concentration (0.1 μM), were prepared, and their fluorescence was measured. The siRNA-FITC solutions were subsequently titrated with solutions of the tested dendrimers (D3K2, D3R2, or D3H2) at concentrations ranging from 0.002 to 5 μM (in order to achieve dendrimer:siRNA molar ratios ranging from 1:50 to 50:1). The dendrimer:siRNA mixtures were incubated at room temperature for 10 min to ensure the formation of complexes, and then fluorescence anisotropy was measured on a Perkin-Elmer LS-55 spectrofluorometer in a 1-cm path length quartz cuvettes. The excitation and emission wavelengths were 485 and 520 nm, and the excitation and emission slit widths were set to 7 and 5 nm, respectively. The cuvette holder was temperature controlled (25 °C).

The dendriplexes of previously established optimal dendrimer:siRNA molar ratios were prepared by mixing PBS solutions (for cytotoxicity studies) or Opti-MEM medium (Gibco, Thermo Fisher Scientific, Waltham, MA, USA) solutions (for transfection assays) of siRNA-FITC (0.05 μM) and D3K2 (1 μM), D3R2 (1 μM), or D3H2 (1.5 μM) macromolecules. The mixtures were stirred for 10 min at room temperature to ensure the formation of complexes. The obtained dendriplexes were used in subsequent experiments. The control complex of siRNA-FITC (0.05 μM) with Lipofectamine 2000 (Thermo Fisher Scientific, Waltham, MA, USA) was prepared according to the manufacturer’s protocol.

To estimate the cytotoxicity of dendrimers and dendriplexes, the resazurin assay was performed [48]. Cells were seeded into 96-well black plates at a density of 1.5 × 104 cells per well, and treated with increasing concentrations of D3K2, D3R2, and D3H2 for 24 and 72 h at 37 °C in an atmosphere of 5% CO2. Following the incubation, resazurin was added to the culture medium to a final concentration of 12.5 μg/mL and the plates were incubated at 37 °C in darkness to allow the conversion of resazurin to resorufin. The fluorescence of the metabolized resazurin was measured after 2 h at 530 nm excitation and 590 nm emission using the PowerWave HT Microplate Spectrophotometer (BioTek, Winooski, VT, USA). The cytotoxicity of dendriplexes and Lipofectamine 2000:siRNA control complex was evaluated in an analogous manner.

Cells were seeded into 12-well plates at a density of 1.5 × 105 cells per well, and treated with dendriplexes and Lipofectamine 2000:siRNA control complex for 24, 48, and 72 h at 37 °C in an atmosphere of 5% CO2. Following the incubation, the cells were washed with PBS, suspended in fresh medium, and transferred to flow cytometry tubes. The fluorescence was measured using a Becton Dickinson LSR II flow cytometer (BD Biosciences, San Jose, CA, USA). The green fluorescence at 485 nm excitation and 520 nm emission was measured, and the number of FITC-positive cells was expressed as a percentage of the total number of cells in the sample.

For statistical analysis, one-way ANOVA followed by post-hoc Tukey’s test was used. In all tests, p values < 0.05 were considered to be statistically significant.

The performed in vitro tests allowed demonstration of the differences in the cytotoxicity of the tested PLL dendrimers, as well as the high biocompatibility of dendriplexes formed by this type of polymer. Most importantly, a very high level of cellular uptake of dendrimer:siRNA complexes was shown, exceeding 90% regardless of the dendrimer structure. These studies constitute the first stage of evaluation of the possibility of the application of the studied dendrimers as carriers for siRNA and will be continued in a wider scope. Only after demonstrating that the transported nucleic acid effectively inhibits expression of the target gene will it be possible to state that PLL dendrimers are an effective method of cell transfection, and may in the future become the basis of modern gene therapy. Additionally, considering the differences in the physicochemical properties of dendriplexes formed by various types of PLL dendrimers, it is reasonable to continue the studies in the field of their characterization, in order to elucidate the role of different amino acids in the structure of the dendrimer in the interactions with siRNA.

This work is based upon work from COST Action “Nano2Clinic. Cancer Nanomedicine—from the bench to the bedside” CA17140 supported by COST (European Cooperation in Science and Technology). I. M. Neelov, I. I. Tarasenko and V. V. Bezrodnyi are grateful to RSF grant 19-13-00087. 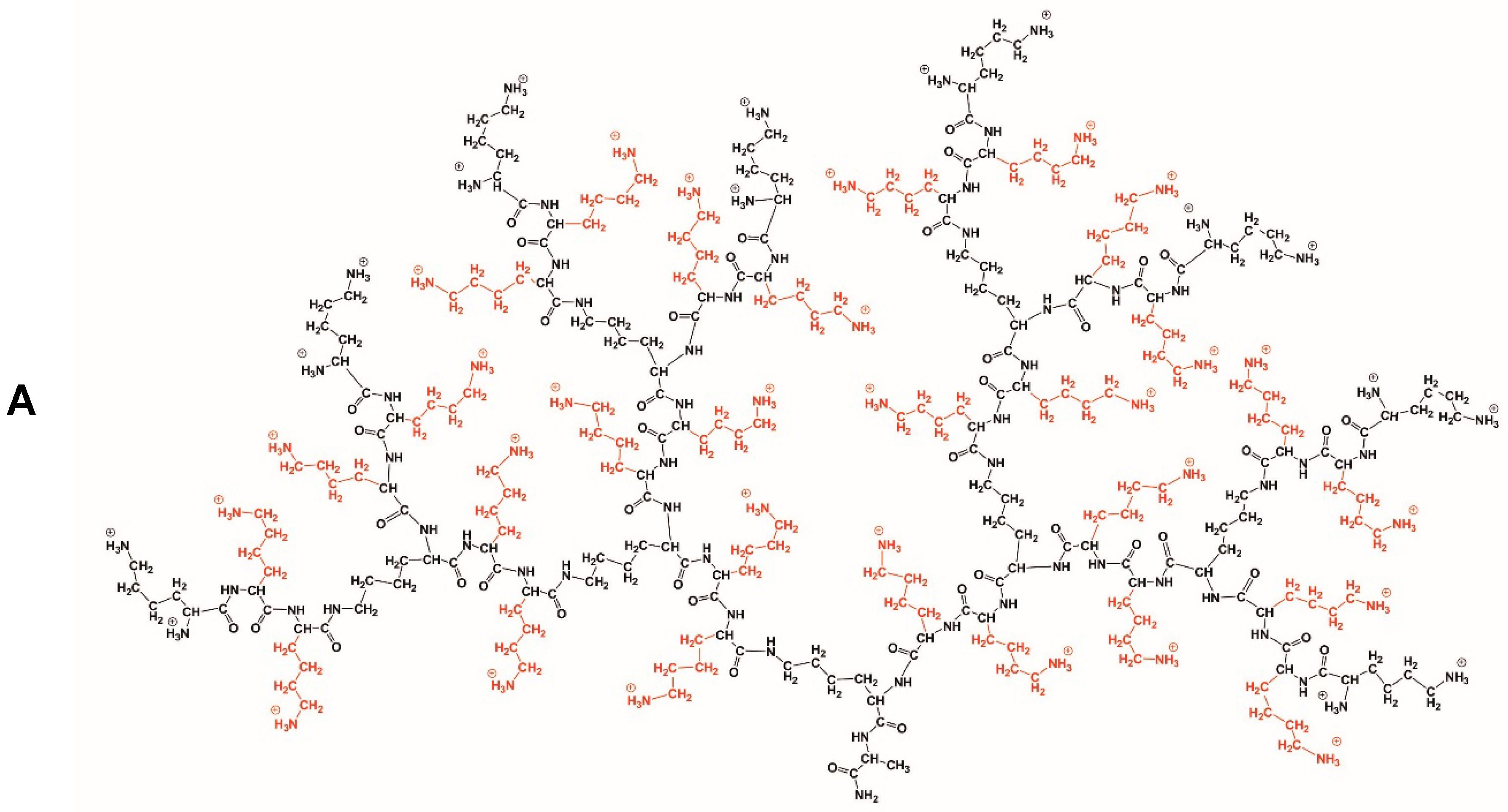 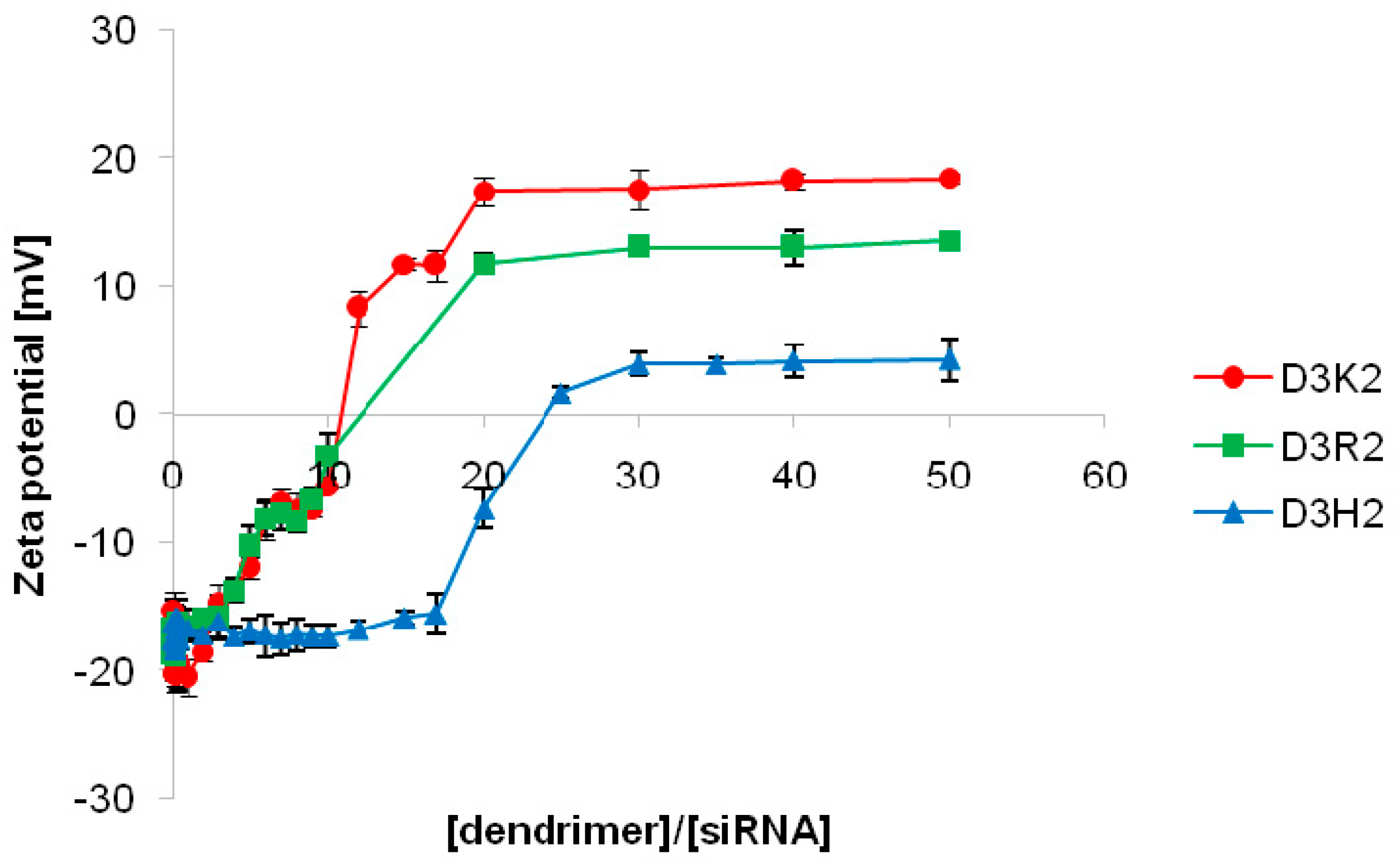