Role of kif2c, A Gene Related to ALL Relapse, in Embryonic Hematopoiesis in Zebrafish
Next Article in Special Issue

The Hedgehog (HH)–GLI pathway plays an important role in cell dedifferentiation and is therefore pivotally involved in the malignant transformation of cancer cells. GANT61, a selective inhibitor of GLI1 and GLI2, was reported as a promising treatment for cancer in various tissues; however, the biological impact of GANT61 in hepatocellular carcinoma (HCC), especially in undifferentiated HCC cells, remains unclear. In this study, we investigated the antitumor effect of GANT61 using two undifferentiated hepatoma cell lines: HLE and HLF. Quantitative PCR and RT-PCR analyses revealed that these cells express GLI transcripts, showing mesenchymal phenotypes characterized by the loss of epithelial and hepatic markers and specific expression of epithelial–mesenchymal transition (EMT)-related genes. GANT61 significantly reduced the proliferation and cell viability after drug treatment using 5-FU and Mitomycin C. We showed that GLI transcript levels were down-regulated by the MEK inhibitor U0126 and the Raf inhibitor sorafenib, suggesting that non-canonical signaling including the Ras–Raf–MEK–ERK pathway is involved. Sphere formation and migration were significantly decreased by GANT61 treatment, and it is suggested that the underlying molecular mechanisms are the down-regulation of stemness-related genes (Oct4, Bmi1, CD44, and ALDH) and the EMT-related gene Snail1. The data presented here showed that direct inhibition of GLI might be beneficial for the treatment of dedifferentiated HCC. View Full-Text
Keywords: GANT61; non-canonical Hedgehog-GLI signaling; hepatocellular carcinoma GANT61; non-canonical Hedgehog-GLI signaling; hepatocellular carcinoma
►▼ Show Figures 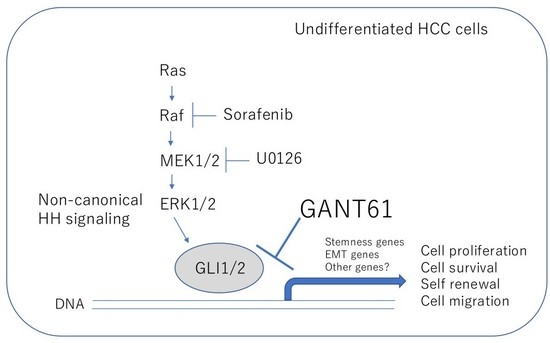