Preparing for the KIL: Receptor Analysis of Pseudomonas syringae pv. porri Phages and Their Impact on Bacterial Virulence

The phAPEC6 genome encodes 551 predicted gene products, with the vast majority (83%) of unknown function. Of these, 62 have been identified as virion-associated proteins by mass spectrometry (ESI-MS/MS), including the major capsid protein (Gp225; present in 1620 copies), which shows a HK97 capsid protein-based fold. Cryo-electron microscopy experiments showed that the 350-kbp DNA molecule of Escherichia coli virus phAPEC6 is packaged in at least 15 concentric layers in the phage capsid. A capsid inner body rod is also present, measuring about 91 nm by 18 nm and oriented along the portal axis. In the phAPEC6 contractile tail, 25 hexameric stacked rings can be distinguished, built of the identified tail sheath protein (Gp277). Cryo-EM reconstruction reveals the base of the unique hairy fibers observed during an initial transmission electron microscopy (TEM) analysis. These very unusual filaments are ordered at three annular positions along the contractile sheath, as well as around the capsid, and may be involved in host interaction. View Full-Text
Keywords: cryo-EM; jumbo phage; HK97-fold cryo-EM; jumbo phage; HK97-fold
►▼ Show Figures 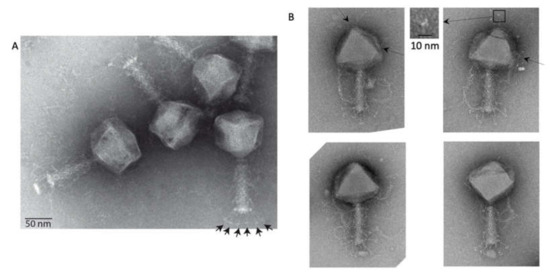