Iron is indispensable for cell metabolism of both normal and cancer cells. In the latter, several disruptions of its metabolism occur at the steps of tumor initiation, progression and metastasis. Noticeably, cancer cells require a large amount of iron, and exhibit a strong dependence on it for their proliferation. Numerous iron metabolism-related proteins and signaling pathways are altered by iron in malignancies, displaying the pivotal role of iron in cancer. Iron homeostasis is regulated at several levels, from absorption by enterocytes to recycling by macrophages and storage in hepatocytes. Mutations in HFE gene alter iron homeostasis leading to hereditary hemochromatosis and to an increased cancer risk because the accumulation of iron induces oxidative DNA damage and free radical activity. Additionally, the iron capability to modulate immune responses is pivotal in cancer progression. Macrophages show an iron release phenotype and potentially deliver iron to cancer cells, resulting in tumor promotion. Overall, alterations in iron metabolism are among the metabolic and immunological hallmarks of cancer, and further studies are required to dissect how perturbations of this element relate to tumor development and progression. View Full-Text
Keywords: iron; HFE (gene); oxidative stress; macrophages iron; HFE (gene); oxidative stress; macrophages
►▼ Show Figures 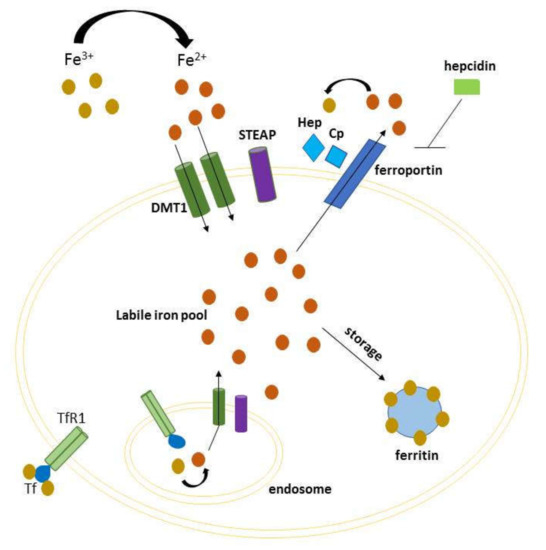