Simple Trans-Platinum Complex Bearing 3-Aminoflavone Ligand Could Be a Useful Drug: Structure-Activity Relationship of Platinum Complex in Comparison with Cisplatin
Next Article in Special Issue

Nitrogen deficiency usually occurs along with aluminum toxicity in acidic soil, which is one of the major constraints for wheat production worldwide. In order to compare adaptive processes to N deficiency with different Al-tolerant wheat cultivars, we chose Atlas 66 and Scout 66 to comprehensively analyze the physiological responses to N deficiency, coupled with label-free mass spectrometry-based proteomics analysis. Results showed that both cultivars were comparable in most physiological indexes under N deficient conditions. However, the chlorophyll content in Scout 66 was higher than that of Atlas 66 under N deficiency. Further proteomic analysis identified 5592 and 5496 proteins in the leaves of Atlas 66 and Scout 66, respectively, of which 658 and 734 proteins were shown to significantly change in abundance upon N deficiency, respectively. The majority of the differentially expressed proteins were involved in cellular N compound metabolic process, photosynthesis, etc. Moreover, tetrapyrrole synthesis and sulfate assimilation were particularly enriched in Scout 66. Our findings provide evidence towards a better understanding of genotype-dependent responses under N deficiency which could help us to develop N efficient cultivars to various soil types. View Full-Text
Keywords: wheat; nitrogen starvation; leaf chlorophyll; genes; proteome wheat; nitrogen starvation; leaf chlorophyll; genes; proteome
►▼ Show Figures 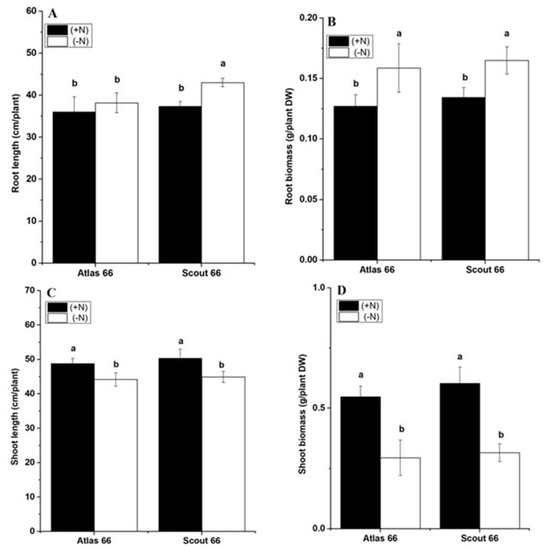