Resveratrol in Cancer Patients: From Bench to Bedside
Previous Article in Journal

Due to its health benefits, resveratrol (RE) is one of the most researched natural polyphenols. Resveratrol’s health benefits were first highlighted in the early 1990s in the French paradox study, which opened extensive research activity into this compound. Ever since, several pharmacological activities including antioxidant, anti-aging, anti-inflammatory, anti-cancerous, anti-diabetic, cardioprotective, and neuroprotective properties, were attributed to RE. However, results from the available human clinical trials were controversial concerning the protective effects of RE against diseases and their sequelae. The reason for these conflicting findings is varied but differences in the characteristics of the enrolled patients, RE doses used, and duration of RE supplementation were proposed, at least in part, as possible causes. In particular, the optimal RE dosage capable of maximizing its health benefits without raising toxicity issues remains an area of extensive research. In this context, while there is a consistent body of literature on the protective effects of RE against diseases, there are relatively few reports investigating its possible toxicity. Indeed, toxicity and adverse effects were reported following consumption of RE; therefore, extensive future studies on the long-term effects, as well as the in vivo adverse effects, of RE supplementation in humans are needed. Furthermore, data on the interactions of RE when combined with other therapies are still lacking, as well as results related to its absorption and bioavailability in the human body. In this review, we collect and summarize the available literature about RE toxicity and side effects. In this process, we analyze in vitro and in vivo studies that have addressed this stilbenoid. These studies suggest that RE still has an unexplored side. Finally, we discuss the new delivery methods that are being employed to overcome the low bioavailability of RE. View Full-Text
Keywords: resveratrol; biphasic; anticancer; reactive oxygen species (ROS); oxidative DNA damage; antioxidant effects; pro-oxidant effects resveratrol; biphasic; anticancer; reactive oxygen species (ROS); oxidative DNA damage; antioxidant effects; pro-oxidant effects
►▼ Show Figures 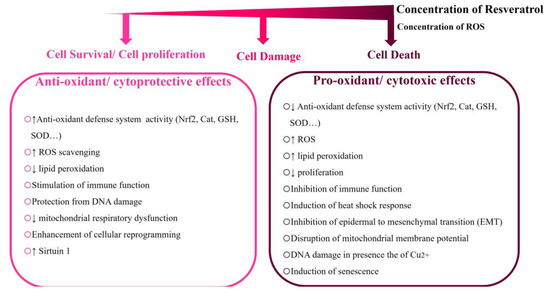