The use of high-dose Ionizing Radiation (IR) is currently one of the most common modalities in treatment of many types of cancer. The objective of this work was to investigate the effects of high-dose ionizing radiation on healthy human tissue, utilizing quantitative analysis of gene expression. To this end, publicly available transcriptomics datasets from human samples irradiated with a high dose of radiation and non-irradiated (control) ones were selected, and gene expression was determined using RNA-Seq data analysis. Raw data from these studies were subjected to quality control and trimming. Mapping of RNA-Seq reads was performed by the partial selective alignment method, and differential gene expression analysis was conducted. Subsequently, a meta-analysis was performed to select differentially expressed genes across datasets. Based on the differentially expressed genes discovered by meta-analysis, we constructed a protein-to-protein interaction network, and we identified biological pathways and processes related to high-dose IR effects. Our findings suggest that cell cycle arrest is activated, supported by our top down-regulated genes associated with cell cycle activation. DNA repair genes are down-regulated in their majority. However, several genes implicated in the nucleotide excision repair pathway are upregulated. Nevertheless, apoptotic mechanisms seem to be activated probably due to severe high-dose-induced complex DNA damage. The significant upregulation of CDKN1A, as a downstream gene of TP53, further validates programmed cell death. Finally, down-regulation of TIMELESS, signifies a correlation between IR response and circadian rhythm. Nonetheless, high-dose IR exposure effects regarding normal tissue (radiation toxicity) and its possible long-term outcomes should be studied to a greater extend. View Full-Text
Keywords: high-dose ionizing radiation; RNA-Seq; differential gene expression; DNA damage response high-dose ionizing radiation; RNA-Seq; differential gene expression; DNA damage response
►▼ Show Figures 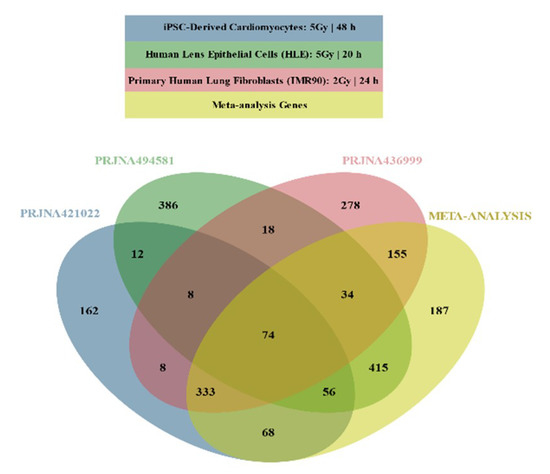