Islet dysfunction mediated by oxidative and mitochondrial stress contributes to the development of type 1 and 2 diabetes. Acetate and butyrate, produced by gut microbiota via fermentation, have been shown to protect against oxidative and mitochondrial stress in many cell types, but their effect on pancreatic β-cell metabolism has not been studied. Here, human islets and the mouse insulinoma cell line MIN6 were pre-incubated with 1, 2, and 4 mM of acetate or butyrate with and without exposure to the apoptosis inducer and metabolic stressor streptozotocin (STZ). Both short-chain fatty acids (SCFAs) enhanced the viability of islets and β-cells, but the beneficial effects were more pronounced in the presence of STZ. Both SCFAs prevented STZ-induced cell apoptosis, viability reduction, mitochondrial dysfunction, and the overproduction of reactive oxygen species (ROS) and nitric oxide (NO) at a concentration of 1 mM but not at higher concentrations. These rescue effects of SCFAs were accompanied by preventing reduction of the mitochondrial fusion genes MFN, MFN2, and OPA1. In addition, elevation of the fission genes DRP1 and FIS1 during STZ exposure was prevented. Acetate showed more efficiency in enhancing metabolism and inhibiting ROS, while butyrate had less effect but was stronger in inhibiting the SCFA receptor GPR41 and NO generation. Our data suggest that SCFAs play an essential role in supporting β-cell metabolism and promoting survival under stressful conditions. It therewith provides a novel mechanism by which enhanced dietary fiber intake contributes to the reduction of Western diseases such as diabetes. View Full-Text
Keywords: acetate; butyrate; pancreatic β-cells; apoptosis; mitochondrial dynamics; oxygen consumption rate acetate; butyrate; pancreatic β-cells; apoptosis; mitochondrial dynamics; oxygen consumption rate
►▼ Show Figures 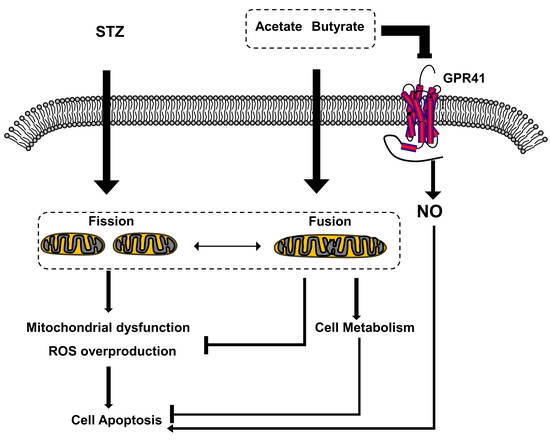