Kuruma prawn, Marsupenaeus japonicus, has the third largest annual yield among shrimp species with vital economic significance in China. White spot syndrome virus (WSSV) is a great threat to the global shrimp farming industry and results in high mortality. Pellino, a highly conserved E3 ubiquitin ligase, has been found to be an important modulator of the Toll-like receptor (TLR) signaling pathways that participate in the innate immune response and ubiquitination. In the present study, the Pellino gene from Marsupenaeus japonicus was identified. A qRT-PCR assay showed the presence of MjPellino in all the tested tissues and revealed that the transcript level of this gene was significantly upregulated in both the gills and hemocytes after challenge with WSSV and Vibrio parahaemolyticus. The function of MjPellino was further verified at the protein level. The results of the three-dimensional modeling and protein–protein docking analyses and a GST pull-down assay revealed that the MjPellino protein was able to bind to the WSSV envelope protein VP26. In addition, the knockdown of MjPellino in vivo significantly decreased the expression of MjAMPs. These results suggest that MjPellino might play an important role in the immune response of kuruma prawn. View Full-Text
Keywords: MjPellino; WSSV; Vibrio parahaemolyticus; VP26; protein-protein docking; immune response; Marsupenaeus japonicus MjPellino; WSSV; Vibrio parahaemolyticus; VP26; protein-protein docking; immune response; Marsupenaeus japonicus
►▼ Show Figures 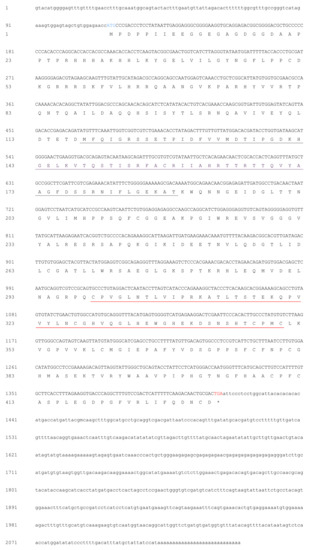