TmAtg6 Plays an Important Role in Anti-Microbial Defense Against Listeria monocytogenes in the Mealworm, Tenebrio molitor

Ribosomal proteins (RPs) are indispensable in ribosome biogenesis and protein synthesis, and play a crucial role in diverse developmental processes. In the present study, we carried out a comprehensive analysis of RPs in chordates and examined the expression profiles of the complete set of 92 cytoplasmic RP genes in Nile tilapia. The RP genes were randomly distributed throughout the tilapia genome. Phylogenetic and syntenic analyses revealed the existence of duplicated RP genes from 2R (RPL3, RPL7, RPL22 and RPS27) and 3R (RPL5, RPL19, RPL22, RPL41, RPLP2, RPS17, RPS19 and RPS27) in tilapia and even more from 4R in common carp and Atlantic salmon. The RP genes were found to be expressed in all tissues examined, but their expression levels differed among different tissues. Gonadal transcriptome analysis revealed that almost all RP genes were highly expressed, and their expression levels were highly variable between ovaries and testes at different developmental stages in tilapia. No sex- and stage-specific RP genes were found. Eleven RP genes displayed sexually dimorphic expression with nine higher in XY gonad and two higher in XX gonad at all stages examined, which were proved to be phenotypic sex dependent. Quantitative real-time PCR and immunohistochemistry ofRPL5b and RPL24 were performed to validate the transcriptome data. The genomic resources and expression data obtained in this study will contribute to a better understanding of RPs evolution and functions in chordates. View Full-Text
Keywords: cytoplasmic ribosomal protein gene; evolution; transcriptome analysis; Nile tilapia cytoplasmic ribosomal protein gene; evolution; transcriptome analysis; Nile tilapia
►▼ Show Figures 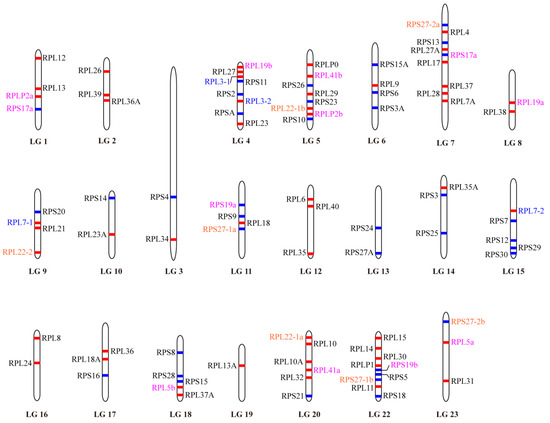