Genomics Education in the Era of Personal Genomics: Academic, Professional, and Public Considerations

Construction of a High-Density Genetic Map and Mapping of Firmness in Grapes (Vitis vinifera L.) Based on Whole-Genome Resequencing

Berry firmness is one of the most important quality traits in table grapes. The underlying molecular and genetic mechanisms for berry firmness remain unclear. We constructed a high-density genetic map based on whole-genome resequencing to identify loci associated with berry firmness. The genetic map had 19 linkage groups, including 1662 bin markers (26,039 SNPs), covering 1463.38 cM, and the average inter-marker distance was 0.88 cM. An analysis of berry firmness in the F1 population and both parents for three consecutive years revealed continuous variability in F1, with a distribution close to the normal distribution. Based on the genetic map and phenotypic data, three potentially significant quantitative trait loci (QTLs) related to berry firmness were identified by composite interval mapping. The contribution rate of each QTL ranged from 21.5% to 28.6%. We identified four candidate genes associated with grape firmness, which are related to endoglucanase, abscisic acid (ABA), and transcription factors. A qRT-PCR analysis revealed that the expression of abscisic-aldehyde oxidase-like gene (VIT_18s0041g02410) and endoglucanase 3 gene (VIT_18s0089g00210) in Muscat Hamburg was higher than in Crimson Seedless at the veraison stage, which was consistent with that of parent berry firmness. These results confirmed that VIT_18s0041g02410 and VIT_18s0089g00210 are candidate genes associated with berry firmness. View Full-Text
Keywords: grape; high-density genetic map; quantitative trait loci; berry firmness; whole-genome resequencing grape; high-density genetic map; quantitative trait loci; berry firmness; whole-genome resequencing
►▼ Show Figures 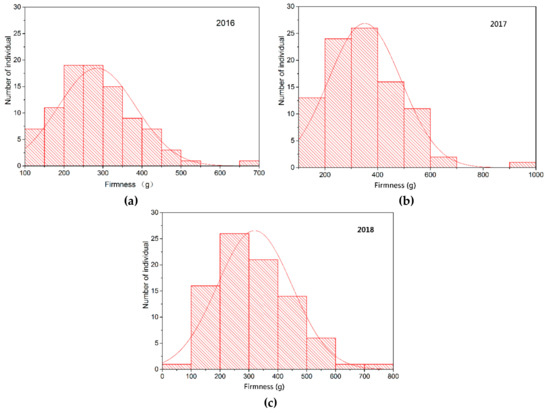