Osteogenic Potential of Bovine Bone Graft in Combination with Laser Photobiomodulation: An Ex Vivo Demonstrative Study in Wistar Rats by Cross-Linked Studies Based on Synchrotron Microtomography and Histology
Next Article in Special Issue

The importance of B cells in kidney transplantation, especially in the case of antibody-mediated rejection (AbMR) and transplantation tolerance, has been highlighted in recent studies [1,2,3]. It is well known the crucial role of B cells in humoral immunity, but they also contribute in other important processes, such as co-stimulation, antigen presentation, and cytokine secretion, all of them mechanisms that modulate the function of T cells [4]. AbMR is considered the main cause of kidney transplant failure [5,6,7]. AbMR is characterized by histological findings, like microvasculature inflammation, anti-HLA antibodies, mainly donor-specific antibodies (DSA), and C4d deposition in renal tissue [8]. However, the mechanisms underlying these processes are not well understood, and therefore, the analysis of different B cell subpopulations and cytokines associated with B cell activation and survival could allow us to improve the knowledge of the pathogenesis, and to predict the allograft outcome.
The B cell homeostasis is modulated by different soluble factors, mainly the B-cell activating factor (BAFF, also known as TNFSF13B or the B lymphocyte stimulator, BLyS) and proliferation-inducing ligand (APRIL). BAFF belonging to the TNF family is a cytokine expressed and secreted by several cells of the immune system, predominantly myeloid cells (monocytes, macrophages, and dendritic cells), neutrophils, and by a subset of T lymphocytes, and is involved in survival, proliferation, differentiation, and maturation of different B cell subpopulations [9,10]. It is able to bind to three receptors, BAFF receptor (BAFFR, also known as TNFRSF13C or BLyS receptor 3), T cell activator and calcium modulating ligand interactor (TACI), and B cell maturation antigen (BCMA). The three receptors are expressed in B cells at different stages of development, being BAFFR the first one to be expressed and the only one required for survival of transitional and naïve B cells. TACI is expressed in B cells upon activation, whereas BCMA is found in germinal center B cells and in terminally differentiated B cells [11].
It has been analyzed that defects in the expression of either BAFF or BAFFR impairs B cell development beyond the immature, transitional type 1 stage and thus, prevents the formation of follicular and marginal zone B cells [12,13]. In the same way, experiments in mice have shown that defects in B cells receptor and BAFFR signaling entail an absence of mature peripheral B cell populations [14]. Thaunat et al. found that BAFF provides survival signals to B cells and allows them to escape rituximab-induced apoptosis in tertiary lymphoid organs [15].
Several studies have demonstrated the important role of BAFF in B cell biology, enhancing humoral immune responses to both T cell dependent and independent antigens, inducing class switch recombination and also, acting as a co-stimulator of T cell activation [16,17]. Furthermore, it is well established the implication of BAFF in the pathogenesis of different autoimmune diseases, such as systemic lupus erythematosus [18], Sjögren’s syndrome [19], rheumatoid arthritis [20], systemic sclerosis [21], or multiple sclerosis [22], among others.
However, in the context of transplantation, there are less studies and the role of BAFF is more controversial. On the one hand, some authors indicate that BAFF reflects the immunological risk profile of patients after kidney transplantation (KT), considering that pretransplant BAFF levels are associated with pretransplant sensitization and are useful in predicting allograft rejection [23,24,25]; BAFF expression correlates with pretransplant panel reactive antibody (PRA), indicating that BAFF may be involved in the development of graft loss [26]; elevated levels of BAFF are associated with antibody-mediated clinical damage in KT [27], and with an increased risk of acute AbMR [28,29,30]. On the other hand, there are authors that affirm that BAFF is not a prognostic marker for allograft dysfunction or survival in KT patients because BAFF serum levels are not related to anti-HLA sensitization [31]; significantly lower levels of BAFF are found in patients experiencing AbMR [32]; or high BAFF is not associated with the graft outcome in KT with rituximab induction [33]. A meta-analysis published recently evaluated the predictive value of serum BAFF for AbMR, indicating that the incidence of AbMR was significantly higher in patients with high levels of BAFF [34].
Another important aspect is the relationship between B and T cells, specifically CD4+ T cells, which are crucial for the generation of functional B cells. Unlike naïve T cells, memory T cells are able to activate in the presence of lower costimulatory signals. Following activation, memory T cells proliferate less than primary responding cells but can produce a greater effector response [35]. However, the different expression of T cell subpopulations and their relationship with B cells is not well understood in KT patients.
Taking into account these circumstances, in this study we analyzed the role of pretransplant BAFF levels, as well as at different time points after KT in the development of AbMR, evaluating together the changes that occur in the distribution of different B and T cell subpopulations in these KT patients.

T cell compartment was also studied as a result of the cooperation between B and T cells, where T cell responses can be influenced by the activity of B cells through co-stimulation signaling and cytokine production. The absolute numbers of CD4+ T cells were reduced in patients with AbMR compared with HS. However, the percentages were similar between patients with AbMR, non-rejection KT patients, and HS. When the different T cell subpopulations (naïve, central memory, effector memory, and TEMRA) were compared, patients with AbMR presented a depletion of CD4+ naïve T cells (29.99; IQR 15.49%–38.78%) with respect to non-rejection patients (42.47; IQR 23.46%–59.70%) and healthy controls (58.32; IQR 39.66%–66.58%), p = 0.038 and p < 0.001, respectively. Conversely, higher levels of CD4+ TEMRA T cells were observed in these patients (12.90; IQR 4.71%–17.95%) in comparison with stable patients (3.29; IQR 1.40%–7.78%) and HS (0.50; IQR 0.26%–1.11%), p = 0.003 and p < 0.001, respectively.
Similar results were found when CD8+ T cell subpopulations were studied, KT patients who suffered a clinical AbMR showed a reduction of CD8+ naïve T cells and a predominance of CD8+ TEMRA T cells.
Considering this different distribution of T cells subpopulations in AbMR patients, a polarization towards a preactivated state was observed in this group of patients, since the naïve/TEMRA ratio was significantly diminished in AbMR patients when compared with non-rejection group and HS, p = 0.002 and p < 0.001, respectively in CD4+ T cells and p = 0.006 and p < 0.001, respectively in CD8+ T cells (Figure 6a,b).

2.5. B and T cell Subpopulations Distribution at 6 and 12 Months after Kidney Transplantation in Subclinical AbMR Patients

As it is well known, induction therapy causes significant cell depletion. However, this effect in contrast to CD4+ and CD8+ T cells does not affect CD19+ B cells.
Regarding what we have seen when pretransplant B cell subpopulations were studied, patients with subclinical AbMR presented a reduction in absolute numbers of transitional T2 cells at 6 months (0.21; IQR 0.08–1.24 cells/µL) and 12 months (0.38; IQR 0.11–0.89 cells/µL) when compared with the non-rejection group (1.11; IQR 0.72-2.24 cells/µL and 1.38; IQR 0.87–2.40 cells/µL), p = 0.067 and p = 0.005, respectively.
A tendency to an increase in memory B cell subpopulations was also detected at 6 months and it was confirmed at 12 months after KT where a statistically significant reduction in the naïve/memory B cells ratio and (Bm2 + Bm2’)/(Bm5 + eBm5) ratio were observed in patients with subclinical AbMR in comparison with non-rejection KT patients, p = 0.05 and p = 0.002, respectively (Figure 8a,b).
At 12 months after kidney transplantation no differences were observed in T cells subpopulations between the analyzed groups. Nevertheless, at 6 months posttransplantation an increase in CD4+ TEMRA cells and therefore, a reduction in CD4+ naïve/TEMRA ratio was observed in patients with subclinical AbMR when compared with non-rejection group, p = 0.012.

The study was conducted following the rules of Declaration of Helsinki and approved by the Regional Ethics Committee in our Institution (reference number: 2014/161; 1 August 2014). A total of 109 consecutive kidney transplants performed in HUMV from February 2015 to February 2018 were recruited for the study after given written consent prior kidney transplantation. KT patients treated with rituximab before kidney transplantation were excluded from the study. The main demographic, immunological, and clinical parameters are summarized in Table 1 and Supplementary Table S1. The patients were prospectively monitored prior KT and subsequently 6 and 12 months after KT. Indication graft biopsies were performed due to the presence of a sustained delayed graft function, an increase of serum creatinine or proteinuria development. Surveillance biopsies were routinely carried out at one-year after transplantation. All the biopsies performed were reclassified according to the Banff 2017 criteria. Antibody mediated rejection was diagnosed following the Banff criteria [50]. Forty sex–age matched healthy subjects (HS) were tested for immunological parameters as control.
Surveillance biopsy was routinely performed at one year after KT in 70 patients after given written informed consent.
For the prospective analysis at 6 and 12 months after KT, 51 patients without clinical rejection during the first 12 months, which did not received any treatment (thymoglobulin, rituximab, plasmapheresis, or intravenous immunoglobulin) apart from induction therapies and maintenance immunosuppressive treatments, and with a surveillance biopsy that showed the possibility of the development of a subclinical AbMR were included. Results from surveillance biopsies showed that five of these patients (9.8%) developed a subclinical AbMR.

4.4. Flow Cytometry for B Cell Subsets

Statistical analysis was performed using SPSS v.22.0 (IBM Corp., Armonk, NY, USA) and Graph Pad Prism software. The distribution of continuous variables was assessed using Kolmogorov–Smirnov/Shapiro–Wilk tests where indicated. Results were expressed as mean ± standard deviation or median + interquartile range (IQR) for continuous variables and percentages for categorical data. Comparisons were based on the chi squared test for categorical data and Mann–Whitney test for nonparametric continuous data. Within-group comparison of quantitative variables was undertaken using the Wilcoxon matched-pair test. Spearman rank correlation was used to quantify associations between continuous variables. Receiver operating characteristic (ROC) analysis and Youden’s index were used to determine the optimal cut-point with higher sensitivity and specificity. Rejection free survival was tested by the Kaplan–Meier survival test. Cox and multivariate regression analysis was performed to assess the independent role of the studied variables in the development of AbMR. Collinearity between variables included in the multivariate analysis was also tested. A two-sided p value ≤0.05 was considered statistically significant. In the figures * indicates p < 0.05, ** p < 0.01, and *** p < 0.001.

We are grateful to Sandra Raso and Consuelo Agüero for their excellent technical helpful. 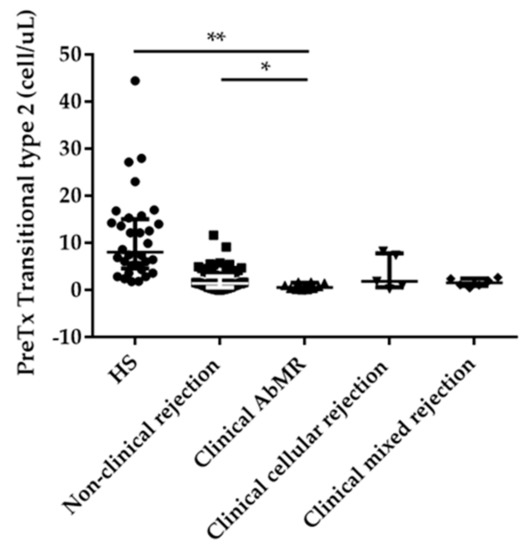 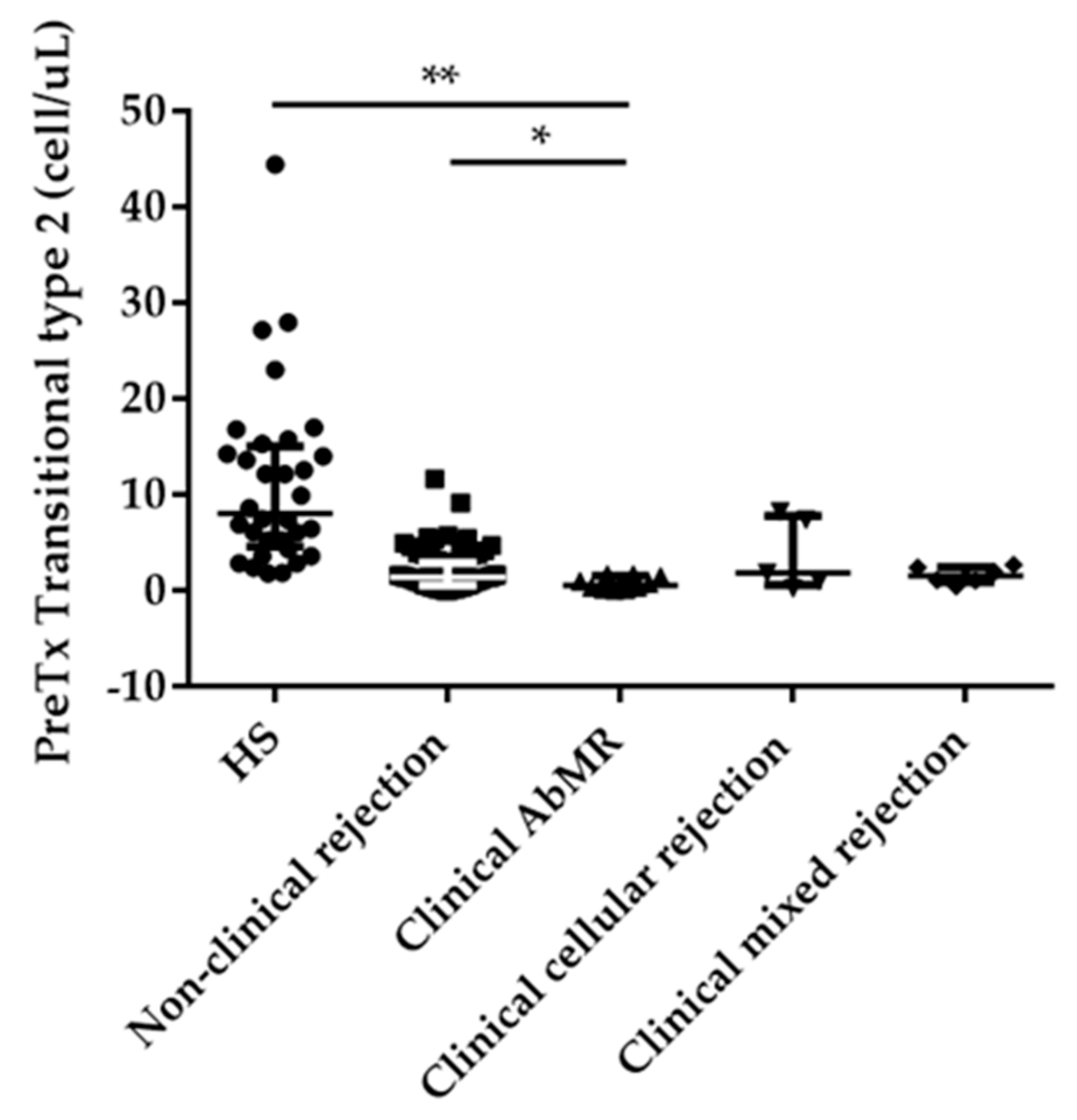 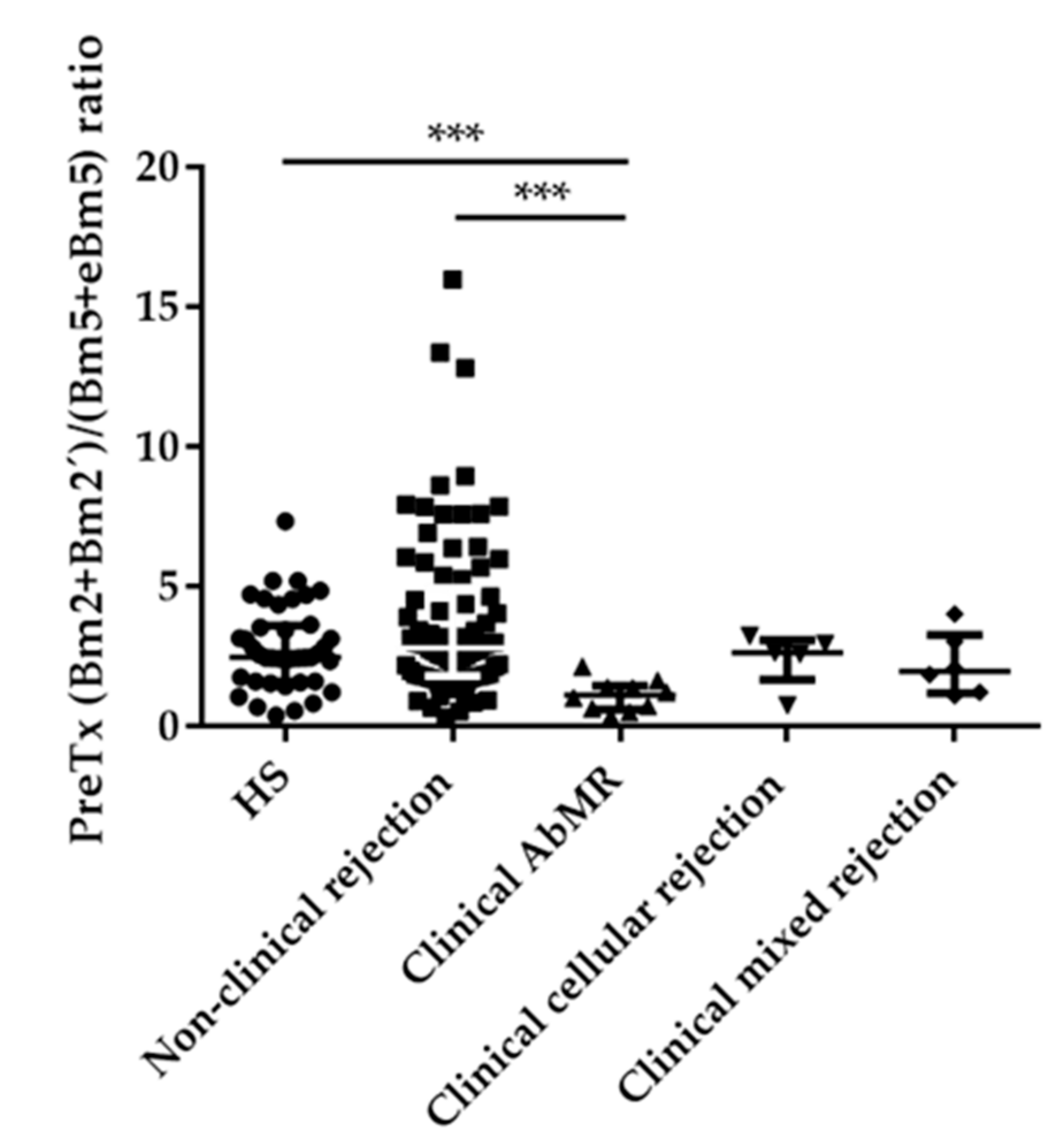 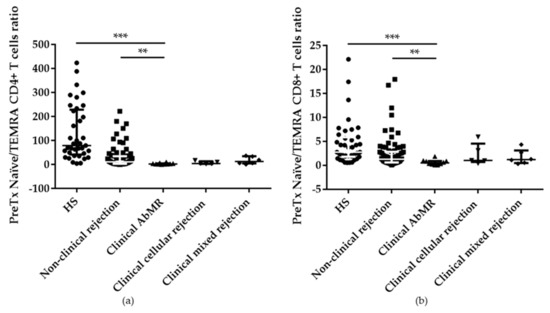 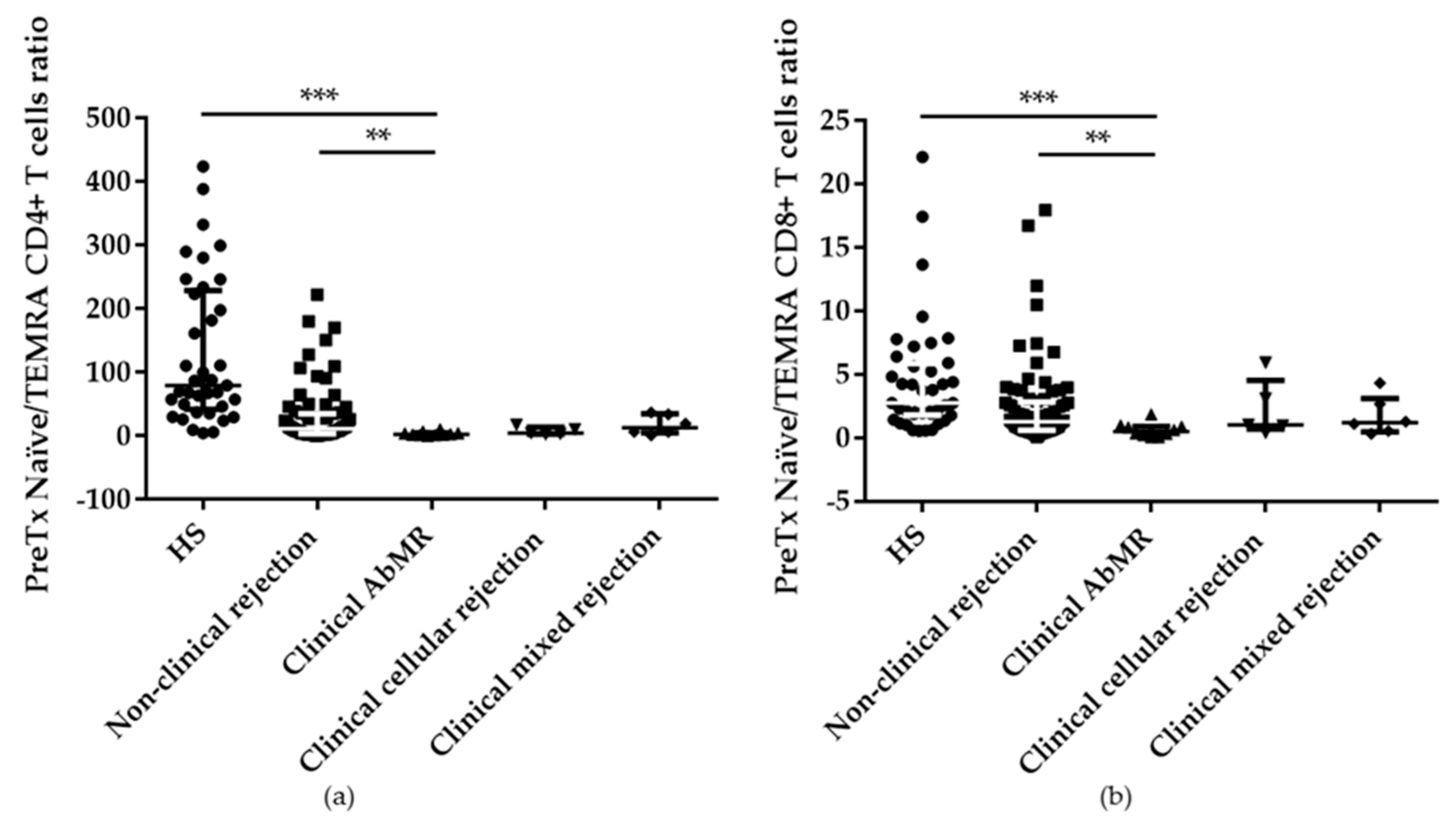 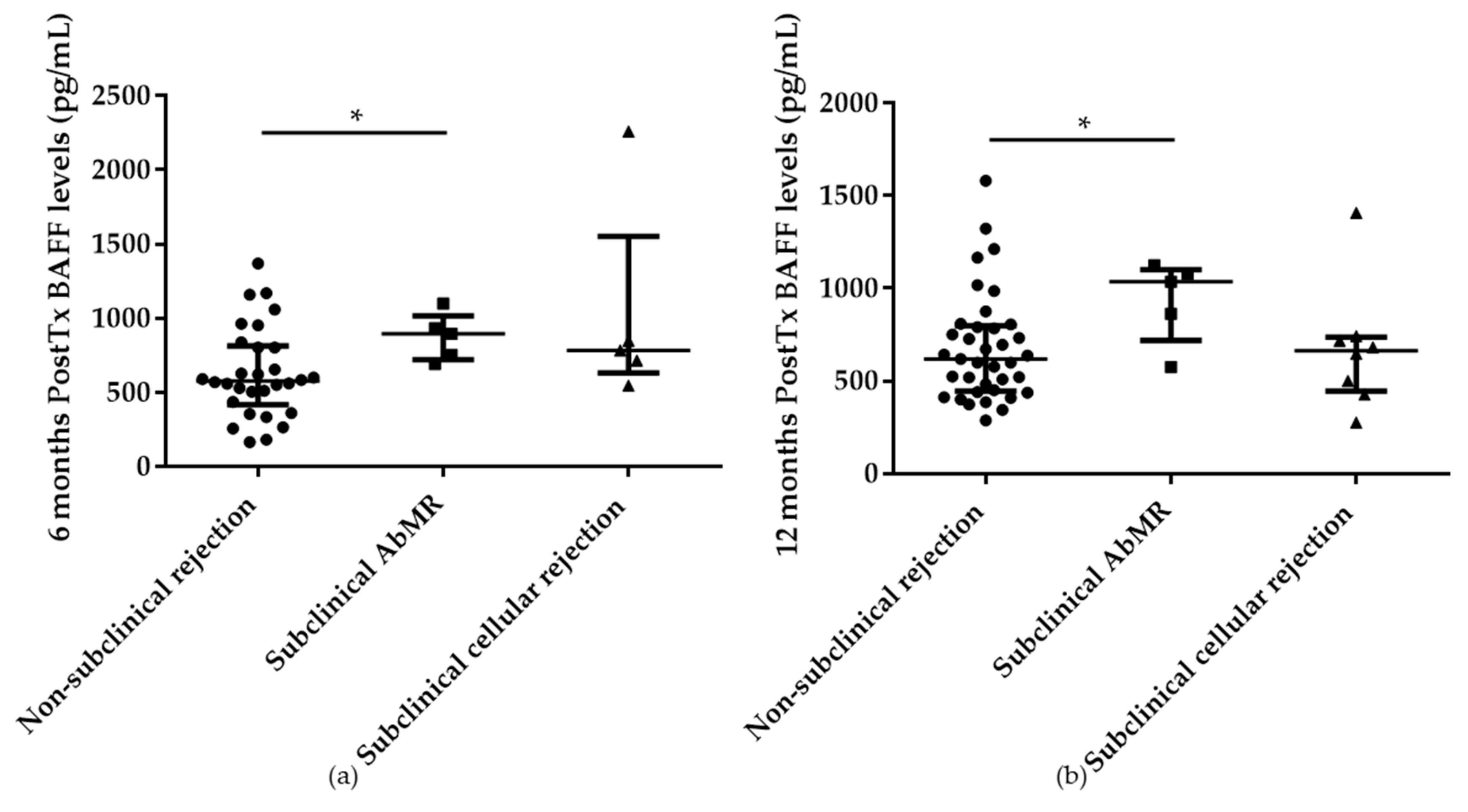 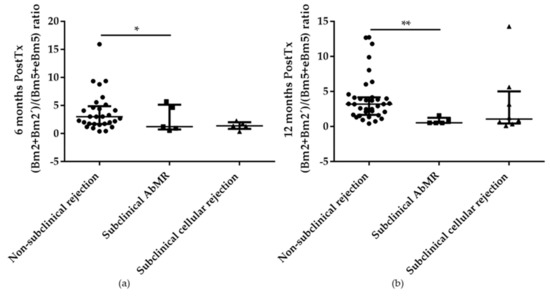 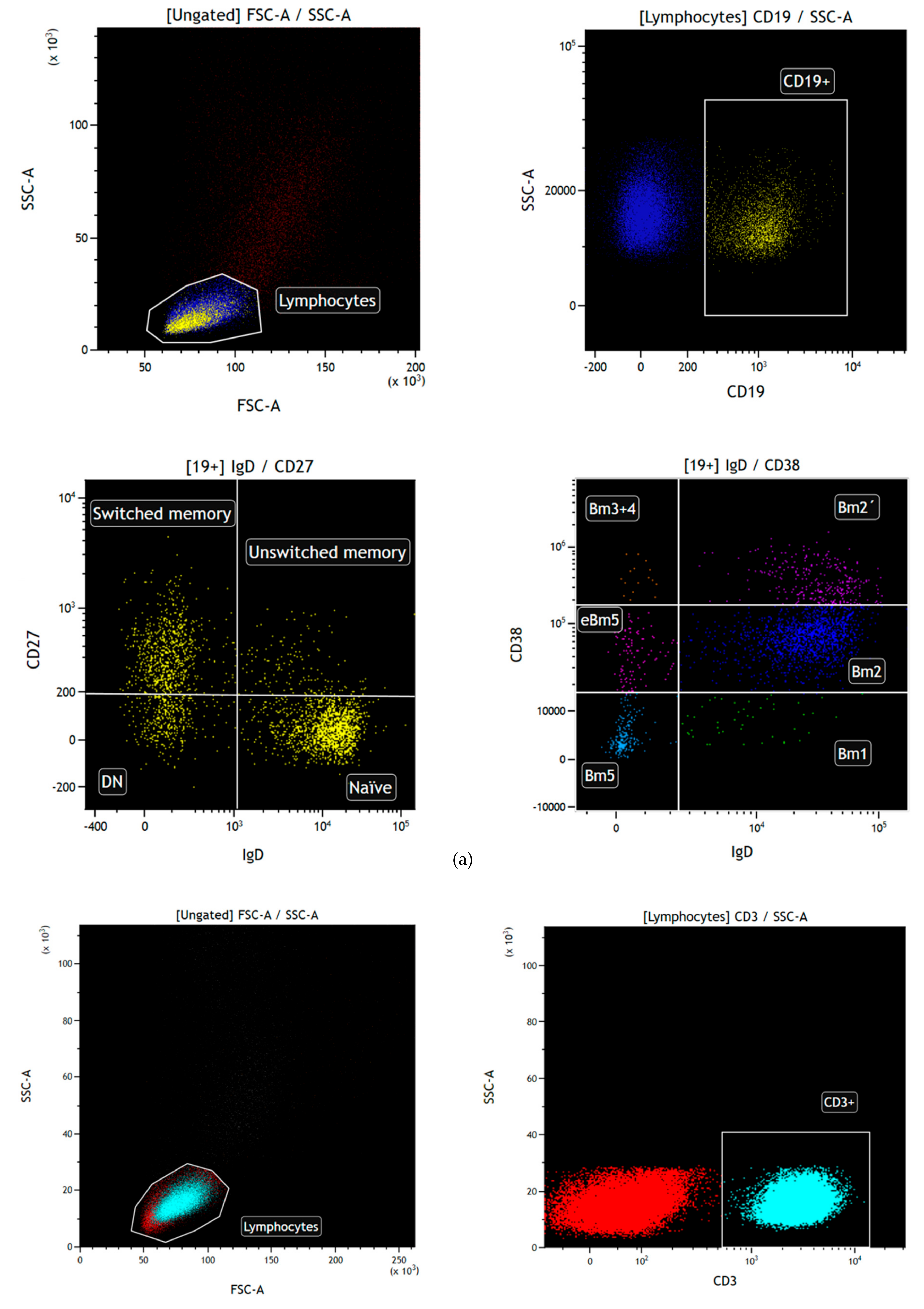