Chrysin exhibits anti-inflammatory and antioxidant activities. Here, the gastroprotective effect of chrysin was investigated in mouse models of gastric ulcer induced by absolute ethanol, acetic acid, and ischemia-reperfusion injury. The gastric-healing effect was evaluated at 7 and 14 days after treatment; the mechanism of action was verified using the expression of metalloproteinase 2 (MMP-2) and 9 (MMP-9), caspase-3, cyclooxygenase 1 (COX-1) and 2 (COX-2), epidermal growth factor (EGF), and interleukin-10. Chrysin (10 mg/kg) inhibited macroscopic lesions and increased catalase activity in the mouse model established using absolute ethanol. It ameliorated the gastric ulcer caused by acetic acid by improving the expression of inflammatory genes such as COX-2, inhibiting negative remodeling promoted by MMP-9, increasing cell proliferation effect via EGF, and reducing cellular apoptosis by modulating caspase-3. A faster healing effect was evident in the first 7 days of treatment compared to 14 days of treatment, indicating the pharmacological potential of chrysin. Overall, these results demonstrate the potent effect of chrysin in the gastrointestinal tract and elucidate the genes involved in the healing of gastric ulcers. Moreover, an increase in the levels of gastric mucosa defensive factors is involved in the activity of chrysin in the gastric mucosa.
Keywords: chrysin; gastric ulcer; gastroprotective effect; tissue remodeling; healing chrysin; gastric ulcer; gastroprotective effect; tissue remodeling; healing

A peptic ulcer is a lesion in the gastric mucosa or duodenal lining; it is a condition that affects populations worldwide. The problem is further aggravated by the indiscriminate use of anti-inflammatory drugs and non-steroidal anti-inflammatory drugs (NSAIDs) for various purposes [1]. Gastrointestinal diseases tend to progressively increase with aging and thus an increased incidence is observed in aging populations [2]. The most frequent and severe complication of peptic ulcers is bleeding, which occurs in 1 in 1000 individuals each year and continues to be one of the most common causes of hospitalization [3]. The bleeding is often caused by the presence of the bacterium Helicobacter pylori and/or the use of NSAIDs [4]. Determining the etiology of peptic ulcers is highly difficult due to the heterogeneity of this disease [5,6]. It is considered a disease of modern times, accelerated by factors such as a busy lifestyle (stress), common vices (tobacco and alcohol), and an unbalanced diet, and it is often fatal [7,8]. The available treatments for this disease include the use of proton pump inhibitors (PPIs), histamine receptor antagonists, and antibiotics. However, these treatments result in the development of several adverse effects [1], such as gastroenteric reactions, rebound effects, hypergastrinemia, hepatic and renal toxicities, and gastric adenocarcinoma [2,3,4,5]. Alternative treatments using compounds isolated from some plants have been developed to alleviate the severity of ulcerative diseases. Flavonoids are a group of polyphenolic compounds derived from plants, and they can be categorized as simple phenols, phenolic acids, coumarins, condensed and hydrolysable tannins, lignans, and lignins [6]. Chrysin is a flavone found naturally in honey, propolis, and plant species such as Passiflora caerulea L. [7]. Its antioxidant, anti-inflammatory, anti-colorectal, neuroprotective, hepatoprotective, cardioprotective, and antidiabetic activities have been reported, which suggest the therapeutic potential of chrysin [8,9,10,11]. Therefore, in this study, we evaluated the potential gastroprotective effect and healing action of chrysin in different experimental mice models and assessed the potential underlying mechanisms of action.

The in vivo experimental procedures were conducted using male Swiss mice (Mus musculus) obtained from Multidisciplinary Center for Biological Investigation in the Area of Laboratory Animals (Unicamp-SP-Brazil); they were divided into the following groups (5–6 individuals/group): negative control (saline solution, 0.9% NaCl), positive control (lansoprazole 30 mg/kg or carbenoxolone 100 mg/kg), chrysin (10, 50 and 100 mg/kg-Cayman, Ann Arbor, MI, USA) and sham (exposed to the stress of fasting and procedure/surgery). The animals were fed Presence® diet, with water ad libitum and maintained under controlled conditions of illumination (12:12 light/dark cycle) and temperature (22 ± 2 °C). All animals were fasted (10 h) before the assays. The mice were kept in cages of polypropylene. All the experimental practices were approved by the Ethics Committee in Experimental Animal Care of the São Francisco University (protocol 001.06.2016 date 26 August 2016).

3.2. Evaluation of Gastric Protective and Healing Effects of Chrysin

Male mice (n = 5) were separated in the following groups and deprived of food for 12 h, with water ad libitum. The mice of different groups received the following treatments: vehicle (saline 10 mL/kg), carbenoxolone (100 mg/kg), and chrysin (10, 50, and 100 mg/kg, Sigma Aldrich). The absolute ethanol at an oral dose of 0.2 mL/animal was administered 60 min after the pretreatment. After 60 min of ethanol administration, the animals were euthanized, and the stomachs were collected for analysis of gastric lesions using the software AvSoft BioView Spectra (São Paulo, Brazil). All treatments were given by oral gavage.

To determine the activity of catalase, fragments of gastric mucosa were homogenized in RIPA buffer with protease inhibitor cocktail. After homogenization, the samples were centrifuged at 13,680 × g for 15 min at 4 °C. The supernatant was diluted in the following buffer: KH2PO4 (phosphate dihydrogen potassium) 25 mM pH 7.5, EDTA 1 mM, BSA 1% in the ratio of 1:20 (w/v). Tissue homogenate (20 µL) was placed in 96-well plate with 100 µL of assay buffer (KH2PO4 250 mM pH 7.0), 30 µL of methanol, and 20 µL of hydrogen peroxide (35.3 mM). The plate was incubated for 10 min at room temperature. After that, 15 µL of potassium periodate (65.2 mM) was added to the wells, and the plates were again incubated at room temperature. The absorbance was read at 540 nm and the final concentrations were multiplied by 4000. Results were expressed in U/g tissue. All experiments were conducted in duplicate.

Strips of the stomach were homogenized in RIPA buffer with protease inhibitor cocktail. After homogenization, the samples were centrifuged in 13,680× g for 15 min at 4 °C. The supernatant was diluted in phosphate buffer (0.1 M pH 7.4) in the proportion of 1:20 (w/v). To 100 µL of tissue homogenate was added 150 µL of cocktail containing: hypoxanthine, xanthine oxidase and nitro blue tetrazolium (NBT) in the ratio 1:1:1. The absorbance was read each minute during a period of ten minutes, at 37 °C and 560 nm. The integral was multiplied by 800, and the results were expressed in U/g tissue. All experiments were conducted in duplicate.

Fragments of gastric mucosa were homogenized in RIPA buffer with protease inhibitor cocktail. After homogenization, the samples were centrifuged in 13,680× g for 15 min at 4 °C. In a 96-well plate, 100 µL of samples (diluted in 0.1 M PB, pH 7.4, 1:10 w/v) and 100 µL Tris/EDTA buffer were added and read at 412 nm. After the first read, 20 µL of 5,5′-dithio-bis-2-nitrobenzoic acid (DTNB) was added and the plate was read again at 412 nm for 15 min. The concentration was multiplied by 10 and the results were expressed in nmol/g of tissue. All experiments were conducted in duplicates

Confirmation that chrysin elevates the mucus production was realized by the quantification of adhered mucus according to [38]. Briefly, animals (n = 6) were fed for 8 h and pretreated with vehicle (saline 10 mL/kg), positive control (carbenoxolone 200 mg/kg) and chrysin (10 mg/kg). All treatments were given by oral gavage. After, one hour of treatment, mice received absolute ethanol in the dose of 0.2 mL/animal. After another hour, the animals were euthanized and the glandular area of the stomach were placed in a solution of Alcian blue (Alcian blue w/v 0.1%, sucrose, 0.16 mol/L, sodium acetate 0.05 mol/L, pH 5.8) for two hours. The stomachs were washed in 0.25 M sucrose solution and kept in 0.5 M magnesium chloride for 2 h while shaking them periodically. After two hours had elapsed from the last procedure, the stomachs were removed, dried, weighed, and discarded. Diethyl ether was added to the solution in the ratio 1:1; after shaking and centrifugation (3874× g) the supernatant was discarded, and the concentration of Alcian blue was measured in a spectrophotometer with λ = 598 nm. The results are expressed as µg of Alcian blue/g of tissue.

Mice (n = 6) were divided in different groups: negative control (saline 10 mL/kg), positive control (lansoprazole 30 mg/kg), and test group (chrysin 10 mg/kg). The treatments were given by oral gavage. One hour before the surgical procedure, the animals received the treatments (vehicle, lansoprazole, and chrysin). After 1 h, the animals were anesthetized with xylazine and ketamine (0.4 and 0.8 mg/kg, respectively, intramuscular) and had their abdomens opened to exposure of celiac artery. This vessel was isolated, and a microvascular clamp was placed, blocking the blood flow for 30 min. After this period, the clamp was removed (reperfusion), and 60 min were allowed to elapse before the animals were euthanized for the macroscopic analysis of lesion.

Male Swiss mice (n = 6) were kept in fasting with water ad libitum for 8 h before the experiment. After anesthesia, a laparotomy with an epigastric incision was made in all animals. A plastic micro tube of 4.2 mm diameter was pressed under the serosa wall, where 35 µL of acetic acid 80% v/v was applied for 20 s in the serosae surface and completely removed from the stomach using a saline solution. After the procedure, the abdomen was sutured, and the animals were fed normally. Chrysin (10 mg/kg), lansoprazole (30 mg/kg), or vehicle (saline 10 mL/kg) were given daily for 7 or 14 days starting one day after the surgery. One day after the last administration of treatments, the animals were euthanized, and the stomachs were collected for analysis of lesions. All treatments were given by oral gavage.

The authors thank the FAPESP and CAPES (Coordenação de Aperfeiçoamento Pessoal de Nível Superior) for collaboration on this research. 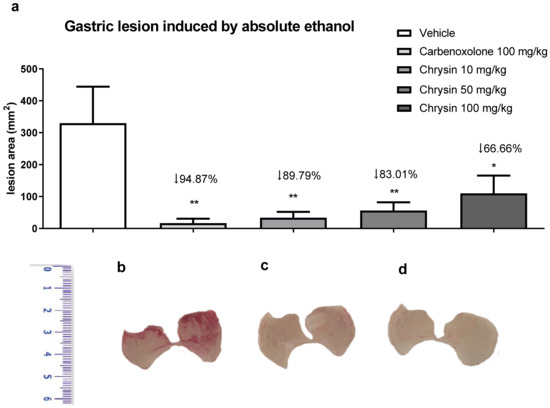 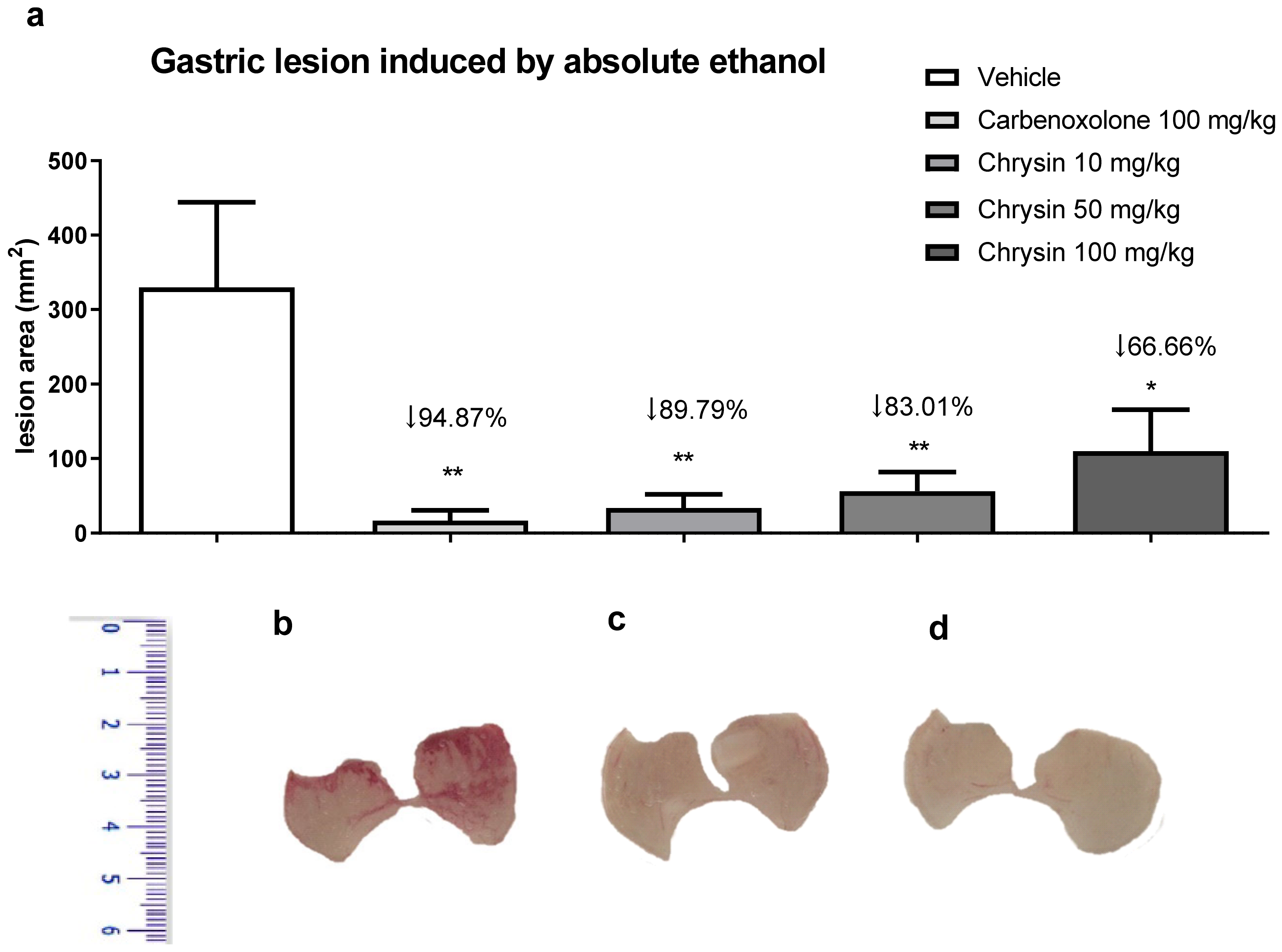 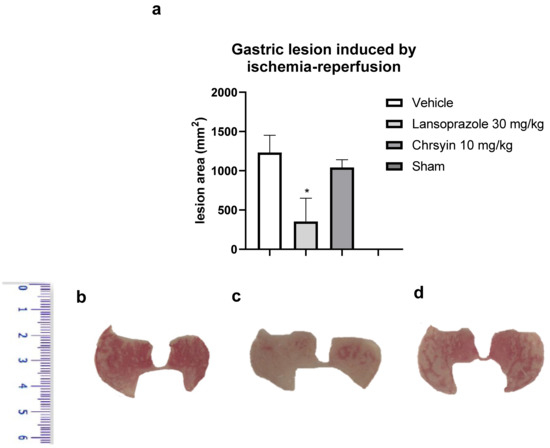 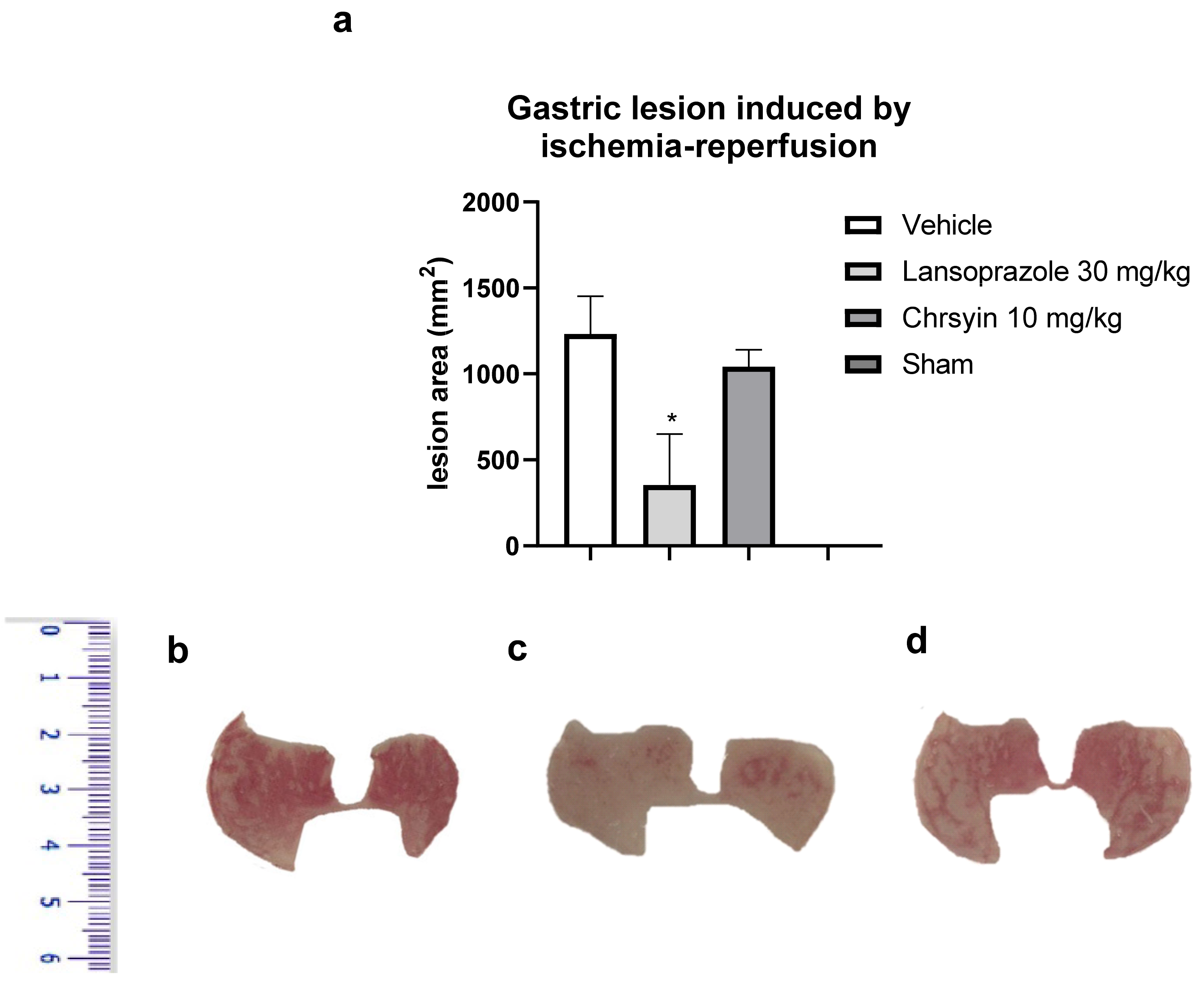