Disruption of the Unique ABCG-Family NBD:NBD Interface Impacts Both Drug Transport and ATP Hydrolysis
Next Article in Special Issue

During mammalian embryonic development, primary cilia transduce and regulate several signaling pathways. Among the various pathways, Sonic hedgehog (SHH) is one of the most significant. SHH signaling remains quiescent in adult mammalian tissues. However, in multiple adult tissues, it becomes active during differentiation, proliferation, and maintenance. Moreover, aberrant activation of SHH signaling occurs in cancers of the skin, brain, liver, gallbladder, pancreas, stomach, colon, breast, lung, prostate, and hematological malignancies. Recent studies have shown that the tumor microenvironment or stroma could affect tumor development and metastasis. One hypothesis has been proposed, claiming that the pancreatic epithelia secretes SHH that is essential in establishing and regulating the pancreatic tumor microenvironment in promoting cancer progression. The SHH signaling pathway is also activated in the cancer stem cells (CSC) of several neoplasms. The self-renewal of CSC is regulated by the SHH/Smoothened receptor (SMO)/Glioma-associated oncogene homolog I (GLI) signaling pathway. Combined use of SHH signaling inhibitors and chemotherapy/radiation therapy/immunotherapy is therefore key in targeting CSCs. View Full-Text
Keywords: hedgehog; smoothened; cancer stem cells hedgehog; smoothened; cancer stem cells
►▼ Show Figures 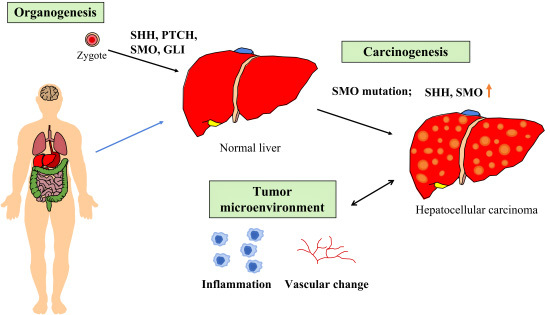