Sledgehammer to Scalpel: Broad Challenges to the Heart and Other Tissues Yield Specific Cellular Responses via Transcriptional Regulation of the ER-Stress Master Regulator ATF6α
Previous Article in Special Issue

Importance of Melatonin in Assisted Reproductive Technology and Ovarian Aging

Melatonin is probably produced in all cells but is only secreted by the pineal gland. The pineal secretion of melatonin is determined by the light–dark cycle, and it is only released at night. Melatonin regulates biological rhythms via its receptors located in the suprachiasmatic nuclei of the hypothalamus. Melatonin also has strong antioxidant activities to scavenge free radicals such as reactive oxygen species (ROS). The direct free radical scavenging actions are receptor independent. ROS play an important role in reproductive function including in the ovulatory process. However, excessive ROS can also have an adverse effect on oocytes because of oxidative stress, thereby causing infertility. It is becoming clear that melatonin is located in the ovarian follicular fluid and in the oocytes themselves, which protects these cells from oxidative damage as well as having other beneficial actions in oocyte maturation, fertilization, and embryo development. Trials on humans have investigated the improvement of outcomes of assisted reproductive technology (ART), such as in vitro fertilization and embryo transfer (IVF-ET), by way of administering melatonin to patients suffering from infertility. In addition, clinical research has examined melatonin as an anti-aging molecule via its antioxidative actions, and its relationship with the aging diseases, e.g., Alzheimer’s and Parkinson’s disease, is also underway. Melatonin may also reduce ovarian aging, which is a major issue in assisted reproductive technology. This review explains the relationship between melatonin and human reproductive function, as well as the clinical applications expected to improve the outcomes of assisted reproductive technology such as IVF, while also discussing possibilities for melatonin in preventing ovarian aging. View Full-Text
Keywords: melatonin; ovarian aging; reactive oxygen; oxidative stress; infertility melatonin; ovarian aging; reactive oxygen; oxidative stress; infertility
►▼ Show Figures 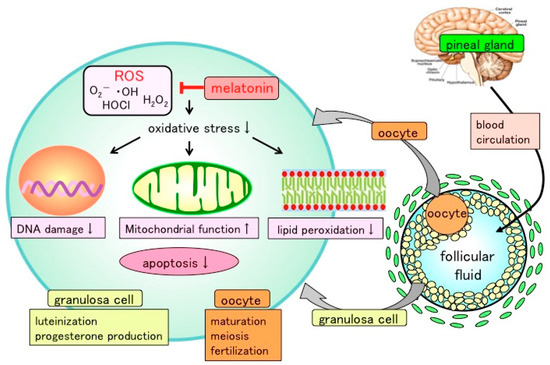