Ion Channels in The Pathogenesis of Endometriosis: A Cutting-Edge Point of View
Previous Article in Journal

Interleukin-27 (IL-27) has shown promise in halting tumor growth and mediating tumor regression in several models, including prostate cancer. We describe our findings on the effects of IL-27 on the gene expression changes of TC2R prostate adenocarcinoma cells. We utilized RNAseq to assess profile differences between empty vector control, vector delivering IL-27 modified at its C-terminus with a non-specific peptide, and IL-27 modified at the C-terminus with a peptide targeting the IL-6-Rα. The targeted IL-27 had higher bioactivity and activity in vivo in a recent study by our group, but the mechanisms underlying this effect had not been characterized in detail at the gene expression level on tumor cells. In the present work, we sought to examine potential mechanisms for targeted IL-27 enhanced activity directly on tumor cells. The targeted IL-27 appeared to modulate several changes that would be consistent with an anti-tumor effect, including upregulation in the Interferon (IFN) and Interferon regulatory factor (IRF), oxidative phosphorylation, Janus kinase/Signal transducers and activators of transcription (JAK/STAT), and eukaryotic initiation factor 2 (EIF2) signaling. Of these signaling changes predicted by ingenuity pathway analyses (IPA), the novel form also with the highest significance (-log(Benjamini–Hochberg (B-H)) p-value) was the EIF2 signaling upregulation. We validated this predicted change by assaying for eukaryotic initiation factor 2 alpha (eIF2α), or phosphorylated eIF2α (p-eIF2α), and caspase-3 levels. We detected an increase in the phosphorylated form of eIF2α and in the cleaved caspase-3 fraction, indicating that the EIF2 signaling pathway was upregulated in these prostate tumor cells following targeted IL-27 gene delivery. This approach of targeting cytokines to enhance their activity against cancer cells is a novel approach to help augment IL-27′s bioactivity and efficacy against prostate tumors and could be extended to other conditions where it could help interfere with the EIF2α pathway and promote caspase-3 activation. View Full-Text
Keywords: interleukin-27; peptide targeting; gene delivery; prostate cancer; RNAseq; eIF2α interleukin-27; peptide targeting; gene delivery; prostate cancer; RNAseq; eIF2α
►▼ Show Figures 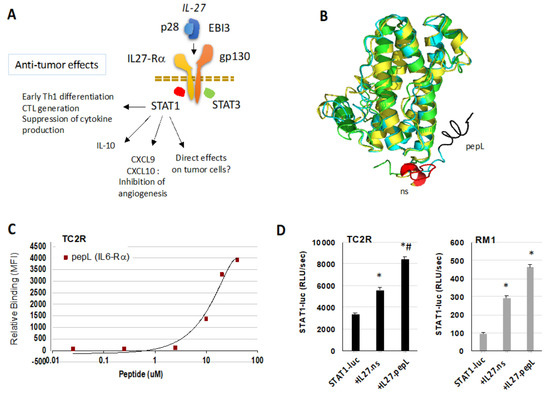