There is a lack of reliable biomarkers for disorders of the central nervous system (CNS), and diagnostics still heavily rely on symptoms that are both subjective and difficult to quantify. The cerebrospinal fluid (CSF) is a promising source of biomarkers due to its close connection to the CNS. Extracellular vesicles are actively secreted by cells, and proteomic analysis of CSF extracellular vesicles (EVs) and their molecular composition likely reflects changes in the CNS to a higher extent compared with total CSF, especially in the case of neuroinflammation, which could increase blood–brain barrier permeability and cause an influx of plasma proteins into the CSF. We used proximity extension assay for proteomic analysis due to its high sensitivity. We believe that this methodology could be useful for de novo biomarker discovery for several CNS diseases. We compared four commercially available kits for EV isolation: MagCapture and ExoIntact (based on magnetic beads), EVSecond L70 (size-exclusion chromatography), and exoEasy (membrane affinity). The isolated EVs were characterized by nanoparticle tracking analysis, ELISA (CD63, CD81 and albumin), and proximity extension assay (PEA) using two different panels, each consisting of 92 markers. The exoEasy samples did not pass the built-in quality controls and were excluded from downstream analysis. The number of detectable proteins in the ExoIntact samples was considerably higher (~150% for the cardiovascular III panel and ~320% for the cell regulation panel) compared with other groups. ExoIntact also showed the highest intersample correlation with an average Pearson’s correlation coefficient of 0.991 compared with 0.985 and 0.927 for MagCapture and EVSecond, respectively. The median coefficient of variation was 5%, 8%, and 22% for ExoIntact, MagCapture, and EVSecond, respectively. Comparing total CSF and ExoIntact samples revealed 70 differentially expressed proteins in the cardiovascular III panel and 17 in the cell regulation panel. To our knowledge, this is the first time that CSF EVs were analyzed by PEA. In conclusion, analysis of CSF EVs by PEA is feasible, and different isolation kits give distinct results, with ExoIntact showing the highest number of identified proteins with the lowest variability. View Full-Text
Keywords: extracellular vesicles; cerebrospinal fluid; proximity extension assay extracellular vesicles; cerebrospinal fluid; proximity extension assay
►▼ Show Figures 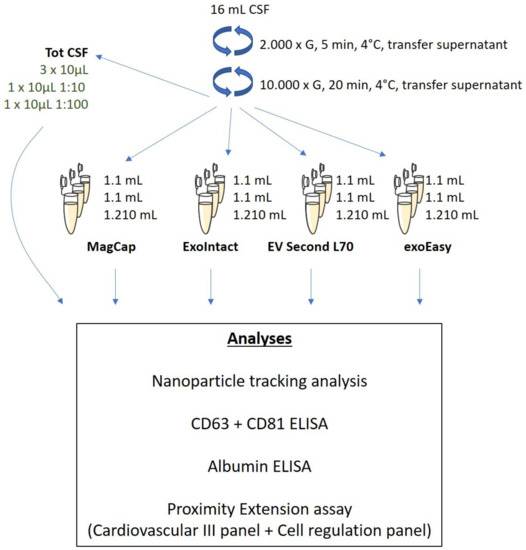