The Role of Nitric Oxide in Cancer: Master Regulator or NOt?
Next Article in Special Issue

Brassica Bioactives Could Ameliorate the Chronic Inflammatory Condition of Endometriosis

Endometriosis is a chronic, inflammatory, hormone-dependent disease characterized by histological lesions produced by the presence of endometrial tissue outside the uterine cavity. Despite the fact that an estimated 176 million women are affected worldwide by this gynecological disorder, risk factors that cause endometriosis have not been properly defined and current treatments are not efficient. Although the interaction between diet and human health has been the focus of many studies, little information about the correlation of foods and their bioactive derivates with endometriosis is available. In this framework, Brassica crops have emerged as potential candidates for ameliorating the chronic inflammatory condition of endometriosis, due to their abundant content of health-promoting compounds such as glucosinolates and their hydrolysis products, isothiocyanates. Several inflammation-related signaling pathways have been included among the known targets of isothiocyanates, but those involving aquaporin water channels have an important role in endometriosis. Therefore, the aim of this review is to highlight the promising effects of the phytochemicals present in Brassica spp. as major candidates for inclusion in a dietary approach aiming to improve the inflammatory condition of women affected with endometriosis. This review points out the potential roles of glucosinolates and isothiocyanates from Brassicas as anti-inflammatory compounds, which might contribute to a reduction in endometriosis symptoms. In view of these promising results, further investigation of the effect of glucosinolates on chronic inflammatory diseases, either as diet coadjuvants or as therapeutic molecules, should be performed. In addition, we highlight the involvement of aquaporins in the maintenance of immune homeostasis. In brief, glucosinolates and the modulation of cellular water by aquaporins could shed light on new approaches to improve the quality of life for women with endometriosis. View Full-Text
Keywords: aquaporins; Brassica; isothiocyanates; indoles; endometriosis; inflammation aquaporins; Brassica; isothiocyanates; indoles; endometriosis; inflammation
►▼ Show Figures 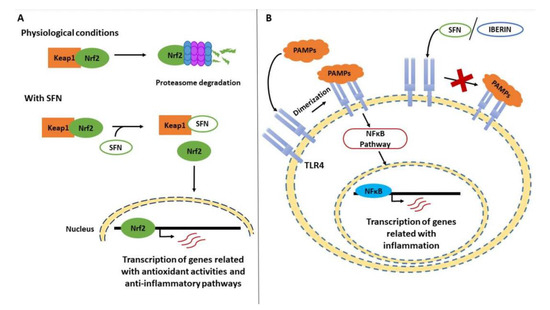