A Matter of Size and Placement: Varying the Patch Size of Anisotropic Patchy Colloids

The surface activity, aggregates morphology, size and charge characteristics of binary catanionic mixtures containing a cationic amino acid-derived surfactant N(π), N(τ)-bis(methyl)-L-Histidine tetradecyl amide (DMHNHC14) and an anionic surfactant (the lysine-based surfactant Nα-lauroyl-Nεacetyl lysine (C12C3L) or sodium myristate) were investigated for the first time. The cationic surfactant has an acid proton which shows a strong pKa shift irrespective of aggregation. The resulting catanionic mixtures exhibited high surface activity and low critical aggregation concentration as compared with the pure constituents. Catanionic vesicles based on DMHNHC14/sodium myristate showed a monodisperse population of medium-size aggregates and good storage stability. According to Small-Angle X-Ray Scattering (SAXS), the characteristics of the bilayers did not depend strongly on the system composition for the positively charged vesicles. Negatively charged vesicles (cationic surfactant:myristate ratio below 1:2) had similar bilayer composition but tended to aggregate. The DMHNHC14-rich vesicles exhibited good antibacterial activity against Gram-positive bacteria and their bactericidal effectivity declined with the decrease of the cationic surfactant content in the mixtures. The hemolytic activity and cytotoxicity of these catanionic formulations against non-tumoral (3T3, HaCaT) and tumoral (HeLa, A431) cell lines also improved by increasing the ratio of cationic surfactant in the mixture. These results indicate that the biological activity of these systems is mainly governed by the cationic charge density, which can be modulated by changing the cationic/anionic surfactant ratio in the mixtures. Remarkably, the incorporation of cholesterol in those catanionic vesicles reduces their cytotoxicity and increases the safety of future biomedical applications of these systems. View Full-Text
Keywords: amino acid-based surfactants; catanionic vesicles; SAXS; self-assembly; antibacterial activity; cytotoxicity amino acid-based surfactants; catanionic vesicles; SAXS; self-assembly; antibacterial activity; cytotoxicity
►▼ Show Figures 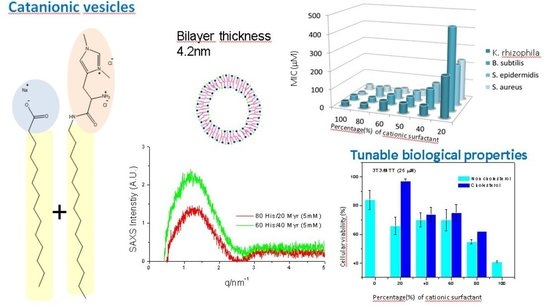