In Vitro Interaction of 5-Aminoorotic Acid and Its Gallium(III) Complex with Superoxide Radical, Generated by Two Model Systems
Previous Article in Special Issue

Soil Metaproteomics for the Study of the Relationships Between Microorganisms and Plants: A Review of Extraction Protocols and Ecological Insights

Metal toxicity is a common problem in crop species worldwide. Some metals are naturally toxic, whereas others such as manganese (Mn) are essential micro-nutrients for plant growth but can become toxic when in excess. Changes in the composition of the xylem sap, which is the main pathway for ion transport within the plant, is therefore vital to understanding the plant’s response(s) to metal toxicity. In this study we have assessed the effects of exposure of tomato roots to excess Mn on the protein profile of the xylem sap, using a shotgun proteomics approach. Plants were grown in nutrient solution using 4.6 and 300 µM MnCl2 as control and excess Mn treatments, respectively. This approach yielded 668 proteins reliably identified and quantified. Excess Mn caused statistically significant (at p ≤ 0.05) and biologically relevant changes in relative abundance (≥2-fold increases or ≥50% decreases) in 322 proteins, with 82% of them predicted to be secretory using three different prediction tools, with more decreasing than increasing (181 and 82, respectively), suggesting that this metal stress causes an overall deactivation of metabolic pathways. Processes most affected by excess Mn were in the oxido-reductase, polysaccharide and protein metabolism classes. Excess Mn induced changes in hydrolases and peroxidases involved in cell wall degradation and lignin formation, respectively, consistent with the existence of alterations in the cell wall. Protein turnover was also affected, as indicated by the decrease in proteolytic enzymes and protein synthesis-related proteins. Excess Mn modified the redox environment of the xylem sap, with changes in the abundance of oxido-reductase and defense protein classes indicating a stress scenario. Finally, results indicate that excess Mn decreased the amounts of proteins associated with several signaling pathways, including fasciclin-like arabinogalactan-proteins and lipids, as well as proteases, which may be involved in the release of signaling peptides and protein maturation. The comparison of the proteins changing in abundance in xylem sap and roots indicate the existence of tissue-specific and systemic responses to excess Mn. Data are available via ProteomeXchange with identifier PXD021973. View Full-Text
Keywords: xylem sap; manganese toxicity; proteome; tomato; shotgun proteomics xylem sap; manganese toxicity; proteome; tomato; shotgun proteomics
►▼ Show Figures 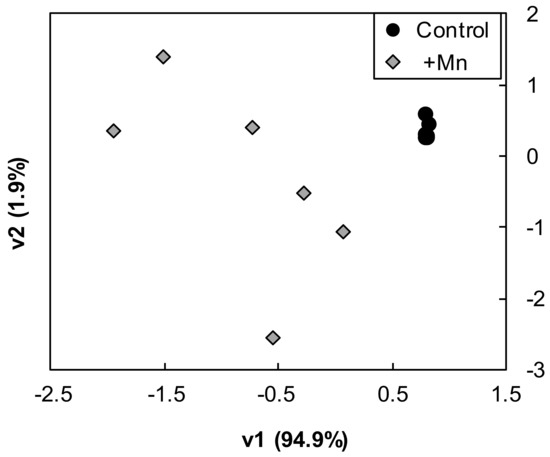