Neurogranin and VILIP-1 as Molecular Indicators of Neurodegeneration in Alzheimer’s Disease: A Systematic Review and Meta-Analysis
Next Article in Special Issue

Platelet biology owes to intravital studies not only a better understanding of platelets’ role in primary hemostasis but also findings that platelets are important factors in inflammation and atherosclerosis. Researchers who enter the field of intravital platelet studies may be confused by the heterogeneity of experimental protocols utilized. On the one hand, there are a variety of stimuli used to activate platelet response, and on the other hand there are several approaches to measure the outcome of the activation. A number of possible combinations of activation factors with measurement approaches result in the aforementioned heterogeneity. The aim of this review is to present the most often used protocols in a systematic way depending on the stimulus used to activate platelets. By providing examples of studies performed with each of the protocols, we attempt to explain why a particular combination of stimuli and measurement method was applied to study a given aspect of platelet biology.
Keywords: platelets; intravital studies; thrombosis; atherosclerosis; inflammation; metastasis platelets; intravital studies; thrombosis; atherosclerosis; inflammation; metastasis

Platelets are non-nucleated components of blood. Their best recognized physiological function is primary hemostasis, i.e., formation of the hemostatic plug in the site of blood vessel injury. The plug not only limits blood extravasation, but it also creates a procoagulant surface on which the coagulation cascade develops to form fibrin mesh which stabilizes the plug. Effective formation of the hemostatic plug is assured by the ability of platelet to adhere to the site of injury and by firm binding to adjacent platelets. Such a profound phenotype switch from a circulating blood component to an element of a structure which withholds blood outflow demands significant alterations in platelet biochemistry. These alterations are generally termed platelet activation. This process involves the change of platelet shape, driven by reorganization of cytoskeleton; modification of membrane receptors’ affinity; and release of certain factors, which by acting on adjacent platelets facilitate their activation.
Much of our current understanding of platelet biology and platelet’s contributions to thrombus formation is derived from in vitro or ex vivo experiments in which platelet aggregation in response to selected stimuli or platelet adhesion to various molecules under static or under flow conditions is measured. These approaches provided information on platelet biochemistry and intracellular signaling pathways which are activated upon platelet stimulation. In vitro approaches, however, have certain drawbacks. Platelets are very susceptible to manipulations which accompany the collection of blood samples and their preparation for experimental procedures. Such manipulations, which include blood withdrawal from the vessel and cell isolation either by centrifugation or by gel filtration, may lead to artifactual platelet activation [1]. Moreover, under in vitro conditions, platelets are devoid of the influence of natural suppressors of platelet activation produced by the vascular endothelium, such as nitric oxide and prostacyclin. This may also lead to a bias of the results obtained under in vitro conditions. For these reasons, the knowledge acquired under in vitro conditions is often verified by in vivo studies in animal models.
Platelet biology owes to intravital studies not only a better understanding of platelets’ role in primary hemostasis but also the findings that platelets are important factors in inflammation and atherosclerosis.
There is a heterogeneity among research protocols used in intravital studies of platelets, due to the variety of aspects of platelet function that are studied. The choice of the research protocol is driven first by a question of which aspect of platelet biological activity will be examined. This determines whether platelets should be activated by the researcher prior to measuring their response or whether the researcher is interested in a native state of platelets. If activation is required, a proper stimulus must be chosen to relevantly simulate physiological or pathophysiological conditions to be investigated. Finally, platelet response must be quantified. The method of quantification depends on the manifestation of platelet activity, such as aggregation or adhesion, which is relevant in a given experimental setup.
The aim of this review is to present the most often used protocols by showing how they were applied to studies of various aspects of platelet biology. The majority of the protocols that are described in the literature can be roughly divided into three categories based on the procedure applied by the researcher to activate platelet response (Figure 1).
The first category consists of the protocols wherein thrombosis is induced by means of a controlled injury to the vascular wall. The second category consists of protocols wherein platelet activation is triggered by the systemic injection of a specific agonist. Both of the two aforementioned groups of protocols serve to study the mechanisms of thrombosis and to test the efficacy of potential antiplatelet and antithrombotic compounds. The third category, which is the most heterogeneous, includes studies aimed at interactions of platelets with the mechanically intact vascular wall. These protocols are most often applied in studies of the platelet’s role in inflammation, atherosclerosis development or metastasis.

3. Platelet Activation by Systemic Application of an Agonist

4. Studies on the Platelet Interaction with the Intact Vascular Wall

Intravital methods allowed the researchers to better understand the numerous aspects of platelet biology, ranging from the mechanisms that govern platelet adhesion and aggregation during the thrombus formation to their contributions to the phenomena which are not directly associated with blood clotting, such as inflammation, atherosclerosis and metastasis. Although there are controversies regarding the relevance of some experimental models to the physiological conditions, it is undeniable that they provide better approximations of these conditions than in vitro approaches. However, there are several aspects of in vivo studies which still require development and improvement. One of them is the elaboration of biological models to better reflect pathophysiological conditions of thrombosis than the existing models. This also includes standardization and unification of the procedures between laboratories. Another aspect that needs to be addressed is the quantification of data obtained with the use of microscopic techniques. This applies specifically to the evaluation of platelet adhesion to the vascular wall. Standardization of criteria applied to calculations of immobilized and tethered platelets will facilitate comparison of the results between different laboratories.
Rapid development of microscopic imaging methods, and non-invasive macroscopic imaging techniques based on bioluminescence, magnetic resonance or computer tomography, will further improve in vivo studies. Therefore, it can be expected that intravital techniques will provide a tool for expanding our knowledge on platelet biology, and thus it will help to improve the development of novel therapies in cardiovascular diseases, inflammation or cancer.
At the same time, with great developments in sophisticated in vitro approaches such as lab-on-a-chip and organ-on-a-chip, it may be expected that a considerable part of research in the field of thrombosis will be performed in these setups rather than in animal models.

This research was funded by TEAM/2016-1/8 project carried out within the TEAM programme of the Foundation for Polish Science co-financed by the European Union under the European Regional Development Fund. 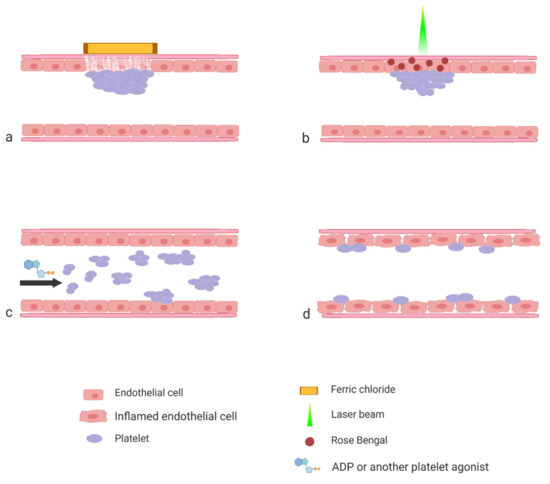