The neuronal ceroid lipofuscinoses (NCLs) collectively constitute one of the most common forms of inherited childhood-onset neurodegenerative disorders. They form a heterogeneous group of incurable lysosomal storage diseases that lead to blindness, motor deterioration, epilepsy, and dementia. Traditionally the NCL diseases were classified according to the age of disease onset (infantile, late-infantile, juvenile, and adult forms), with at least 13 different NCL varieties having been described at present. The current review focuses on classic juvenile NCL (JNCL) or the so-called Batten (Batten-Spielmeyer-Vogt; Spielmeyer-Sjogren) disease, which represents the most common and the most studied form of NCL, and is caused by mutations in the CLN3 gene located on human chromosome 16. Most JNCL patients carry the same 1.02-kb deletion in this gene, encoding an unusual transmembrane protein, CLN3, or battenin. Accordingly, the names CLN3-related neuronal ceroid lipofuscinosis or CLN3-disease sometimes have been used for this malady. Despite excessive in vitro and in vivo studies, the precise functions of the CLN3 protein and the JNCL disease mechanisms remain elusive and are the main subject of this review. Although the CLN3 gene is highly conserved in evolution of all mammalian species, detailed analysis of recent genomic and transcriptomic data indicates the presence of human-specific features of its expression, which are also under discussion. The main recorded to date changes in cell metabolism, to some extent contributing to the emergence and progression of JNCL disease, and human-specific molecular features of CLN3 gene expression are summarized and critically discussed with an emphasis on the possible molecular mechanisms of the malady appearance and progression. View Full-Text
Keywords: neuronal ceroid lipofuscinoses; juvenile Batten disease; JNCL; CLN3; CLN3 gene regulation; biomarker POLR2J2; molecular mechanisms neuronal ceroid lipofuscinoses; juvenile Batten disease; JNCL; CLN3; CLN3 gene regulation; biomarker POLR2J2; molecular mechanisms
►▼ Show Figures 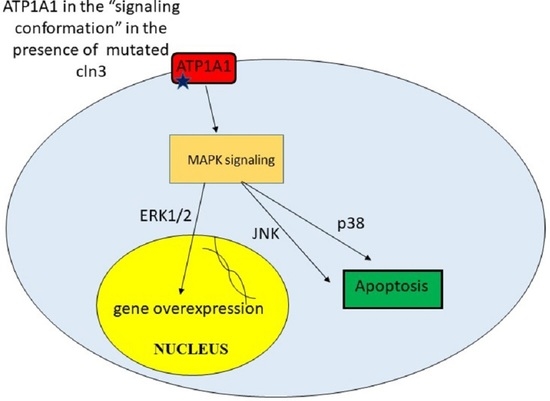