The Role of Zinc in Male Fertility

Stroke is a leading cause of death and disability worldwide and represents a significant public health concern along with a large socio-economic burden on healthcare systems [1]. In South Korea, one in 40 adults are stroke patients, and 232 people in 100,000 experience a stroke event annually. Stroke mortality is gradually declining but remains high at 30 deaths per 100,000 individuals [2].
Currently, recombinant tissue plasminogen activator (r-tPA) is the only therapeutic agent approved by the Food and Drug Administration to treat patients with acute ischemic stroke. However, r-tPA involves highly restrictive inclusion criteria, and the clinical benefits only manifest upon administration within 4.5 h of stroke onset. Therefore, r-tPA has a narrow time window and a small proportion of eligible patients. Furthermore, serious neurological sequelae after using r-tPA remain in many cases. Moreover, to date, there remains no definitive treatment to regenerate damaged brain cells in order to restore neurological deficits following stroke.
Recently, stem cell therapies using different cell types, such as mesenchymal stem cells (MSCs), bone marrow mononuclear cells, and neural stem cells, have emerged as a promising regenerative treatment for stroke survivors with residual deficits [3,4,5]. Among these, MSCs as adult stem cell haves been extensively investigated experimentally due to their easy isolation and amplification, multipotent differentiation capacity, low immunogenicity, and their potential for paracrine and immunomodulatory functions [6,7]. The effectiveness of MSC-based treatment in stroke animal models has been demonstrated [5,8]; however, their efficacy in clinical trials involving stroke patients is controversial [9]. To address this limitation, genetically engineered MSCs for functional augmentation of various factors, such as brain-derived neurotrophic factor or glial-derived neurotrophic factor, have been investigated [6,7,10].
Chemokines (chemoattractant cytokines) are a superfamily of structurally related pro-inflammatory peptides that mediate cell-specific, directed migration of leukocytes into sites of inflammation [10]. C–C motif chemokine ligand 2 (CCL2) belongs to the C–C chemokine family, and its effects are mediated through C–C motif receptor 2 (CCR2). A recent report indicated that CCL2 is associated with neurological repair after stroke and delivery of various cells into the brain via CCL2/CCR2 interaction [11,12]. Therefore, in the present study, we evaluated the potential therapeutic effect and safety of CCL2-overexpressing MSCs in a highly relevant animal stroke model.

To investigate the therapeutic efficacy of CCL2-overexpressing hUC-MSCs, we performed behavioral testing of each treatment group seven times during the 28-day study period. The results of the modified neurological severity score (mNSS) test revealed that the MAN group showed no significant behavioral changes relative to the control group, whereas the M-MSC group showed slight functional improvement in all three behavioral tests (p > 0.05). However, compared with the other groups, the CCL2-MSC group showed significant functional improvement starting from 1-day post-transplantation that remained robust after the second transplant and was sustained to the last day of the test (p < 0.01) (Figure 2A). Similarly, in the stepping test, the CCL2-MSC group showed gradual improvement of forelimb dysfunction from one-day post-transplantation relative to the other groups, with this recovery maintained for up to 28 days (p < 0.01) (Figure 2B). Moreover, for the foot-fault test, the CCL2-MSC group showed significantly reduced step errors from 7- to 21-days post-transplantation relative to the other groups (p < 0.05) (Figure 2C).

2.4. CCL2 and CCR2 Levels are Elevated in the Brain During the Acute Ischemic Phase

2.5. Increased Engraftment of CCL2-Overexpressing hUC-MSCs in Areas of Upregulated CCR2 Levels in the Ischemic Brain

To investigate the increased engraftment of IV-administrated CCL2-overexpressing MSCs in the brain, we immunostained for Stem121, a marker of human neural stem cells, 1 day after the second transplantation (Figure 4C). The results indicated the presence of Stem121+ cells in both the M-MSC and CCL2-MSC groups, whereas Stem121+ cell was not observed the in control and MAN groups. This suggested that IV-transplanted mannitol-treated hUC-MSCs entered the brain parenchyma across the BBB. Interestingly, the number of invaded Stem121+ cells was significantly higher in the CCL2-MSC group relative to that in the M-MSC group (M-MSC vs. CCL2-MSC: 10.39% ± 1.48 vs. 15.8 ± 2.14; p < 0.01). Additionally, Stem121+ cells were predominantly detected in infarct and peri-infarct areas but sparsely detected in the contralateral normal hemisphere (data not shown). These results suggested that hUC-MSCs preferentially migrated to the infarct region, and that this activity was promoted by increased CCL2 and/or CCR2 levels.
To analyze the relationship between CCL2 or CCR2 level and CCL2-overexpressing hUC-MSC migration, we co-stained CCL2 or CCR2 and Stem121 on the day 5 after MCAo induction. The results showed no clear correlation between CCL2 expression and the Stem121 distribution (data not shown); however, Stem121+ cells in the CCL2-MSC group co-localized to greater degree with CCR2+ cells or were predominantly found in vicinities exhibiting elevated CCR2 levels as compared with observations in the M-MSC group (M-MSC vs. CCL2-MSC: 36.48 ± 6.06 vs. 64.95 ± 7.64; p < 0.01) (Figure 4D). These findings suggested that CCL2-overexpression induced MSC migration into areas exhibiting upregulated CCR2 areas due to CCL2/CCR2 interaction.

2.7. Transplantation of CCL2-Overexpressing hUC-MSCs Increases Angiogenesis in the Peri-Infarct Area

The pUCIDT-kan plasmid (2705bp) harboring CCL2 was purchased from Cosmo Genetech (Seoul, Korea). The plasmid also harbored green fluorescent protein (GFP), which allowed confirmation of transfection and CCL2 expression. The CCL2 plasmid was amplified in Escherichia coli DH5α cells and purified using a NucleoBond Xtra Midi Plus kit (Macherey-Nagel, Düren, Germany) according to manufacturer instructions. hUC-MSCs (2 × 106) were plated in T-75 flasks, and after a 24-h incubation at 37 °C in a CO2 incubator, Lipofectamine–stem-cell-mediated transfection was performed using reagents supplied by Invitrogen (Carlsbad, CA, USA) and according to their instructions. Prior to transfection, the cells were washed twice with phosphate-buffered saline, and the culture medium was changed to serum-free α-MEM. The first dilution of CCL2 plasmids was performed in 12-mL microtubes with 725 μL Opti-MEM (Cat. No. 31985; Gibco, Gaithersburg, MD, USA). In a separate tube, Lipofectamine was added to 725 μL Opti-MEM, followed by transfer of the plasmid mixture and incubation for 10 min at 20 °C to form a DNA-Lipofectamine–stem cell complex. The complex was added to hUC-MSCs, and the mixture was incubated at 37 °C in a CO2 incubator. After 6 h, the medium was supplemented with 10% serum, and after another 24 h, GFP expression was observed by fluorescence microscopy (LSM510; Carl Zeiss Microimaging Inc., München, Germany; Nikon Eclipse Ni; Nikon Instruments Inc., Melville, NY, USA), indicating successful transfection.

Male Sprague–Dawley rats (7-weeks old; 270–300 g) were purchased from Orient Bio (Orient Bio, Seongnam, Korea) and housed in a temperature- and humidity controlled room with a 12-/12-h light/dark cycle. Animals were allowed to acclimatize to the laboratory 1-week prior to surgery and had ad libitum access to food and water. Rats were anesthetized via intramuscular injection of ketamine and Rompun (3:1), followed by placement on a heating pad, limb fixation with tape, and monitoring of body temperature. The internal, external, and common carotid arteries (ECAs and CCAs, respectively) were exposed after midline skin incision in the right neck area, followed by ligation of CCA branches. After incision of the ECA, a filament coated with silicon (Doccol Corp., Sharon, MA, USA) was inserted 20 mm from the ECA through the carotid artery to block the MCA. After 60 min of occlusion, blood flow was restored in the CCA, and the MCA was reperfused by withdrawing filament. During the procedure, rectal temperature was maintained at 37 °C by heating surgical pad. The following day, the MCAo-induced rats were randomly divided into four groups (n = 10/group), (1) phosphate-buffered saline (PBS) group (control), (2) mannitol-treatment group (MAN), (3) mannitol+hUC-MSC-treatment group (M-MSC), and (4) mannitol+CCL2-overexpressing hUC-MSC-treatment group (CCL2-MSC).

The in vivo experiments are described in Figure 8. Mannitol, which is effective at increasing the permeability of the blood–brain barrier (BBB) [50], was injected prior to implantation. According to cell administration described in a previous study [47], intravenous (IV) mannitol (2.5 mL of 20% solution; injection speed: 1.0 mL/min) and either IV hUC-MSCs or IV CCL2-overexpressing hUC-MSCs (1 × 106 cells in 0.5 mL PBS) were carefully injected into the tail vein at two different transplantation time points (1- and 4-days post-MCAo induction) in the cell-transplantation group. Immunosuppressive drugs were not used. The PBS group received only IV PBS, and the MAN group received only IV mannitol without cell transplantation at the same time points. During the procedure, no profound bleeding occurred during transplantation, and vital signs in rats were stable. There were no perioperative complications (death or severe morbidity) in any of the four tested groups or significant changes in temperature and weight (data not shown). All rats, including those receiving CCL2-overexpressing hUC-MSC transplantation, survived during the experiment, supporting the safety of these hUC-MSCs.

Behavioral tests were performed independently by two blinded investigators at 1-, 2-, and 5-days after MCAo induction, followed by once weekly for up to four weeks. The mNSS test assessed scores according to analysis of motor, sensory, reflex, and balance deficits and ranged from 0 to 28. Higher scores indicate closer to severe conditions, whereas lower scores indicate normal conditions. Stepping tests to assess forefoot deficits were performed using a treadmill. Recovery of forefoot motor function was measured by counting the number of hand strokes on the bottom of the treadmill. For each forefoot test, the average of three times trials was used for analysis. Foot-fault tests measured forefoot motor impairment using a ladder (120-cm long with rungs 4-cm apart). The falling depth of the right forelimb was counted when the forelimb of the affected side slid, fell off of, or slipped between the rod, and scores were recorded as follows: fallen to the shoulder: 2; fallen to the ankle: 1; and normal walk: 0 [47].

At 4-weeks post-MCAo induction, infarct volume was measured in the independent MCAo model group using 2,3,5-triphenyltetrazolium chloride (TTC) and Cresyl Violet staining. The removed brain was cut at 1-mm intervals and stained with 2% TTC solution (n = 5/group), followed by fixation with 4% paraformaldehyde (PFA). The infarct volume of the MCAo model was also measured using Cresyl Violet staining of brain sections in each group. The infarct size was measured as a percentage of the intact hemisphere using the following formula: Infarct size (%) = [1 − (area of remaining ipsilateral hemisphere/area of intact contralateral hemisphere)] × 100. The size of the infarct region was measured with Image J software (National Institutes of Health, Bethesda, MD, USA). Percentages of infarct size were summed from three sections per brain, and values obtained from TTC and Cresyl Violet staining were compared.

Vascular images detected by RECA-1 targeting to identify the vascular endothelium were transformed into a black-and-white image using VesSeg-Tool software (http://www.isip.uni-luebeck.de/index.php?id=150&L=0, Lübeck, Germany), with RECA-1+ areas shown in white calculated as a percentage of the total area.

This study was funded by the Ministry for Health, Welfare & Family Affairs, Republic of Korea (HI16C1559). 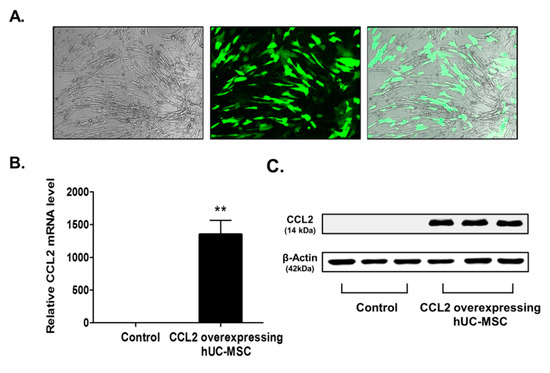 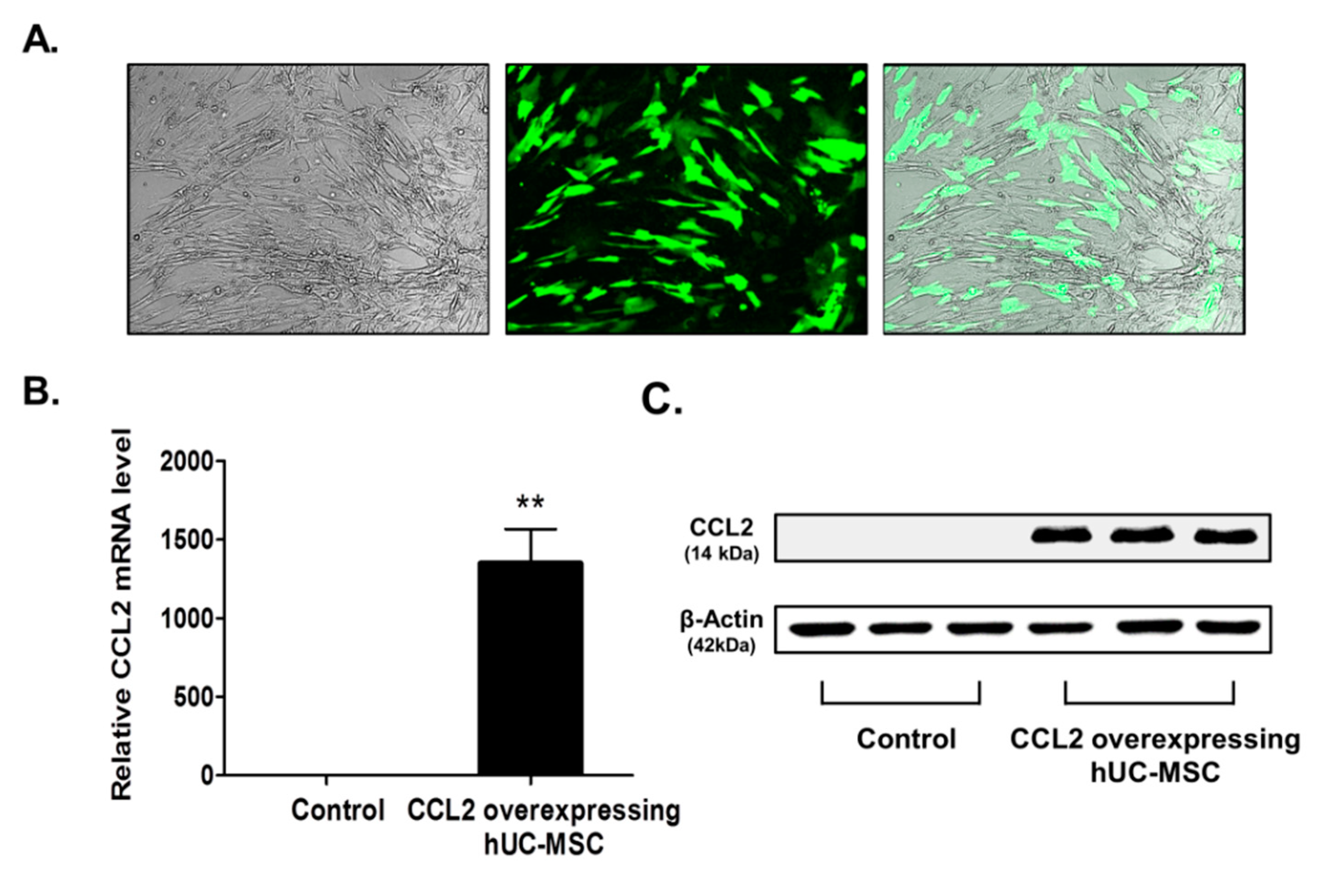 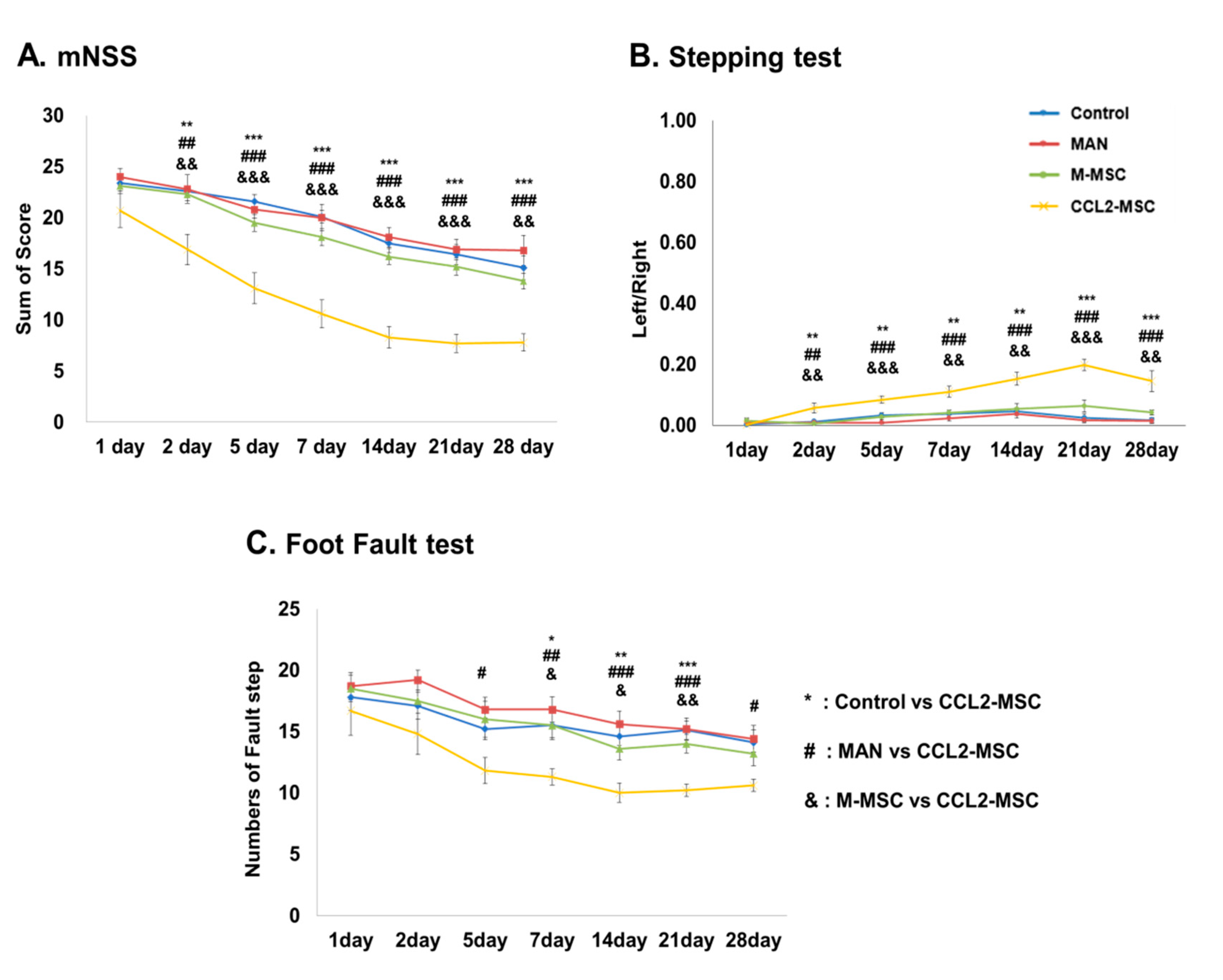 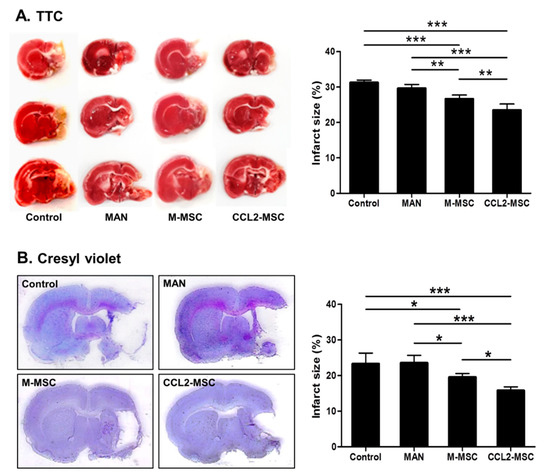 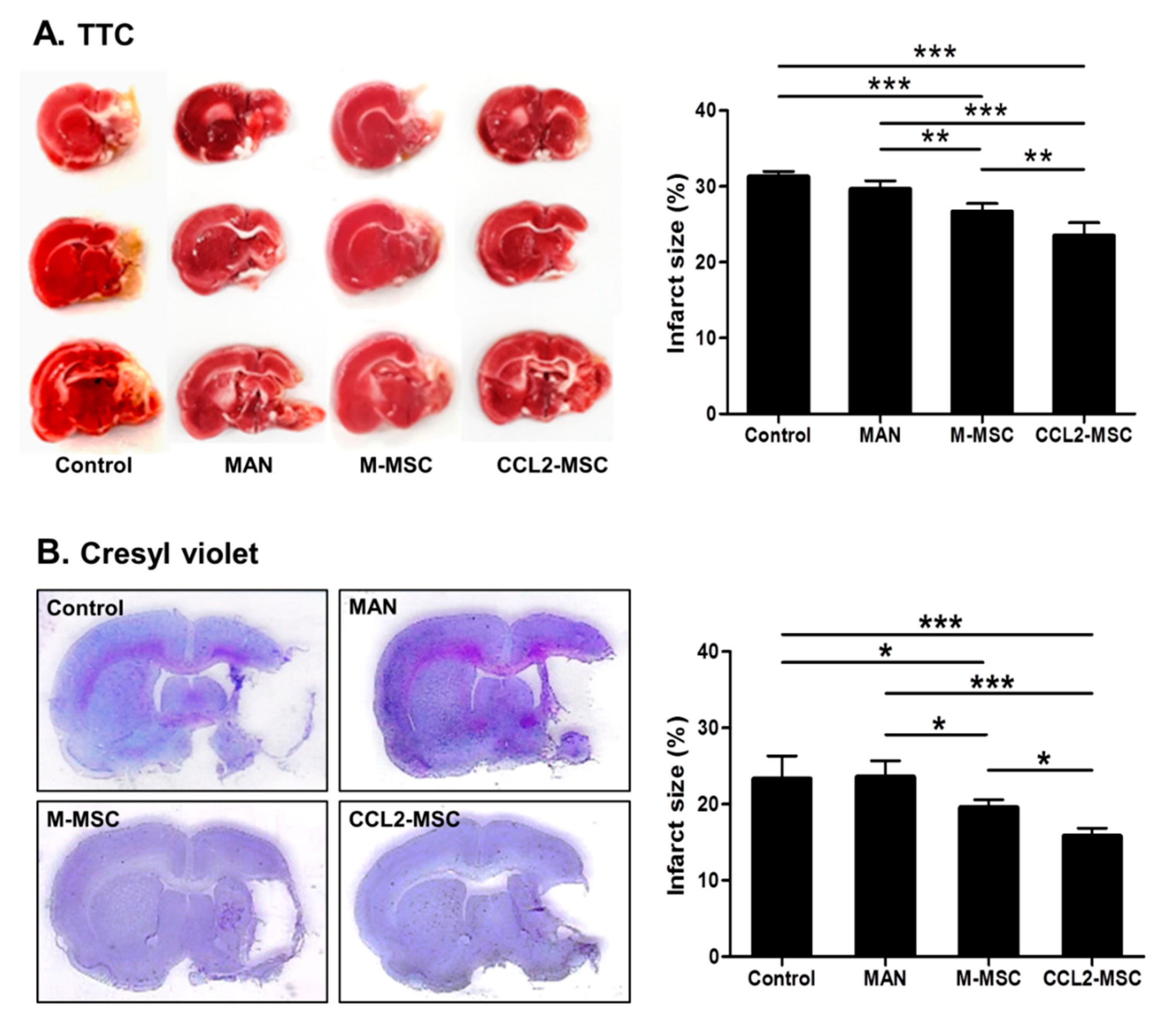 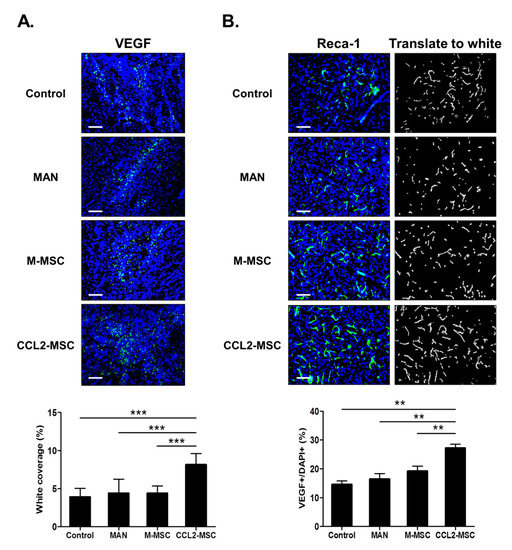 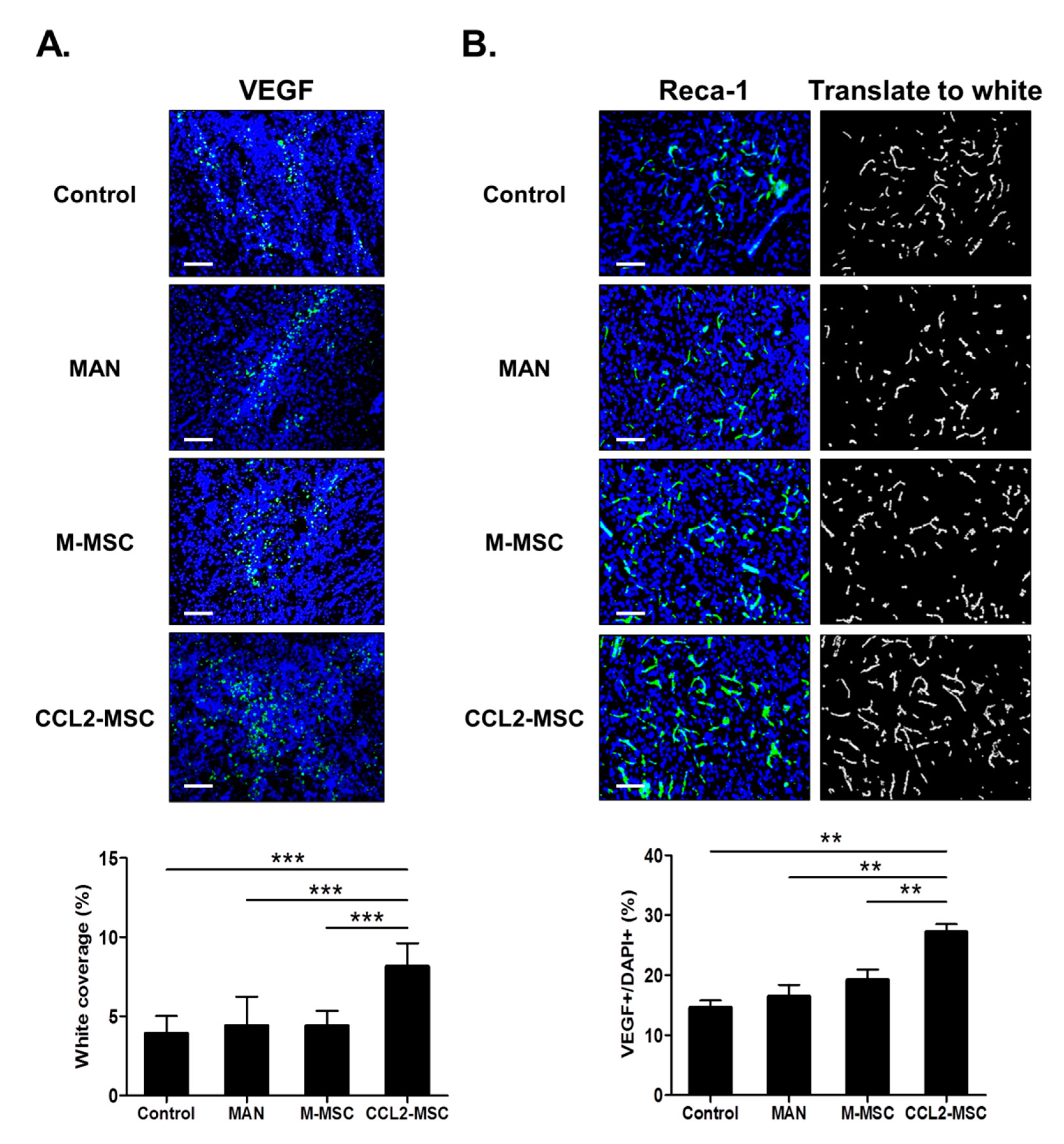 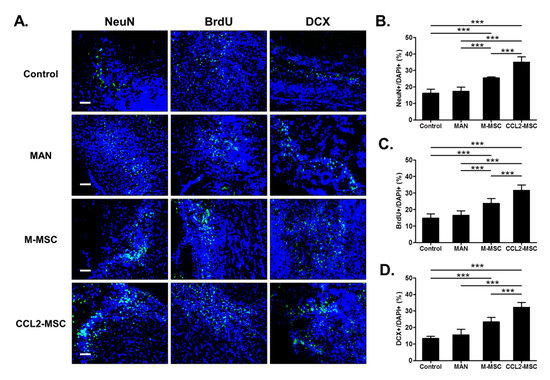 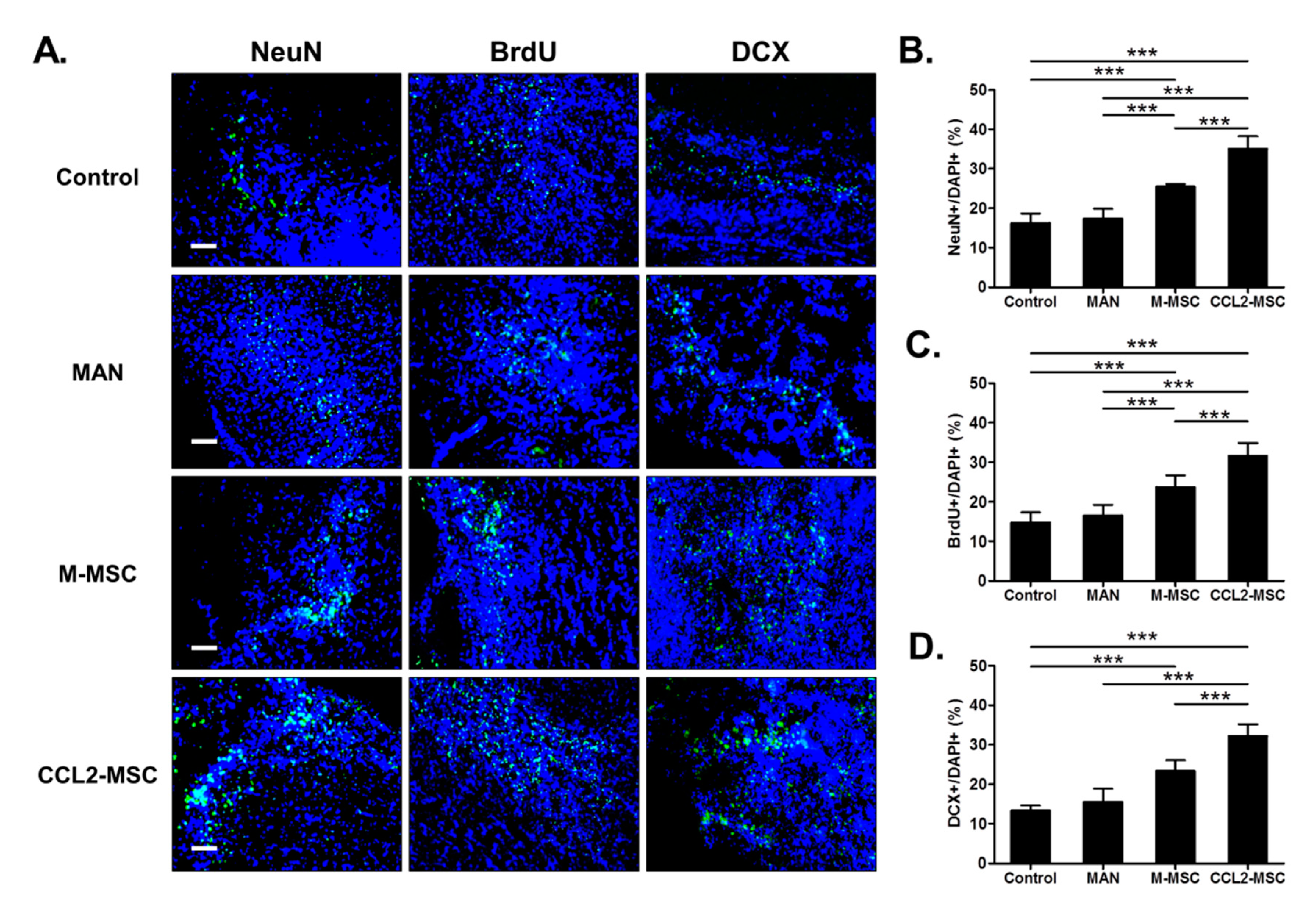 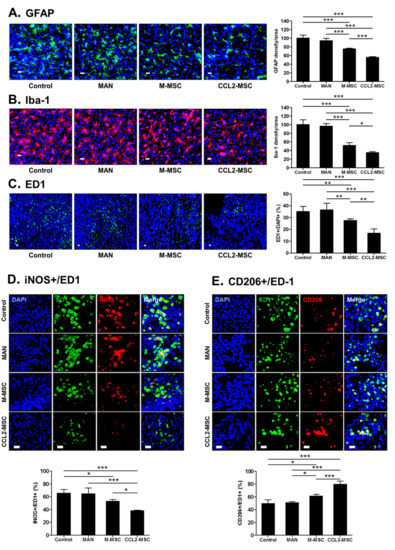 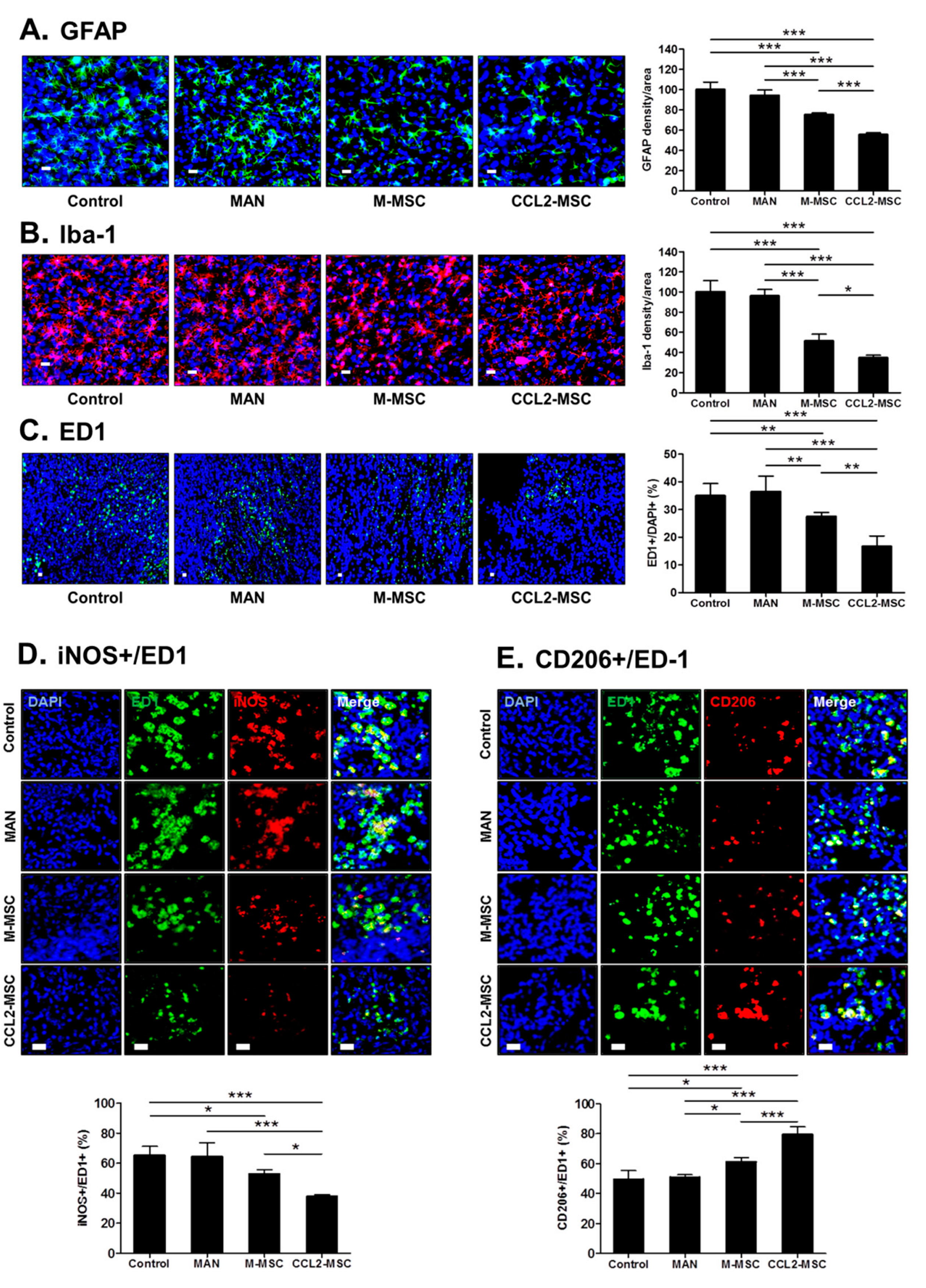