Advances in the Treatment and Prevention of Chemotherapy-Induced Ovarian Toxicity

Reprogramming of the genetic code system is limited by the difficulty in creating new tRNA structures. Here, I developed translationally active tRNA variants tagged with a small hairpin RNA aptamer, using Escherichia coli reporter assay systems. As the tRNA chassis for engineering, I employed amber suppressor variants of allo-tRNAs having the 9/3 composition of the 12-base pair amino-acid acceptor branch as well as a long variable arm (V-arm). Although their V-arm is a strong binding site for seryl-tRNA synthetase (SerRS), insertion of a bulge nucleotide in the V-arm stem region prevented allo-tRNA molecules from being charged by SerRS with serine. The SerRS-rejecting allo-tRNA chassis were engineered to have another amino-acid identity of either alanine, tyrosine, or histidine. The tip of the V-arms was replaced with diverse hairpin RNA aptamers, which were recognized by their cognate proteins expressed in E. coli. A high-affinity interaction led to the sequestration of allo-tRNA molecules, while a moderate-affinity aptamer moiety recruited histidyl-tRNA synthetase variants fused with the cognate protein domain. The new design principle for tRNA-aptamer fusions will enhance radical and dynamic manipulation of the genetic code. View Full-Text
Keywords: genetic code; anticodon; pseudo-anticodon; amber suppression genetic code; anticodon; pseudo-anticodon; amber suppression
►▼ Show Figures 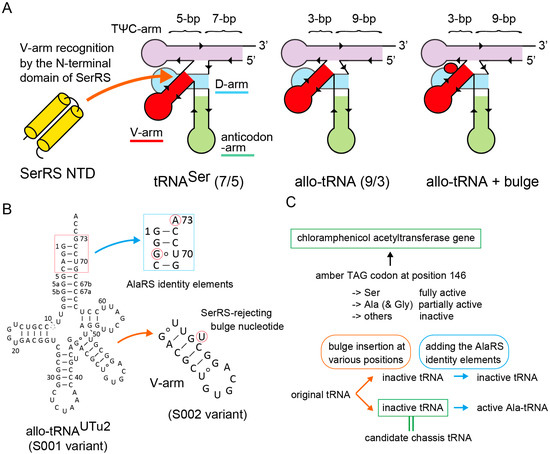