Two wild-type field populations of root-knot nematodes (Mi-Vfield, Mj-TunC2field), and two isolates selected for virulence in laboratory on resistant tomato cultivars (SM2V, SM11C2), were used to induce a resistance reaction in tomato to the soil-borne parasites. Epigenetic and metabolic mechanisms of resistance were detected and compared with those occurring in partially or fully successful infections. The activated epigenetic mechanisms in plant resistance, as opposed to those activated in infected plants, were detected by analyzing the methylated status of total DNA, by ELISA methods, and the expression level of key genes involved in the methylation pathway, by qRT-PCR. DNA hypo-methylation and down-regulation of two methyl-transferase genes (CMT2, DRM5), characterized the only true resistant reaction obtained by inoculating the Mi-1.2-carrying resistant tomato cv Rossol with the avirulent field population Mi-Vfield. On the contrary, in the roots into which nematodes were allowed to develop and reproduce, total DNA was generally found to be hyper-methylated and methyl-transferase genes up-loaded. DNA hypo-methylation was considered to be the upstream mechanism that triggers the general gene over-expression observed in plant resistance. Gene silencing induced by nematodes may be obtained through DNA hyper-methylation and methyl-transferase gene activation. Plant resistance is also characterized by an inhibition of the anti-oxidant enzyme system and activation of the defense enzyme chitinase, as opposed to the activation of such a system and inhibition of the defense enzyme glucanase in roots infested by nematodes. View Full-Text
Keywords: antioxidant enzymes; DNA methylation; epigenetics; plant resistance; root-knot nematodes; ROS; tomato antioxidant enzymes; DNA methylation; epigenetics; plant resistance; root-knot nematodes; ROS; tomato
►▼ Show Figures 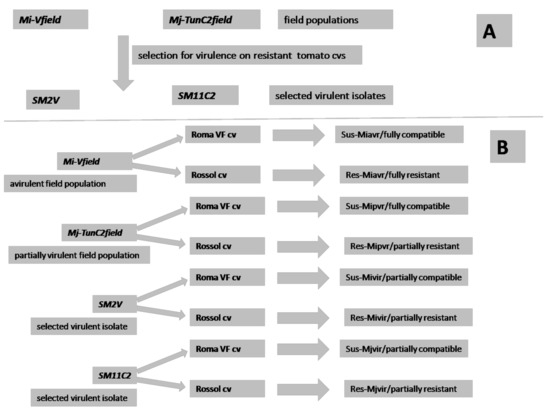