Synthesis, CYP24A1-Dependent Metabolism and Antiproliferative Potential against Colorectal Cancer Cells of 1,25-Dihydroxyvitamin D2 Derivatives Modified at the Side Chain and the A-Ring
Next Article in Special Issue

Chlorinated Auxins—How Does Arabidopsis Thaliana Deal with Them?
Previous Article in Journal

Comparing and Contrasting the Multiple Roles of Butenolide Plant Growth Regulators: Strigolactones and Karrikins in Plant Development and Adaptation to Abiotic Stresses

Jatropha curcas L. is monoecious with a low female-to-male ratio, which is one of the factors restricting its seed yield. Because the phytohormone cytokinins play an essential role in flower development, particularly pistil development, in this study, we elevated the cytokinin levels in J. curcas flowers through transgenic expression of a cytokinin biosynthetic gene (AtIPT4) from Arabidopsis under the control of a J. curcas orthologue of TOMATO MADS BOX GENE 6 (JcTM6) promoter that is predominantly active in flowers. As expected, the levels of six cytokinin species in the inflorescences were elevated, and flower development was modified without any alterations in vegetative growth. In the transgenic J. curcas plants, the flower number per inflorescence was significantly increased, and most flowers were pistil-predominantly bisexual, i.e., the flowers had a huge pistil surrounded with small stamens. Unfortunately, both the male and the bisexual flowers of transgenic J. curcas were infertile, which might have resulted from the continuously high expression of the transgene during flower development. However, the number and position of floral organs in the transgenic flowers were well defined, which suggested that the determinacy of the floral meristem was not affected. These results suggest that fine-tuning the endogenous cytokinins can increase the flower number and the female-to-male ratio in J. curcas. View Full-Text
Keywords: cytokinin; AtIPT4; JcTM6 promoter; flower development; bisexual flower; Jatropha curcas L. cytokinin; AtIPT4; JcTM6 promoter; flower development; bisexual flower; Jatropha curcas L.
►▼ Show Figures 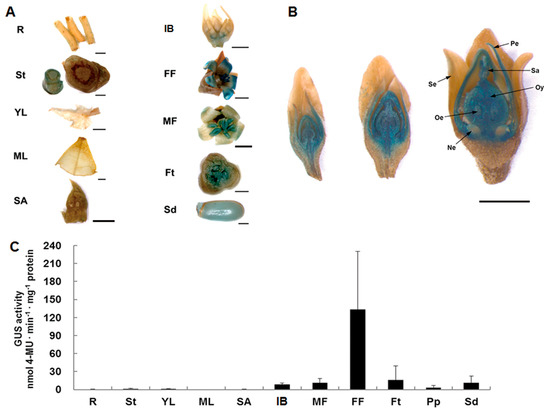